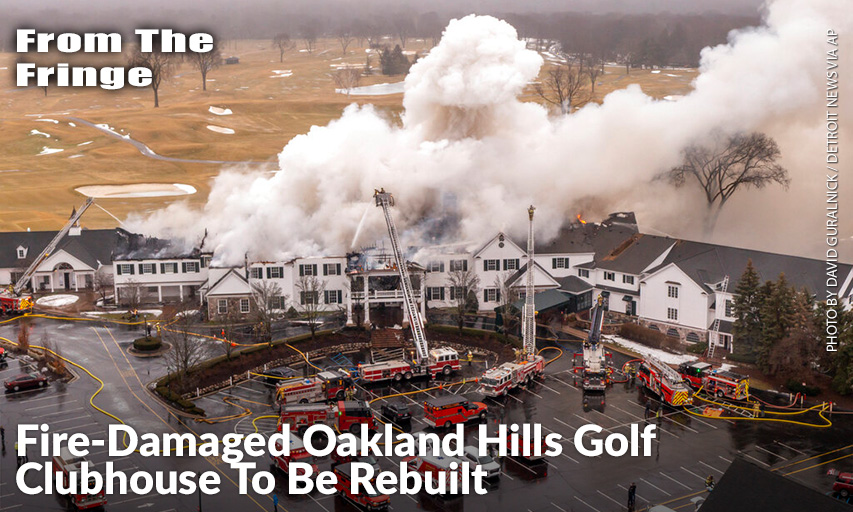 BLOOMFIELD TOWNSHIP, Michigan (AP) — The Oakland Hills Country Club’s century-old clubhouse, devastated by a fire, will be rebuilt and plans call for a replica of the stately white, pillared building that housed artifacts of some of golf’s biggest stars at the suburban Detroit course.

Rick Palmer, president of the Oakland Hills Country Club, said that board members who met “unanimously made an easy decision to determine that the restored, rebuilt clubhouse will be a replica of what the iconic clubhouse was before the fire.”

Palmer said there’s no timetable for when the rebuilding would be completed, but he anticipated it would take “at least a couple of seasons.” He did not have an estimate of the project’s cost.

The clubhouse was built in 1922 and housed irreplaceable memorabilia and art from the nine major championships and the Ryder Cup that Oakland Hills has hosted over nearly a century.

A fire that started Thursday morning in the clubhouse’s attic space spread quickly throughout much of the 90,000-square-foot facility, with flames several feet high burning for several hours.

Firefighters and club officials saved some artifacts and memorabilia. Those rescued items included replica trophies of the club’s many major tournaments, including six U.S. Opens, three PGA Championships and a Ryder Cup, housed in a prized trophy case.

The fire’s cause has not been determined and remains under investigation.