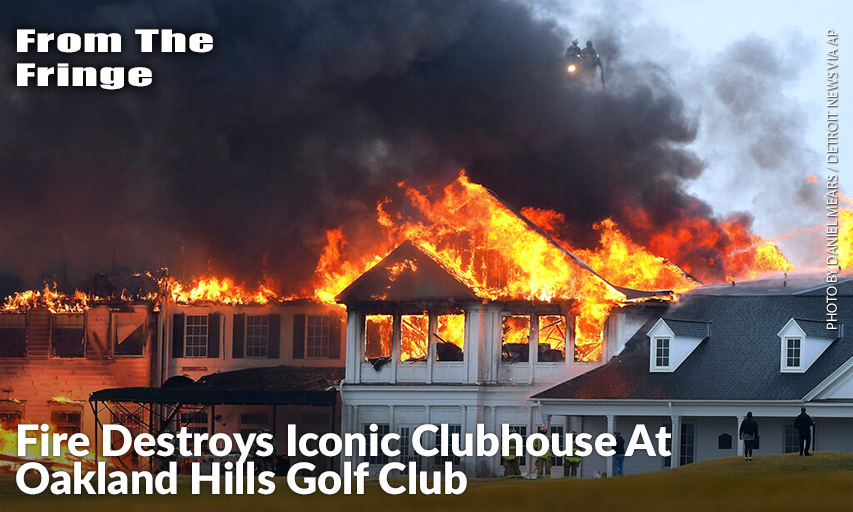 BLOOMFIELD TOWNSHIP, Michigan (AP) — A devastating fire swept through the century-old clubhouse at Oakland Hills Country Club, the suburban Detroit course that housed artifacts of some of golf’s biggest stars and the championships they won there.

Flames ripped through the roof at the sprawling, multi-story clubhouse. It was built in 1922 and housed irreplaceable memorabilia and art from the nine major championships and the Ryder Cup that Oakland Hills has hosted over nearly a century.

No injuries were reported. The cause of the fire wasn’t immediately known. Fire officials said the 110,000-square-foot clubhouse was among the largest wood structures in Michigan.

Oakland Hills opened in 1916 and has hosted six U.S. Opens — only two other courses have held it more times. The most famous was in 1951 when Ben Hogan won and later proclaimed, “I’m glad I brought this course, this monster, to its knees.” The “monster” became the moniker for Oakland Hills over the years.

Palmer thanked firefighters who saved some priceless memorabilia during a “gut-wrenching day.”

“Only time will tell what is next, but we will move forward with a purpose to honor all those who made this grand building come to life with their golf and their work,” he said.

“Our thoughts are with our friends at Oakland Hills. ... We will support the club wherever possible in this rebuilding process,” said John Bodenhamer, chief championships officer at the United States Golf Association.