PGA TOUR, The Memorial Tournament Presented By Nationwide Announce Event To Be Held Without Spectators 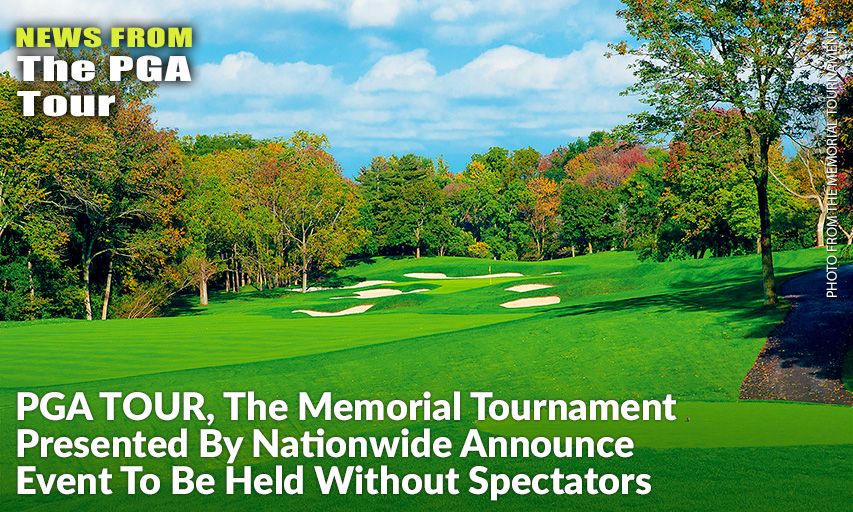 The PGA TOUR and the Memorial Tournament presented by Nationwide announced that despite a robust health and safety plan and State of Ohio approval for limited patron attendance, the world-renowned event founded and hosted by Jack Nicklaus will instead be held without fans on site and with no pro-am, due to the rapidly changing dynamics of the COVID-19 pandemic.

The news comes as many of the world’s best players arrive at Muirfield Village Golf Club for an unprecedented two-week swing at the “Course that Jack Built” — the Workday Charity Open this week, followed by the Memorial Tournament presented by Nationwide, with the 45th edition of the Tournament being staged July 14-19.

“We applaud the leadership, diligence and partnership it took from Jack Nicklaus, Dan Sullivan, the entire Memorial Tournament staff and State, County and City leadership to build a solid plan that would allow for limited fan attendance at next week’s event,” said PGA TOUR Commissioner Jay Monahan. “But given the broader challenges communities are facing due to the ongoing COVID-19 pandemic, we need to stay focused on the No. 1 priority for our Return to Golf — the health and safety of all involved.  While this was a difficult decision, it was one made collectively, and we are appreciative of the process undertaken to this point that will allow us to welcome on-site fans when the time is right.  In the meantime, we have no doubt that the Memorial Tournament will once again be an incredible championship and deliver the best competitive environment for our players and utmost entertainment to our fans around the world.”

After Ohio Governor Mike DeWine approved in mid-June a phased approach to allowing on-site fans and guests, Memorial Tournament officials announced several elements of their COVID-19 activation protocols designed to allow for a 20 percent maximum capacity on property, encompassing patrons and private venues, as well as essential staff needed to operate the Tournament.

“The Memorial Tournament team, led by Dan Sullivan, worked exhaustively on a plan that the Governor of Ohio, Mike DeWine, as well as other local, county and state leaders were comfortable with, confident in, and applauded,” Nicklaus said.  “We had a good plan in place, and I could not be more proud of everyone who contributed to it. In the end, we have the responsibility to recognize the health and safety of the players and all who attend the Memorial Tournament. We, in partnership with Nationwide and the PGA TOUR, will now focus on presenting the best-possible Memorial Tournament we can for the players and for the many fans watching at home and around the world on Golf Channel and CBS."

Nationwide, which has been the Tournament sponsor for 10 years, has been both supportive and instrumental throughout the planning process, since the Memorial date change in March in conjunction with the PGA TOUR’s adjusted tournament schedule.

“We understand and support the decision to have this year’s Memorial Tournament presented by Nationwide without spectators,” said Nationwide Chief Executive Officer Kirt Walker. “Although we can’t be there in person, we wish the players a great two weeks at Muirfield Village Golf Club and we look forward to supporting them on course, with fans, in the future.”

Executive Director Dan Sullivan had emphasized for weeks the need for all involved to remain flexible and understanding, as the coronavirus pandemic continued to evolve nationwide and in the State of Ohio.

“While we embraced the opportunity to be the first PGA TOUR event to welcome the return of on-site fans — and be a part of our nation’s collective reemergence from the COVID-19 crisis — we recognize the current increase in positive COVID-19 cases across the country and our ultimate responsibility,” said Sullivan. “We will host the 45th Memorial Tournament presented by Nationwide without patrons on-site and encourage all fans of the Memorial and the PGA TOUR to follow the competition through our collective social media channels and our broadcast partners. It’s disappointing to the many who have tirelessly worked to create a plan for on-site patrons, but I’m confident the learnings from these efforts will contribute to golf’s continued success, and we’re excited to showcase Muirfield Village Golf Club — and ultimately, the Memorial Tournament — to our fans over the next two weeks.”