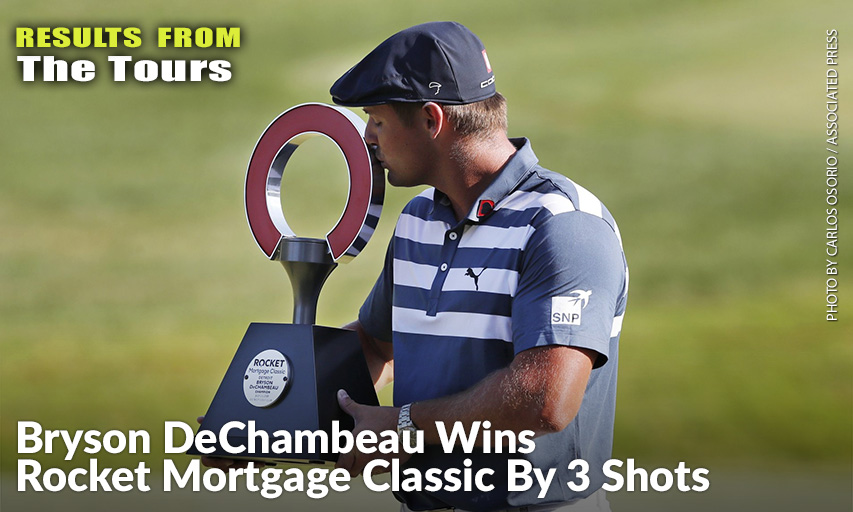 DETROIT, Michigan — Bryson DeChambeau pounded protein shakes and lifted iron to transform his body, adding 40 pounds of mass, and changed his game to put a premium on power.

The plan is working.

With jaw-dropping drives and some clutch putts, DeChambeau won the Rocket Mortgage Classic by three strokes for his first victory of the season and sixth overall. He became the first PGA Tour player since 2004 to lead a tournament in driving distance, along with shots gained off the tee and putting.

“This is a little emotional for me because I did do something a little different,” the 26-year-old DeChambeau said. “I changed my body, changed my mindset in the game and I was able to accomplish a win while playing a completely different style of golf. And, it’s pretty amazing to see that. I hope it’s an inspiration to a lot of people.”

DeChambeau shot a 7-under 65 at Detroit Golf Club, birdieing four of the first seven holes and closing with three straight. He finished at a career-best 23-under 265.

Matthew Wolff (71) was second. He started the day with a three-shot lead and hurt his chances with five bogeys over his first 10 holes. Kevin Kisner (66) finished another stroke back as part of a relatively weak field that continued to trend of exceptional play since the PGA Tour restarted.

“The level of play on tour in these first four weeks has been incredible, cuts at 4 and 5 under every week,” Kisner said.

With a strong finish, DeChambeau removed all doubt that he would win the second Rocket Mortgage Classic.

He made a 30-foot birdie putt at No. 16, which he said was his shot of the day. He also had a short putt for birdie on the next hole. And finally, he uncorked a 367-yard drive to set up another short putt at 18.

DeChambeau came into the week with six straight top-eight finishes and was the only player with top 10s in the first three events after the restart from the coronavirus pandemic. He won for the first time since the Shriners Hospitals for Children Open in November 2018.

DeChambeau has dramatically altered his body, packing about 240 pounds on his 6-foot-1 body, and took advantage of the extra time he had to work on his physique during the COVID-19 pandemic.

“He understands what is the key to gaining the biggest advantage and that’s distance, and mega distance,” Kisner said. “He just has too much time on his hands. He needs to start getting married and having kids and feel like the rest of us.”

DeChambeau’s power was on full display in the Motor City with drives that went 351 yards on average after looking like he might swing out of his spikes.

When DeChambeau was on the tee box at the 399-yard, par-4 13th, he waited for the next group to leave the green before hitting his drive so that he didn’t hit any fellow competitors.

“No, I’ve never done that,” he acknowledged. “I really could have gotten there.”

His drive on the 621-yard, par-5 fourth went way left and landed in greenside rough on an adjacent hole. He cleared towering trees and landed just short of the green, sending his approach 276 yards and he two-putted from 37 feet.

“That was probably my second best moment of the day,” DeChambeau said. “I got really quite honestly pretty lucky being able to get over these trees and let it land and roll onto the front edge of the green.”

As his body and power becomes a fixation for those who follow golf, more eyes are on him and it bothered him during the third round.

On Saturday, DeChambeau had a testy exchange with a TV cameraman after a bogey on the sixth hole. After the third round, he bristled that it isn’t right showing a potential vulnerability and hurting someone’s image.

DeChambeau, though, tried to soften his stance on the issue Sunday by saying the cameraman was just trying to do his job.

During the final round, he was also briefly distracted by a commotion outside the course.

While a Black Lives Matter protests was gathering outside the Detroit Golf Club, breaking the silence of the fan-free event with chants and air horns, DeChambeau took some time to reset before hitting a 366-yard drive.

“I know there’s a lot of strife and trouble going on right now,” he said. “I love that everybody’s voicing their opinion and I think that they deserve to do so.

“We’re golfers here trying to provide the best entertainment. I think that’s the most important thing that we can do.”