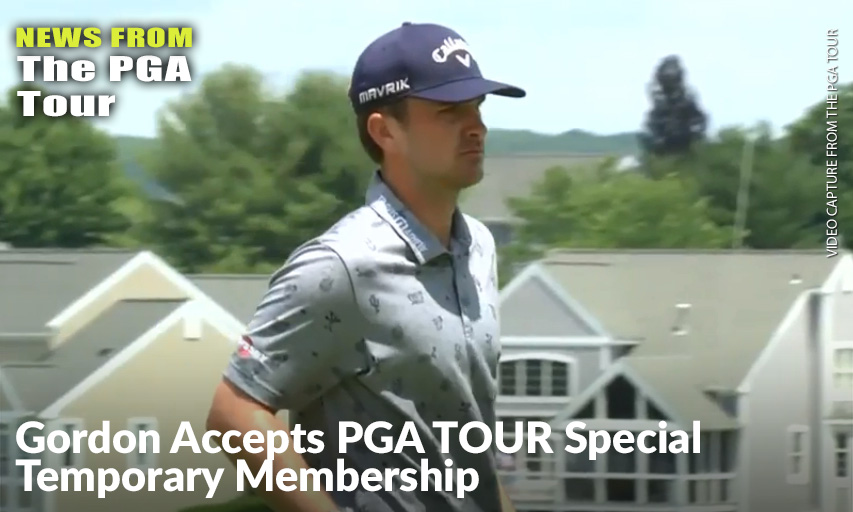 Playing on a sponsor exemption at the Travelers Championship, Gordon shot a second-round 62 and finished in a tie for third, earning 163 non-member FedExCup points to secure Special Temporary Membership. Gordon has made seven starts on the season and collected an additional top-10 at The RSM Classic in November 2019.

In May, the Korn Ferry Tour announced modifications to the 2020 schedule and a fall calendar of events that would be part of a one-time, combined 2020-21 Korn Ferry Tour season. The adjustments resulted in the loss of a graduating class via the Korn Ferry Tour in 2020, and pushed the next available Qualifying Tournament to 2021. In turn, Gordon’s only paths to the PGA TOUR for the 2020-21 season are through the non-member FedExCup points list or a victory on TOUR.

Gordon made nine starts on Mackenzie Tour-PGA TOUR Canada during the 2019 season, making eight cuts and earning two top-10 finishes to end the season No. 21 on the Order of Merit. A graduate of Vanderbilt University, Gordon was named the 2019 SEC Player of the Year as a senior and turned professional following his graduation.

About the PGA TOUR
By showcasing golf’s greatest players, the TOUR engages, inspires and positively impacts our fans, partners and communities worldwide.

The PGA TOUR, headquartered in Ponte Vedra Beach, Florida, co-sanctions more than 130 tournaments on the PGA TOUR, PGA TOUR Champions, Korn Ferry Tour, PGA TOUR Latinoamérica, Mackenzie Tour-PGA TOUR Canada and PGA TOUR Series-China. Members on the PGA TOUR represent the world’s best players, hailing from 29 countries and territories (93 members are from outside the United States). Worldwide, PGA TOUR tournaments are broadcast to 226 countries and territories in 23 languages. Virtually all tournaments are organized as non-profit organizations to maximize charitable giving. In 2019, tournaments across all Tours generated a record $204.3 million for local and national charitable organizations, bringing the all-time total to more than $3 billion.

Fans can follow the PGA TOUR on PGATOUR.COM, the No. 1 site in golf, on the PGA TOUR app and on social media channels, including Facebook, Instagram (in English, Spanish and Korean), LinkedIn, Twitter, WeChat, Weibo, Toutiao and Douyin.