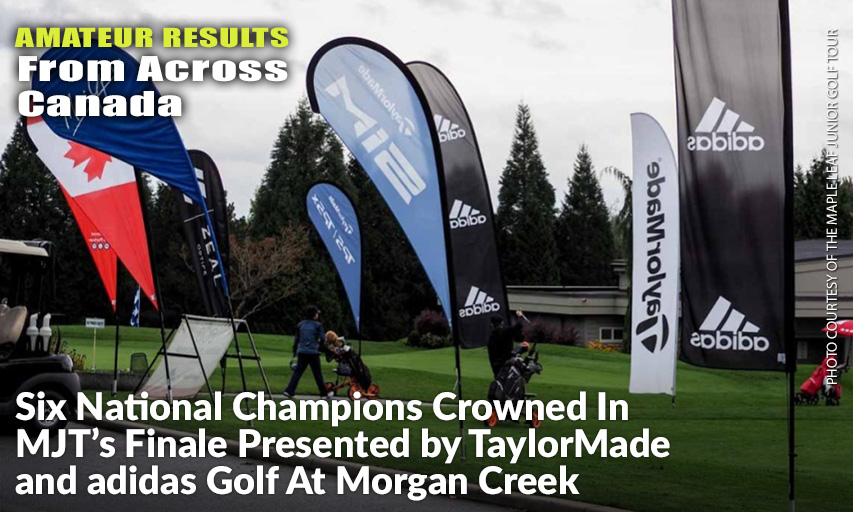 SURREY, British Columbia — For the first time in more than 10 years, Canada’s number-one played Junior Golf Tour, the non-profit Maple Leaf Junior Golf Tour, held its prestigious MJT National Championship in Canada versus the United States, selecting the pristine Morgan Creek Golf Club in Surrey, BC, as the host venue to a practice round followed by three rounds of competition. The third and final round of the TaylorMade and adidas Golf-presented event play out under sunny skies, after heavy wind and rain on day two plagued the 108 elite young golfers from across Canada. The challenging conditions forced the cream to rise to the top with the crowning of six new divisional National Champions.

Tina Jiang, 15, of Richmond, BC, claimed the only under-par total score in the field, Low Overall Girls and the MJT Girls 15-19 National Champion’s title after coming from behind with absolutely outstanding scores of 69, 78, 70 (217) to win by one stroke over Luna Lu, 13, of Burnaby, BC (70, 75, 73=218). “The highlight of my tournament was my last winning putt,” Jiang stated. “Although the weather on the second day wasn’t great, the course was still in great condition, and it felt so good to win because all my work over this summer has led up to this pinnacle.” Third place went to Vanessa Zhang, 13, of Vancouver, BC, who fired 72, 79, 73 (224). Both Lu and Zhang play up a division.

Equally impressive results were recorded in the younger Girls division where no-one could catch 11-year-old Anna Huang of Vancouver after she blazed her way around Morgan Creek with two under par rounds and a final score of 72, 75, 72 (219) to win the MJT Girls U15 National Championship title. “I really enjoyed playing with amazing people, and MJT picked a great course that I will come to again soon,” Huang said. “I am happy about my score and I am confident about more tournaments in the future.” Ha Young Chang, 12, of Surrey, BC, finished second after carding 78, 81, 75 (234) and MJT Girls U15 Player of the Year, Yeji Kwon, 14, of Port Coquitlam, BC, placed third (82, 79, 76=237).

A nail-biting finish took place in the MJT Junior Boys division where Ilirian Zalli, 18, of Vancouver, BC, exhibited his trademark steely reserve to came from behind, finishing birdie, birdie, par to win the MJT Junior Boys National Championship and Low Overall Boys title. Zalli, who fired rounds of 74, 75, 71 (220) from the back tees, said, “Coming back from one down with three to play was the biggest moment of my week, to be able to play big down the stretch was fantastic. I feel so pleased to win the championship especially considering this is my final year to play.” A stellar effort by runner-up Nicolas-Guy Landry, 18, of Calgary, AB, (73, 74, 75=222) came up just short, while Dylan Norrey, 17, of Oakville, ON, made a great charge with seven birdies in his final round to finish third with scores of 77, 75, 72 (224).

Danny Im, 16, of Langley, BC, put on a fine performance with a birdie, birdie finish, taking back his first-round lead to be crowned MJT Juvenile Boys National Champion. Im shot 72, 76, 73 (221), winning by five strokes over MJT Juvenile Boys Player of the Year, Cooper Humphreys, 15, of Kelowna, BC (73, 74, 79=226). “I knew many good players played this event and to win this feels very good,” said Im. “I enjoyed meeting people and playing a great golf course.” Finishing with the low round for the division, which vaulted him into third place, was 16-year-old Hunter Kutcher of Regina, SK, (79, 78, 71=228).

Full results and a professionally taken photo gallery of the tournament can be viewed here. All participants received generous gifting courtesy TaylorMade and adidas Golf, and top finishers were again rewarded with fabulous prizing from MJT Partners TaylorMade, adidas Golf, Maui Jim and Zeal. Bloom Education, MJT Official Education and Career Counseling Partner, were on site for free consultations regarding the current collegiate situation in both the USA and Canada, as well as on next steps when moving forward into post-secondary golf.  This tournament marks a season of record participation in the program after a three-month shutdown due to health and safety concerns with the coronavirus outbreak. The 2021 MJT Early Bird Membership becomes available December 1; for more information please visit the website at www.maplejt.com.

About the adidas Group
The adidas Group is one of the global leaders within the sporting goods industry, offering a broad range of products around the core brands: adidas, Reebok and Reebok-CCM Hockey. Headquartered in Herzogenaurach, Germany, the Group has more than 53,000 employees.

About the MJT
The non-profit Maple Leaf Junior Golf Tour is Canada’s number one-played Junior Golf Tour as well as the only national junior tour run by PGA of Canada Professionals and the ‘Road to College Golf’ in Canada. The organization is supported by valued Premier, Tournament and Product Partners. The MJT hosted close to 80 events across Canada in 2020, including free Ford Go Golf Junior Clinics, the MJT Mini Tour for 7 to 12 year olds, and multi-day events for competitive players aged 11 to 19. The program offers annual awards, scholarships, and frequent player incentives to help reward player's performance and participation throughout each season. MJT alumni include many Professional Tour players and PGA of Canada Professionals, as well as Canadian Amateur, National and Provincial Junior Champions. The MJT aims to develop champions, in golf and in life, promoting the game from grassroots through to provincial, national, university and professional level. For more information, see www.maplejt.com.