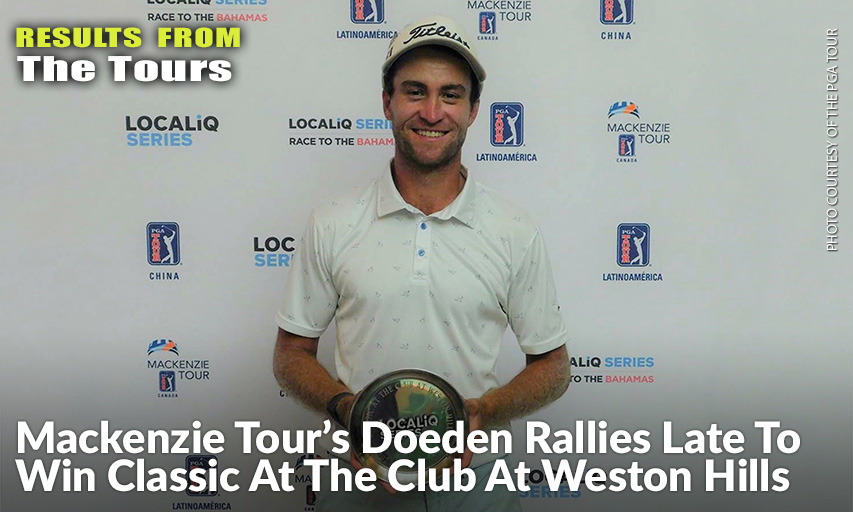 WESTON, Florida — Justin Doeden made a 35-foot birdie putt at No. 9 and that jump-started his final round at the Classic at The Club at Weston Hills. From there, the Minnesota native added four more birdies, including an exclamation-point six-footer on the final hole, to win the final full-field LOCALiQ Series tournament by two strokes over Norway’s Andreas Halvorsen.

Doeden earned 500 points and easily qualified for the season-ending LOCALiQ Series Championship next month in Georgia. With this week’s purse elevated from the traditional $100,000 to $125,000 courtesy of BMW of Pembroke Pines, he also walked away with a $20,000 first-place check.

“It’s still sinking in. I think of all the hard work I’ve been putting in, the hours of sleep I’ve lost. It’s everything. I’m kind of speechless,” said Doeden, who began the final round three shots behind playing partner A.J. Crouch.

As he walked from the 18th green, the victory secured, a crowd of Club at Weston Hills members cheered on Doeden, who finally smiled and yelled “Come on” to their approval. Moments later, Doeden was talking about that critical birdie putt that allowed him to make the turn to the back nine at 1-under. It was a difference-maker, he called it.

“Without a doubt that putt on hole No. 9. I had about a 20-footer over this ridge. That one creeped over the edge there and got me going,” Doeden said. “If that putt doesn’t go in on nine, who knows what happens? That was definitely the turning point.”

Doeden also called his six-foot bogey putt on the hole before a critical part of his round. After watching Crouch’s approach shot on the par-4 eighth come up short and fall back down the slope in front of the cup, Doeden went a club up for his shot, and his ball flew over the green long. “It’s not good back there long,” he added. He still was able to make his putt to avoid a complete disaster. “I kind of made a mess of eight, so go get one back on nine was huge. I make double (bogey) on eight and I’m probably out of it.”

Instead, the former University of Minnesota golfer made birdies at Nos. 11 (a chip-in from the front of the green), 13 and 16—that one giving him the lead for good. Unbeknownst to Doeden, he played 16 tied with Halvorsen, who was in the clubhouse at 13-under. Doeden rolled in a 10-foot birdie putt there, made a two-putt par on 17 and then closed with the birdie.

“Honestly, I thought I maybe had a one-shot lead, but I knew there was probably a [66 or 65] ahead of me,” Doeden said as he arrived at the 18th tee. “I knew I was ahead of the guys in my group, so I said, ‘Hey, I think I need a four to make sure this is done. That was my mindset walking down 18. Let’s make four.”

He hit his drive to the left side of the fairway and then laid up with his second shot, leaving him a little more than 100 yards over water to the green. Before hitting his third shot, he stopped and restarted his routine.

“That is where it sunk in. This is probably the biggest moment of your career. Those words didn’t come to mind, but that’s what hit me,” Doeden explained. “Sure, it was a 100-yard wedge shot. I’ve hit a million of those. But for some reason as I took the trigger back, something wouldn’t let me take it back. So, I backed off, took a deep breath, pulled the trigger and hit it to five feet.” It was a shot that essentially cemented the title.

Did you know Andreas Halvorsen was 131st in the points standings when the week began? He was hoping for a good finish this week, allowing him to qualify for the season-ending LOCALiQ Series Championship, and his runner-up performance did the trick. Halvorsen had previously made three starts, with two missed cut and a tie for 44th at the Jacksonville Championship. He improved from No. 131 to 16th with his second-place outing.

Through The Challenge at Harbor Hills

The Classic at The Club at Weston Hills was the third and final event of the Arcis Golf Florida Swing. With his win at the Jacksonville Championship, his tie for 10th at The Challenge at Harbor Hills and his tie for 40th this week, Carson Young won the Swing and the $7,500 bonus provided by Arcis Golf. Finishing second was this week’s Classic at The Club at Weston Hills champion Justin Doeden, who pocketed $2,500. “Apparently I like some Florida golf,” Young said after the check presentation. “I had a solid three weeks, obviously with the win starting off in Jacksonville helped a lot. I didn’t have my best stuff this week, but I got it done. It’s been a great three weeks.”

Arcis Golf, the premier operator of public, resort and private golf clubs in the United States, has a current portfolio of 60 properties located coast to coast in 13 states, including The Club at Weston Hills—the site of the final event of the Arcis Golf Florida Swing. Rounding out the top five in the standings were Toni Hakula, Cole Miller and Andreas Halvorsen.