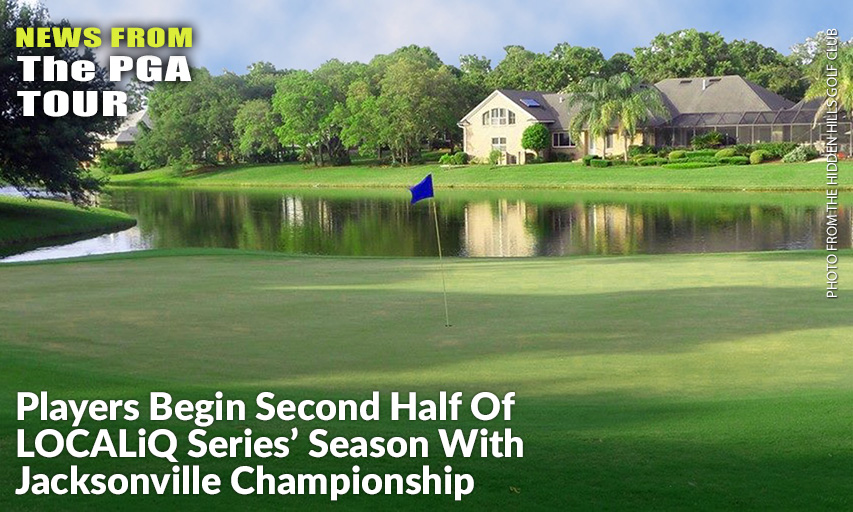 JACKSONVILLE, Florida — After an almost three-week break, LOCALiQ Series players resume action this week at the Jacksonville Championship, an event that officially kicks off the second half of the LOCALiQ Series season. The 54-hole event begins at Hidden Hills Country Club, a course that has waited 48 years for the return of PGA TOUR-affiliated golf.

The Jacksonville Championship also begins the three-event Arcis Golf Florida Swing that will reward the two top points-earners at the three Sunshine State tournaments (in Jacksonville, Lady Lake and Fort Lauderdale), with a $7,500 bonus to the winner. The second-place finisher will pocket $2,500.

The par-71 Hidden Hills layout opened in 1966. It has since gone through a renovation and is now an Arnold Palmer Signature Design. Beginning in 1970, the course hosted the PGA TOUR’s Greater Jacksonville Open for three years.

The tournament crowned two World Golf Hall of Famers as champions—Gary Player in 1971 and Tony Jacklin in 1972. The first champion at Hidden Hills was 10-time TOUR winner Don January, owner of the 1967 PGA Championship title.

The other 143 players in the field this week will continue to chase Race to The Bahamas Points Standings leader Bryson Nimmer, winner of two of the first four tournaments. He holds a 756-point lead over Hayden Shieh, who has two runner-up finishes this year. The Jacksonville Championship winner will receive 500 points this week. Stoney Crouch, winner of The Classic at Callaway Gardens, Cooper Musselman, The Invitational Auburn University Club champion, and Alex Smalley round out the top-five points-earners.

A couple of players in interesting positions are Jacksonville native Travis Trace, who grew up here and played collegiately at nearby University of North Florida, and China’s Andy Zhang. Trace is 24th on the Race to The Bahamas Points Standings, while Zhang, a native of Beijing who has lived in Orlando since his teenage years and played collegiately at the University of Florida, is coming off a made cut at the PGA TOUR’s Safeway Open in Napa, California, two weeks ago. Both are looking to pick up momentum and move their way up the standings.

“It’s been a fantastic playing opportunity. The competition has been at a really high level. The players out here are really, really good,” Zhang said of his LOCALiQ Series experience. “I think because I had a chance to play a few tournaments before I played in Safeway, it set me up very well and put me in a good spot to Monday-qualify into Napa. I think that was definitely an advantage of playing this vs. not playing anything at all.” Zhang is currently 63rd on the points list.

Trace finished his practice round and walked off the 18th hole like he knew where he was going, which he did. He figures that he played golf at Hidden Hills every day from the time he was in seventh grade until he graduated from nearby Sandalwood High School. It’s definitely a home game for him this week.

“I know the course really well and have played it so many times. Sometimes you get on a course you’ve never played before and some of the (sight) lines aren’t as comfortable. Nothing out here is surprising or confusing with what I have to do,” he said. Trace is coming off a 14th-place finish on the 2019 Mackenzie Tour Order of Merit. He had three top-10s a year ago, including a runner-up performance at the Lethbridge Open, losing to Alex Chiarella by a shot.

“I was looking forward to going back up to Canada. I had a solid season last year and was looking to build on that and hoping to get to the Korn Ferry (Tour) through the Mackenzie Tour,” said Trace, who turned pro prior to graduating but finished his UNF degree this past May.

“It’s a little unfortunate,” Trace added about the canceled Mackenzie Tour season. “Everything is just delayed by a year, and I’m trying to stay positive and sharp.”

In his last start, at The Invitational at Auburn University Club, Trace strung rounds of 67-68-67 together to tie for sixth in Alabama.

RACE TO THE BAHAMAS POINTS STANDINGS

Through The Invitational at Auburn University Club