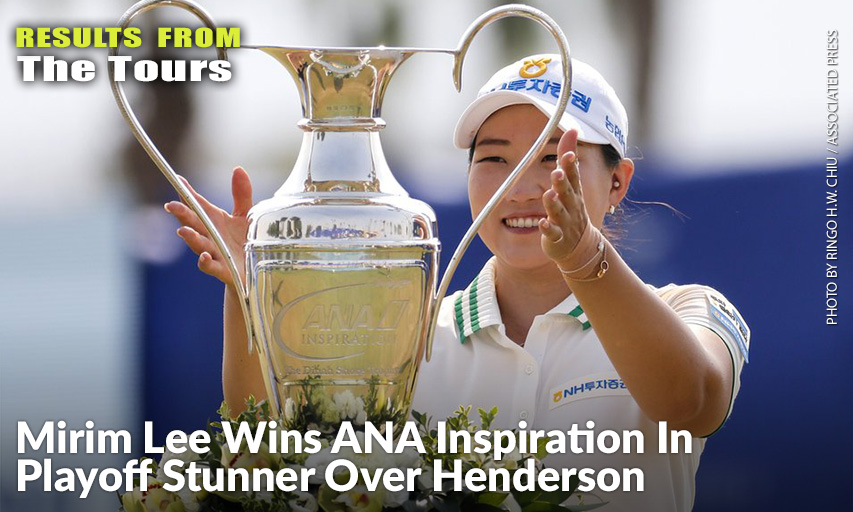 RANCHO MIRAGE, California — Mirim Lee ran toward the water for the winner’s leap into Poppie’s Pond, and there was no blue wall to stop her.

How she even got to that point as the ANA Inspiration champion was shocking even to Lee.

She chipped in twice to stay in the hunt for a major title that for the longest time looked as though it would come down to Nelly Korda or Brooke Henderson. And then after a 5-wood that caromed off a temporary blue wall behind the 18th green and kept it from going in the water, Lee chipped for eagle and a 5-under 67.

That got her into a three-way playoff, and Lee ended it quickly.

She hit 5-wood just through the green — no help needed from the wall on that one — chipped to 5 feet and made the birdie putt. Korda missed the 18th fairway for the second time and made par, while Henderson’s 7-foot birdie putt in the playoff stayed left of the hole.

“I must be a little crazy for winning,” Lee said through a translator.

Asked on television off the 18th green if she was in disbelief, Lee was too busy wiping away tears to answer, so the translator finally offered, “Yes.”

Korda, the 22-year-old American going for her first major, had a two-shot lead with four holes to play and didn’t have a good look at birdie the rest of the day and shot 69. Henderson, at 23 already with more LPGA victories (9) than any Canadian, also used the wall as a backstop to set up a birdie on the 18th to rally from a double bogey and join the playoff.

Lee never looked like a winner until she calmly poured in the birdie putt in the playoff, the first major championship for the 29-year-old South Korean ranked No. 94 in the world.

It was another wild finish in the LPGA major that moved from the first weekend of April to the 100-degree heat of September, and no one was more surprised than Lee.

“I think I had a bit of luck that helped me,” she said.

Lee chipped in for birdie on No. 6. Her biggest shot came on the 16th, a pitch-and-run from 90 feet to a back pin that dropped for an unlikely birdie. The only time she lost hope was after her bogey on the par-3 17th, leaving her two shots behind with one hole to play.

“My plan for 18 was just to have a birdie and do what I have to do to keep my head up,” she said. “And when the shot went in, I think I was really surprised.”

The wall became a big part of the story.

The tournament erected it in place of a hospitality chalet that was not needed this year because there were no spectators or clients allowed as a precaution during the COVID-19 pandemic.

The chalet in normal years has served as a buffer for shots struck too hard, but it served no purpose except for some signage that didn’t really stand out. It kept the 18th green from being the island it is, and it played a huge role for Lee and for Henderson in the final hour.

“The fact is, it has been way too artificial,” Hall of Famer Judy Rankin said on the Golf Channel broadcast. “There was no real reason for it to be there. There were not spectators, or clients or anything like that. And it has affected play way too much.”

Lee practiced that shot earlier in the week. “I definitely thought to utilize the back board,” she said of her shot. 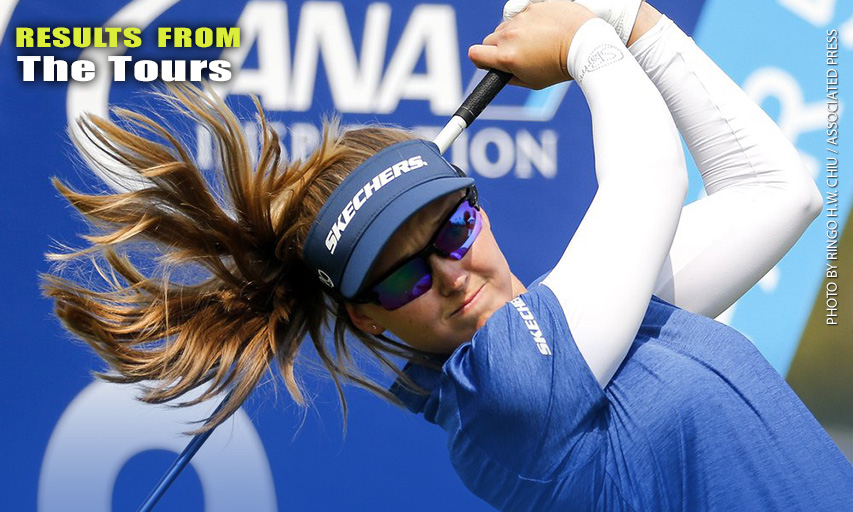 Brooke M. Henderson Watches Her Tee Shot On The Ninth Hole During The Final Round Of The LPGA's ANA Inspiration.

Henderson was one shot behind on the 18th, her ball sitting up in the rough, when she hit 5-wood that came out flat and was running hot until it disappeared under the blue bunting. She was given a free drop from the temporary immovable obstruction, chipped to 2 feet for birdie and a 69 and joined the playoff at 15-under 273.

The wall didn’t decide the playoff, though.

Lee hit a beautiful fairway metal that led to her up-and-down for birdie. Korda couldn’t get close enough with a wedge after having to lay up. Henderson came up just short, and her eagle putt from just off the front of the green ran out an extra 7 feet on the sun-baked, fast greens of Mission Hills.

“You’re playing against the best in the world out there, and it’s tough to lose that way,” Henderson said. “I felt like I missed a lot of putts. ... But Mirim and Nelly played great, and I really fought my way around, so I’m happy.

Henderson lost the lead with a double bogey on the 13th hole that nearly cost her. But she birdied the 16th and 18th to at least give herself a chance. Korda had a two-shot lead with four to play, but it was her tee shots on the 18th, both into deep rough, that kept her from a reasonable chance at birdie in regulation for the win and in the playoff.

“That’s what got me in trouble there,” Korda said.

Even with world No. 1 Jin Young Ko and U.S. Women’s Open champion Jeongeun Lee6 staying home because of travel concerns with the coronavirus, Lee made it 10 consecutive years with a South Korea winning a major.

It was her fourth LPGA Tour victory, and first since the Kia Classic three years ago.

U.S. Women’s Amateur champion Rose Zhang birdied the 18th for a 72 to tie for 11th. She finished at 8-under 280, setting the tournament record for lowest score by an amateur.