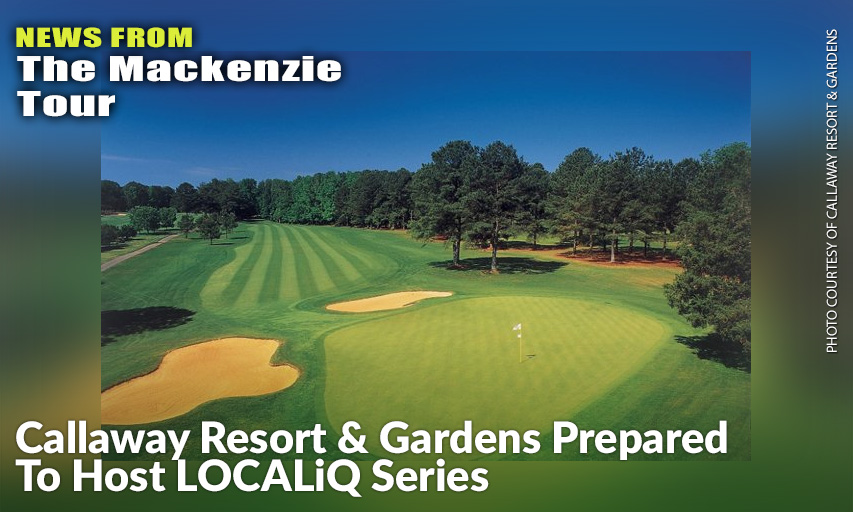 PINE MOUNTAIN, Georgia — It’s been 18 years since Callaway Resort & Gardens has seen PGA TOUR-affiliated golf on its fairways and greens. The last time was in 2002 when Jonathan Byrd defeated David Toms by a stroke and Phil Mickelson by three shots to win the Buick Challenge.

Beginning Wednesday, another former Clemson golfer will look to make good on Callaway’s fairways and greens. Bryson Nimmer, who, like Byrd, wore the orange and purple of Clemson, will try to keep his hot streak alive as he goes for three LOCALiQ Series tournament wins in a row at this week’s 54-hole Classic at Callaway Gardens.

Nimmer has had plenty of success already in the Peach State, capturing the Series’ first two events, the Alpharetta Classic and The Championship at Echelon Golf Club, both tournaments in the Atlanta suburb of Alpharetta. The final Georgia event of the eight-tournament Series is at Callaway Resort & Gardens’ Mountain View Course, a venue that hosted the PGA TOUR for 12 iterations of a tournament known as the Southern Open, the Buick Southern Open and finally the Buick Challenge. Past champions of the “Southern” include Presidents Cup stalwarts Steve Elkington, a two-time winner, in 1994 and 1998, Fred Funk (1995), Davis Love III (1997), Toms (1999), David Duval (2000) and Chris DiMarco (2001).

As the LOCALiQ Series’ most-dominant player, Nimmer sits atop The Race to The Bahamas Points Standings, and he could put a complete stranglehold on the points list with another victory. Nimmer will, however, face plenty of competition among the other 143 players in the field.

Thirty-three golfers who didn’t play in either of the first two LOCALiQ Series tournaments are in action this week, making their Series debuts. Included in the group is Alvaro Ortiz, who closed his stellar amateur career with a T36 finish at the 2019 Masters Tournament. Last March, making his first PGA TOUR Latinoamérica start as a member, the 24-year old claimed runner-up honors at the season-opening Estrella del Mar Open in Mazatlan, Mexico. Ortiz is the younger brother of PGA TOUR player Carlos.

“I am very excited to start competing in the LOCALiQ Series. I have heard very good comments after the first two tournaments, and it is always good to feel that adrenaline that tournaments give you,” Ortiz said. “Let's see what happens this week at Callaway Gardens.

“I’ve been living in Dallas with my brother and his family,” Ortiz continued. “At first I felt a bit sad about the postponement of PGA TOUR Latinoamérica and the cancellation of the other International Tours because like many friends I already had a season planned. COVID-19 caught us all by surprise, and we have had to adapt to the situation.”

Other first-timers to watch this week are Trevor Sluman, who finished second on the 2019 PGA TOUR Series-China Order of Merit, and past PGA TOUR Latinoamérica winners José Toledo of Guatemala and Argentina’s Puma Domínguez.

Garnering the most attention, however, is Nimmer. The former first-team All-American is a combined 38-under in his six LOCALiQ Series rounds and has come from behind on the final day in both of his victories. He holds a 700-point advantage over Hayden Shieh on The Race to The Bahamas Points Standings. Five-hundred points are again available to this week’s winner.

About LOCALiQ Series
The PGA TOUR established the LOCALiQ Series in 2020 to give playing opportunities to members of PGA TOUR Latinoamérica, the Mackenzie Tour – PGA TOUR Canada and PGA TOUR Series-China. The LOCALiQ Series is a set of seven 54-hole events played in the Southeastern U.S. (Georgia, Alabama and Florida), with the culminating tournament held at Atlantis Paradise Island Resort’s Ocean Club Golf Course in the Bahamas. LOCALiQ, the sales and marketing arm of Gannett Co., Inc., and the Official Digital Marketing Services Firm of the PGA TOUR, is committed to the communities in its network and helping them build relationships with their local businesses.