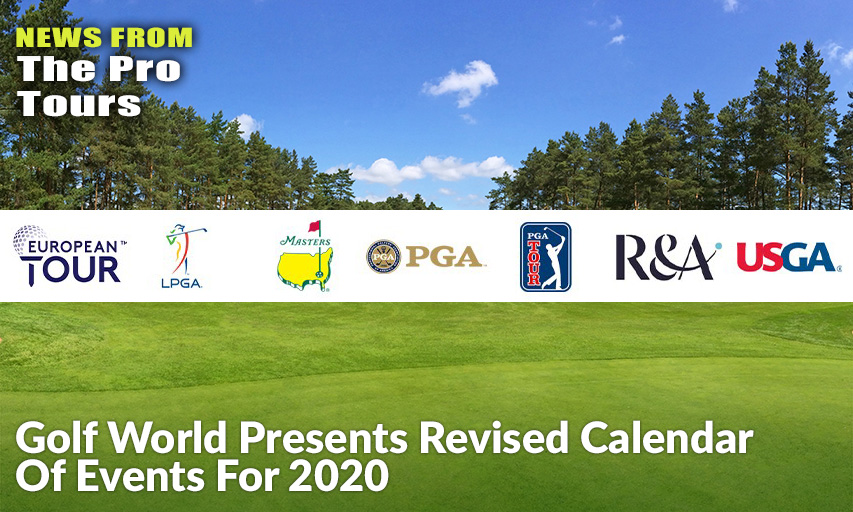 United by what may still be possible this year for the world of professional golf, and with a goal to serve all who love and play the game, Augusta National Golf Club, European Tour, LPGA, PGA of America, PGA TOUR, The R&A and USGA have issued the following joint statement:

“This is a difficult and challenging time for everyone coping with the effects of this pandemic. We remain very mindful of the obstacles ahead, and each organization will continue to follow the guidance of the leading public health authorities, conducting competitions only if it is safe and responsible to do so.

“In recent weeks, the global golf community has come together to collectively put forward a calendar of events that will, we hope, serve to entertain and inspire golf fans around the world.  We are grateful to our respective partners, sponsors and players, who have allowed us to make decisions – some of them, very tough decisions – in order to move the game and the industry forward.

“We want to reiterate that Augusta National Golf Club, European Tour, LPGA, PGA of America, PGA TOUR, The R&A and USGA collectively value the health and well-being of everyone, within the game of golf and beyond, above all else. We encourage everyone to follow all responsible precautions and make effort to remain healthy and safe.”

Updates from each organization follow, and more information can be found by clicking on the links included:

The U.S. Open, previously scheduled for June 15-21 at Winged Foot Golf Club in Mamaroneck, New York, has been officially rescheduled for September 14-20 and is confirmed to remain at Winged Foot. For more information and comments from USGA CEO Mike Davis, click here.

The R&A has decided to cancel The Open in 2020 due to the current Covid-19 pandemic, and the Championship will next be played at Royal St. George’s in 2021. The Open was due to be played in Kent, England, from July 12-19, but it has been necessary to cancel the Championship based on guidance from the UK Government, the health authorities, public services and The R&A’s advisers. For more information and comments from The R&A Chief Executive Martin Slumbers, click here.

The PGA of America is announcing that the PGA Championship is now scheduled to take place August 3-9 and will remain at TPC Harding Park in San Francisco, California.  The PGA Championship was originally slated for May 11-17 but was postponed on March 17.

Augusta National has identified November 9-15 as the intended dates to host the 2020 Masters Tournament, which was previously scheduled for April 6-12 and postponed on March 13. For more information, and comments from Chairman Fred Ridley, click here.

While collaborating with the PGA of America to find a viable date for the PGA Championship in August, the PGA TOUR worked with its host organizations and title sponsors to move the Regular Season finale – the Wyndham Championship – and all three FedExCup Playoffs events one week later, starting the week of August 10 and concluding with a Monday, September 7, Labor Day finish for the TOUR Championship.

The TOUR will seek to reschedule tournaments into the weeks formerly occupied by the U.S. Open, The Open Championship and the Men’s Olympic golf competition in June and July.  The TOUR will make further announcements about this potential, as well as its fall schedule, in the coming weeks.  For more information and comments from PGA TOUR Commissioner Jay Monahan, click here.

Due to the many complexities involved, the European Tour is currently working through various scenarios in relation to the rescheduling of our tournaments for the 2020 season. The European Tour will make further announcements on these in due course.

On April 3, the LPGA released a revised look at the LPGA Tour’s 2020 summer schedule, beginning on the week of June 15 with the Walmart NW Arkansas Championship presented by P&G. In addition, the LPGA Tour announced that they have successfully rescheduled their first two majors of the year (the ANA Inspiration moves to the week of September 7 at Mission Hills Country Club in Rancho Mirage, California; and the U.S. Women’s Open conducted by the USGA moves to the week of December 7 at Champions Golf Club in Houston, Texas). For more information, click here.

A listing of the revised schedule of events announced follows:

“We appreciate the open and collaborative approach taken by each of our tournaments, title sponsors and media partners to get us to this solution,” said PGA TOUR Commissioner Jay Monahan. “It’s a complex situation, and we want to balance the commitments to our various partners with playing opportunities for our members – while providing compelling competition to our fans – but all of that must be done while navigating the unprecedented global crisis that is impacting every single one of us.  Events of this size are not easy to move, and we are grateful to our host organizations and title sponsors, who are making significant efforts in allowing us an opportunity to look forward to a return to PGA TOUR golf.”

If you, like me, were confused by yesterday’s announcement into thinking that the next possible Tour event was going to happen in mid-June, you’re not alone. Darren Rovell thought the same thing.

That’s right, the Charles Schwab Challenge is still a go for late May! There are, in fact, four events still on the PGA Tour schedule before “Potential PGA Tour Tournament” enters the fray. Speaking of which:

2. What’s the first mystery PGA Tour event that will fill in the schedule?

Couched under “TO BE CONFIRMED,” The Tour’s release mentioned an event to take place June 15-21 — formerly U.S. Open week. Rumors have swirled about a potential Memorial Tournament to be held that week, perhaps without fans. But that’s contingent on a postponement — at the moment, the Memorial is still scheduled for the first week of June. So what other tournament could fit there? When the first tournament actually happens, we’ll know a lot more, and everything else will follow from there.

3. What does that mean for the Tiger-Phil-Tom-Peyton Mega-Match?

Initially, the plan was for misters Woods, Mickelson, Brady and Manning to play a match in Florida about a month before the PGA Tour was going to come back. Does that mean we’re looking at golf in a few weeks? Does Brady’s new Seminole membership give us any clues? Will this date shift with more potential Tour cancelations? Does Brady know Tampa is on Florida’s west coast, and Seminole isn’t? (I warned you there would be more questions than answers…)