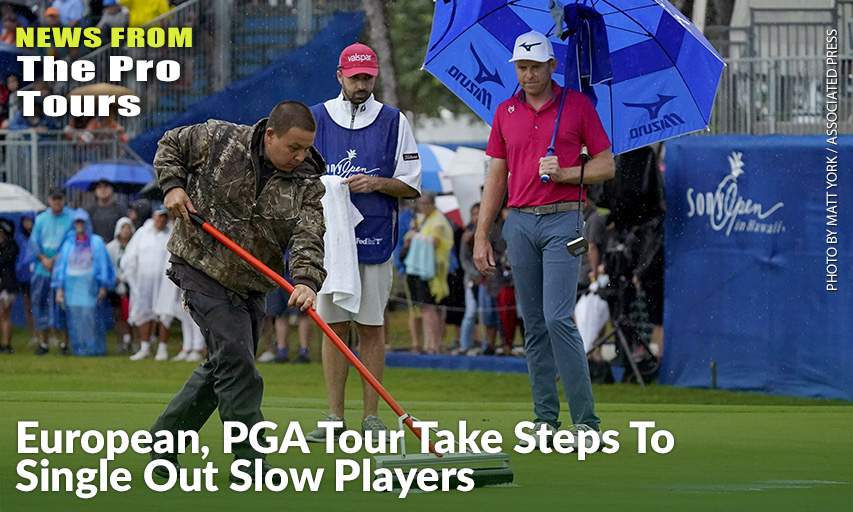 The European Tour and PGA Tour are trying to crack down on slow play with revamped policies that allow for swifter penalty shots and for officials to target players who are taking too long to play.

The policies, while slightly different, are similar in that the objective is to encourage players to change their habits.

The European Tour policy starts at the Abu Dhabi HSBC Championship. The PGA Tour is introducing its policy, which was approved in November, at The American Express. It does not begin until after the Masters.

Previously, the PGA Tour did not time a player unless his group was out of position or lagging behind a scheduled time for them to play, known as time par. That stays in effect.

Additionally, any player taking 120 seconds for a shot, without a valid reason, will be given an “excessive shot time.”

The tour also will have a weekly “observation list” to identify the slow players. They can be timed even if their group is in position on the golf course.

Players are put on the list if ShotLink data shows they take an average of 45 seconds or more to play a shot based on their previous 10 tournaments. A player who receives two excessive shot times in one tournament also will be placed on the list, which is updated weekly.

If an official sees a player on the list take 60 seconds or longer to play, he will be notified he is being timed. The timing only stops if the player goes two holes without a bad time.

The amount of time allowed to play hasn’t changed — players have 40 seconds to hit a shot when it’s their turn, with an additional 10 seconds for the player who is first to hit a various shot.

The penalties, however are swift.

Previously, if a group was out of position, a player received a warning if he had a bad time, and the second bad time in the same round resulted in a one-shot penalty. The last such penalty on the PGA Tour was assessed to Miguel Angel Carballo and Brian Campbell, partners in the 2013 Zurich Classic team event. Before that it was Glen Day in 1985.

Starting in April, players who are out of position or on the observation list will get a warning for the first bad time, and a one-shot penalty if it happens again during the tournament.

On the European Tour, players also will get a one-shot penalty after a second bad time in a tournament, instead of a round.

A player can call a “time extension” for any stroke once a round, adding 40 seconds to the time allowed. Players must call for this extension before they go over the allotted time.

Even when a group is in position, those players previously were allowed 100 seconds if they were first to hit, and 80 seconds for the rest of the group. That time was reduced 15% under the new policy, allowing players 85 seconds and 70 seconds, respectively. If a player exceeds the limit while the group is in position, he would get a “monitoring penalty.” That typically involves a fine instead of a penalty because the group is not holding up anyone.

“Changing the regulation for an immediate one-shot penalty to now be triggered by two bad times in a tournament instead of a round will force slower players to consistently ensure they play within timing regulations,” said John Paramor, the chief referee for the European Tour.

Europe introduced a four-point plan in August that also involves field size. The field at fully sanctioned events will be reduced from 156 to 144 players, provided that everyone who finished among the top 132 in the Race to Dubai are eligible for the tournament.

PGA Tour officials had long believed that too many players in the field effectively clogs up the golf course, similar to a traffic jam on a highway, and causes too much waiting.