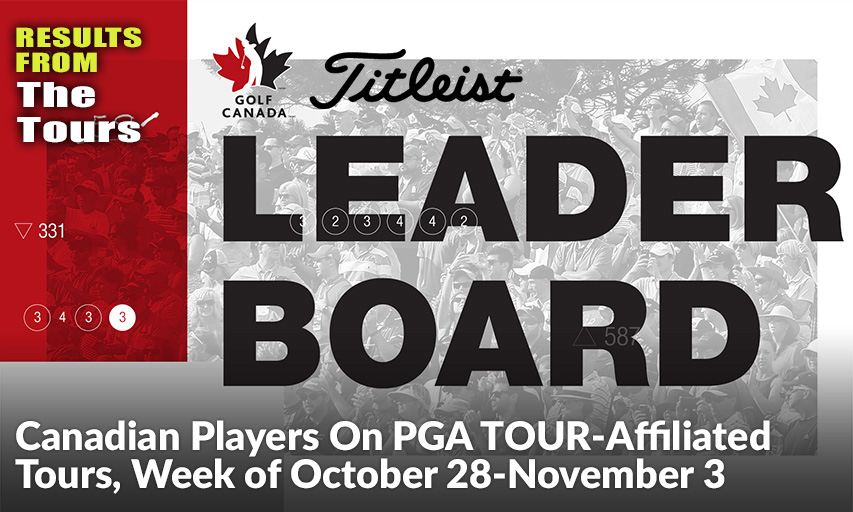 Brendon Todd flirted with 59 before settling for a final round 62 and the win at the Bermuda Championship for his second career PGA Tour title. He won for the first time in 2014 and then went 100 starts before breaking through again, two months after regaining his tour card in the Korn Ferry Tour Finals. …David Hearn posted his first top 10 result since April. That was also the last time he carded all four rounds in the 60s. …Roger Sloan made the cut for only the second time in five starts in 2020. …Michael Gligic has made the cut in each of his last three tournaments after starting the 2020 season by missing the first two cuts. …Mike Weir has missed the cut in eight of his last 10 PGA Tour starts. …Graham DeLaet was making his third of 24 starts under a major medical exemption, having missed the cut in two of those three starts.

Rory McIlroy played bogey-free over the last 39 holes and closed with a 68 but needed a two-putt birdie on the first playoff hole to defeat Xander Schauffele and win the HSBC Champions. It was his third World Golf Championships title – his first since 2015 – and his fourth win of the year. …Corey Conners posted his best result in a World Golf Championship event. …Adam Hadwin was just four strokes off the low round of the day in the final round

Nelly Korda successfully defended her title in the LPGA Swinging Skirts, birdieing the first hole of a playoff with Australia’s Minjee Lee and Germany Caroline Masson. It was Korda’s third LPGA Tour victory. …Brooke Henderson finished in a three-way tie for fourth, four shots behind the winner. …Alena Sharp’s third round 78 was the first time in 12 rounds that she has failed to record a round of even par or better on this Asian swing

Muni He finished every round of the eight-round LPGA Q-Series tournament under par en route to medalist honors and earn her card for 2020. …Maddie Szeryk failed to secure LPGA Tour membership in 2020 after finishing outside the top 45 and ties.

Colin Montgomerie won the Invesco QQQ Championship with a par on the first hole of a playoff to take the second of three events in the PGA Tour Champions’ Charles Schwab Cup playoffs. Bernhard Langer, who missed a 15-foot birdie try on the final hole in regulation, took four strokes to get out of a greenside bunker on the first playoff hole. The top 36 in the season standings advanced to the season-ending Charles Schwab Cup Championship next week in Phoenix. …Stephen Ames finished above par for the first time in the last seven tournaments. At 29 in the playoff standings, he will advance to the finale.

Argentinian Alejandro Tosti shot a final round 64 for a one-stroke victory over Spain’s Mario Beltran and American Justin Suh to win the Termas de Rio Hondo Invitational. …Blair Hamilton notched his best result since a runner-up finish in June 2018 and his final round 62 was a career low. …Jared du Toit made the cut for the first time in three events this year. …Wil Bateman has made the cut in three of his last four events.