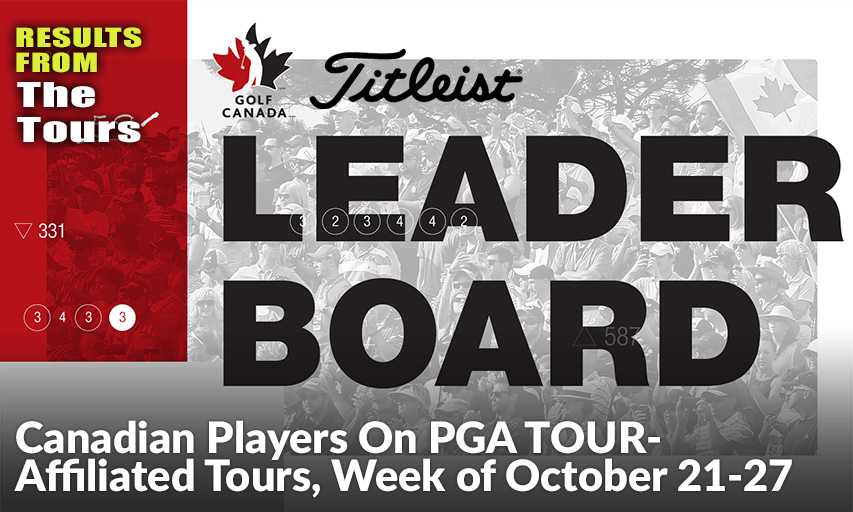 Tiger Woods completed a wire-to-wire victory to win the Zozo Championship, tying Sam Snead’s PGA Tour record of 82 victories. Woods was making his first start of the season after having arthroscopic surgery on his left knee two months ago – the fifth such procedure on the same knee. Local favourite Hideki Matsuyama finished three strokes back. ..Corey Conners notched his first top 10 result of the 2020 season. …Adam Hadwin has played 10 of his first 12 rounds of the new season in even par or better.

England’s Steven Brown carded a final round 66 to win the Portugal Masters for his first European Tour title. Brown made par or better on each of his last 36 holes to finish one stroke better than South Africans Justin Walters and Brandon Stone. No Canadians were entered in the event.

Ha Na Jang birdied the third playoff hole to beat Danielle Kang at the LPGA’s BMW Ladies Championship. Jang is the second non-LPGA member winner of the 2019 season, joining Women’s British Open champion Hinako Shibuno. She is eligible for immediate LPGA Tour membership, or she can defer it to the 2020 season. Kang was looking for second consecutive win on the Asian swing after winning last week’s Shanghai tournament. …Alena Sharp has played even par or better in 10 of her last 12 rounds. …Through the first two events of the Asian swing, Brooke Henderson is a total of -14 par through the first two rounds but is two over par in the final two rounds.

Muni He is the outright leader at 9-under par halfway through the LPGA Q-Series. …After struggling to 6-over par in the first two days, Maddie Szeryk carded back-to-back 68s to put herself back in contention for a tour card.  …The final four rounds of the Q-Series will take place Oct. 30-Nov. 2 with the top-45 finishers and ties receiving LPGA Tour membership in 2020.