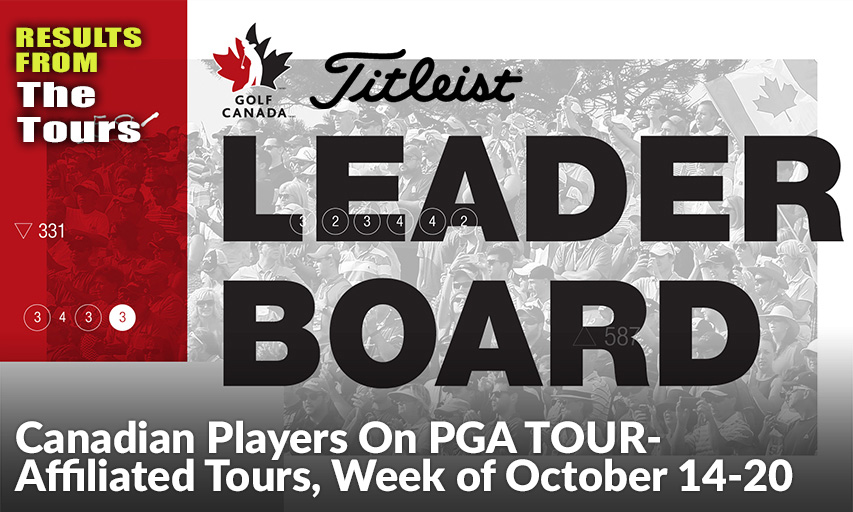 Justin Thomas carded a final round 67 to win the CJ Cup at Nine Bridges for the second time in two years. Thomas won for the 11th time on the PGA Tour and the second time in his last four starts to move up to No. 4 in the world ranking. World No. 1 and defending champion Brooks Koepka withdrew after the second round with a knee injury. …Corey Conners made four birdies and an eagle for a 6-under-30 over his final nine holes for his best result in three starts of the 2020 season.

Nicolas Colsaerts of Belgium ended more than seven years without a victory, shooting a 1-over 72 and surviving a wild back nine to win the French Open. Colsaerts had to chip in for eagle on the par-5 14th to regain the lead before giving it right back with a double bogey on the next hole. Joachim Hansen then made double bogey on the 17th hole that allowed Colsaerts to take the lead again. Colsaerts closed with three pars for a one-shot victory. There were no Canadians entered in the event.

The final round of the Dominion Energy Charity Classic was postponed until Monday after more than 2 inches of rain Saturday night and a forecast for more on Sunday. Miguel Angel Jiménez carded a final round 63 to capture the first of three Charles Schwab Cup Playoffs events. …Stephen Ames tied for 14th at -8.

Danielle Kang played bogey-free and closed with a 2-under 70 to win the Buick LPGA Shanghai for the second consecutive year with a tournament record 16-under 272. Kang began the day one stroke behind Jessica Korda, who finished one shot back. …Brooke Henderson scored a hole-in-one on the par-3 second en route to a second round 64. It was the second hole-in-one of the year for her and the seventh of her career. …Alena Sharp has three top-20 results in her last four tournaments

Olivia Cowan and amateur Sierra Brooks claimed co-medalist honours at Stage II of the LPGA Qualifying Tournament. …Former LPGA player Rebecca Lee-Bentham and Samantha Richdale both missed qualifying for the final stage of the LPGA Q-Series by one stroke. Brittany Marchand was two strokes outside the qualifying mark.

Leandro Marelli closed with a 67 for a one-shot victory over John Somers at the Peru Open. …Russell Budd and Sebastian Szirmak tied for low round of the day with their third round 64s. Budd’s 64 is a career-low and he equalled his best result of the year on tour. It was the second time in the last 13 rounds Szirmak has shot 64. …Blair Hamilton made the cut for only the second time in five starts this year. …Since winning the Mexican Open in May with a score of 17-under par, Drew Nesbitt has played a combined -18 under par in his last four tournaments.