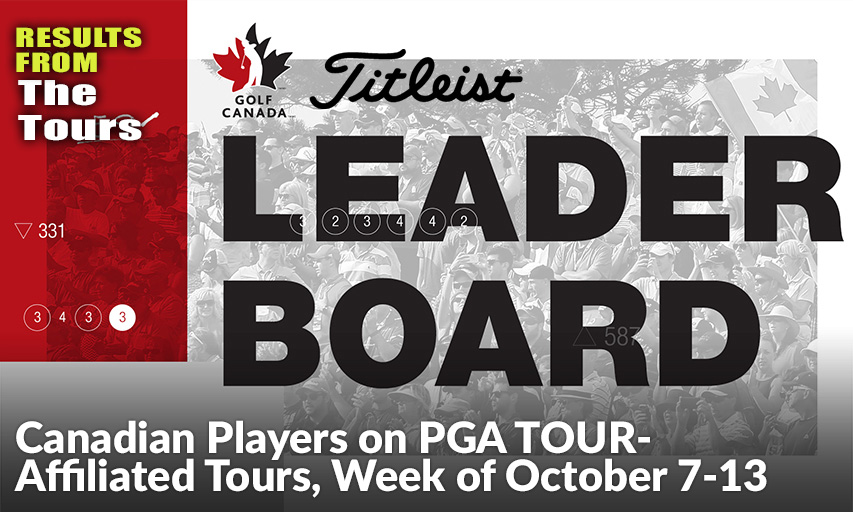 Lanto Griffin took the lead with a 35-foot birdie putt on the 16th hole and needed a 6-foot par putt to avoid a playoff for a one stroke win at the Houston Open. Mark Hubbard and Scott Harrington were battling Griffin for the lead throughout the back nine but Hubbard lost his chance at the title with a bogey on No. 16 while Harrington three-putted No. 17. …Michael Gligic is a combined 9-under par after making back-to-back cuts. Graham DeLaet, playing on a major medical exemption, made his first cut since October 2017. …David Hearn missed just his first cut in four starts in the 2020 season.

Justin Shin went wire-to-wire to win the season-ending Macau Championship by five strokes. The Maple Ridge, B.C. player became the 14th multiple-tournament winner in Series history and joins Richard Jung as the only other Canadian to have won on the tour this year. Coming into the tournament Shin was in danger of losing his tour card but the win vaulted him up to No. 11 on the Order of Merit, giving him full exemption for 2020. Jung finished third, six shots back. Two other Canadians finished in the top 15. …Richard Jung finished sixth on the Order of Merit which gives him direct entry to the final stage of the Korn Ferry Tour Qualifying Tournament in December.

Bernd Wiesberger carded a bogey-free round of 65 to win the Italian Open by one stroke over Matthew Fitzpatrick. It was his third European Tour win of the season and moved Wiesberger to the top of the Race to Dubai rankings. There were no Canadians entered in the event.

Jerry Kelly reeled off five straight birdies to close out the front nine and held on to win the SAS Championship by one shot over David McKenzie. It was the third win of the year for Kelly. It was the final regular-season event on the PGA Tour Champions. …Stephen Ames picked up his third top 10 result of the season – fourth if you include the U.S. Senior Open Championship – and finished 31st on the Charles Schwab Cup Money List to advance to the playoffs.