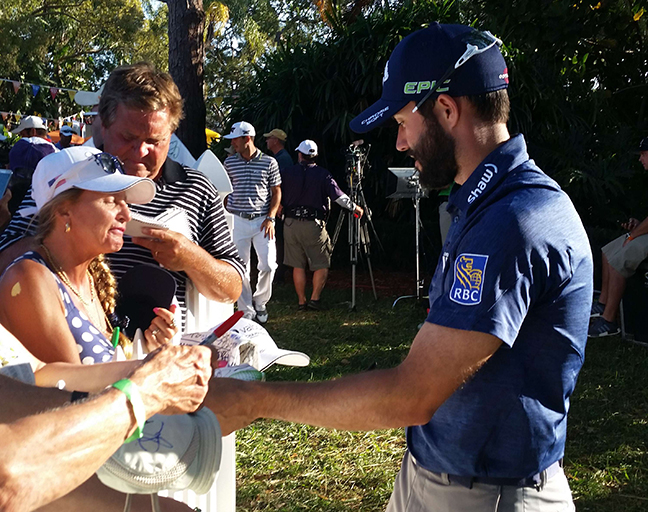 For the third time this season Adam Hadwin shot 29 for nine holes. His second round back-nine 29 went with a 35 on the outward 9. The 6-under 29 coming home vaulted him to the top of the leaderboard here at the Valspar Championship where he is walking the fairways looking very composed, his rhythm and tempo extraordinary. He's a very relaxed and calm young man.

During the practice rounds this week Adam related that he feels comfortable on the tour whereas a few years ago he wasn't sure how exactly he fit in out here. He's quickly gained the reputation as a fellow that can get it going and get it going low.

He's a self-professed 'late-bloomer' who said he really didn't win everything growing up and it wasn't until his final year playing at the University of Louisville in Kentucky that he was to win his first collegiate event.

It's a great time currently for Adam, he's to be married at the end of this month and he looks like he's in a great place. It will be enjoyable watching him over the final 36 holes as he's off in the group in round three with the first-round leader Jim Herman who shot a 62 in round one. Adam has a one shot lead on Herman but there's a whole bunch of guys within 10 shots. 72 to be exact.

Canada can take pride in the fact that 100% of the Canadians playing this week made the cut. The Maple Leaf went 4 for 4 as, along with Hadwin, fellow Ledgeview club-mate Nick Taylor, Saskatchewan's Graham DeLaet and Ontario's David Hearn all made the even-par cutline right on the number.

No other country with multiple players can boast that. Who knows, with all players within 10 strokes of the lead it could be anybody's weekend.