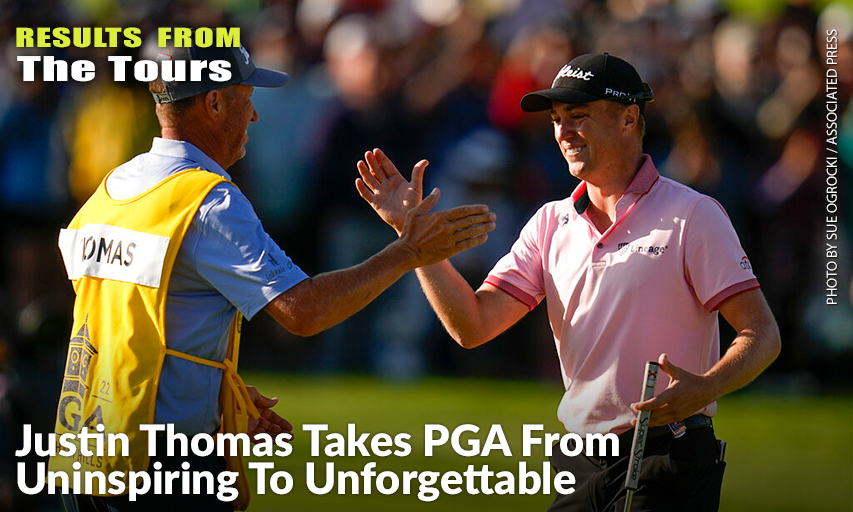 TULSA, Oklahoma — Justin Thomas wrapped his arms around the 27-pound Wanamaker Trophy after winning his second PGA Championship, and thousands of fans ringing the 18th green amid the setting sun at Southern Hills showered him in adulation.

Good thing they woke up in time for his final-round charge.

For nearly four full days, the year’s second major had been a major snooze, the cast atop the leaderboard a list mostly made up of also-rans searching for a moment stardom. The golf itself was unspectacular, too, as everyone from Abraham Ancer to Tiger Woods ground their way around a Perry Maxwell classic that was both forbidding and unforgiving.

Heck, even the eventual champ shanked one off the tee in the final round.

“Just cold shanked it,” Thomas said. “Don’t really know how else to say it. It was the best bogey I’ve ever made in my life.”

Cameron Young tried to move up the leaderboard during the final round, then left his chances of victory in a fairway bunker on the 16th hole. Will Zalatoris hung on for life as iron shots found creeks and shrubs and very little short grass. Chile’s Mito Pereira had a career-changing moment staring him in the face until a fateful shot on the 18th hole.

That’s about the time the PGA Championship went from uninspiring to unbelievable.

Pereira’s shot into the creek off the tee on the 490-yard finishing hole led to a double bogey, not only robbing him of the most unexpected of major championships — and the $2.7 million winner’s purse, lifetime spot in the tournament, and all the other baubles — but keeping him out of the three-hole aggregate playoff to decide the thing.

Thomas had rattled off a couple of birdies on the back side before an up-and-down for birdie at the 17th, moving him to 5-under and within a shot of the lead. And he hit a brilliant shot to within 15 feet at the 18th to set up another birdie, only to watch the putt that, at the moment, he thought he needed for a playoff go skating past the hole.

The crowd around the green, now fully invested in the goings-on, let out a collective groan.

“The leaders could have shot 3- or 4-under today, and like, I could have grinded and made a couple more birdies and look at the leaderboard on 18 and I’m four or five back,” Thomas said later. “I just was trying to birdie every hole I could.”

Coming up behind him, Zalatoris had finally wrangled his renegade irons in time to make birdie at the 17th, getting him back to 5-under. He never gave himself a chance for birdie at 18, instead making a nervy 8-footer to stay there.

“I always felt like I was one, two, three back,” Zalatoris said, “and then once I saw Mito hit into the water on 18, I know that putt that I was going to have on 18 was probably to get into a playoff. So I will bottle that putt on 18 for the future.”

Thomas and Zalatoris watched Pereira come undone and then headed back out for the playoff.

After the two matched birdies at the 13th hole, Thomas showed the kind of calm that comes with having been in such a situation before, ripping his tee shot onto the green at the 308-yard 17th. He made a two-putt birdie while Zalatoris could only manage par, sending the 2017 PGA champ to the 18th again — this time with a one-shot lead of his own.

With the once-slumbering crowd still jostling for position, Thomas and Zalatoris found the green with their approach shots, and the only drama left was whether the son of a longtime club professional could get down in two for the win.

He did. And what had been a dreary championship had its dramatic ending.

Thomas matched the biggest comeback in PGA Championship history, set by John Mahaffey in 1978 at Oakmont, where he also rallied from seven down before winning in a playoff over Tom Watson and Jerry Pate. And his final-round 67 matched the lowest round of the day, ultimately helping him end a 14-month winless stretch

It also gave Southern Hills another notable major champion — of the seven previous, six are in the Hall of Fame.

“It’s funny,” Thomas said. “I was asked earlier in the week what lead is safe, and I said, ‘No lead.’ This place is so tough. But if you hit the fairways, you can make birdies, and I stayed so patient. I just couldn’t believe I found myself in a playoff.”