Woods Plays Through Pain, Makes Another Major Cut At PGA 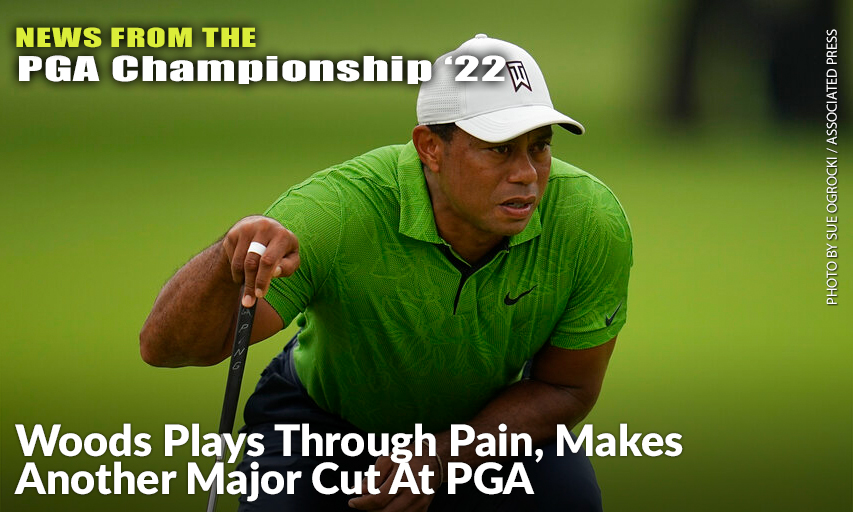 He limped, occasionally used a driver like a cane, and pushed his rebuilt right leg over and through the hills and swales of Southern Hills during the second round of the PGA Championship with a singular mission: to get to the weekend.

And he did it. Woods shot a second-round 1-under 69 that put him at 3-over par for the tournament, one shot inside the cut line. He was in danger of missing the weekend before rallying with two birdies over the final six holes.

“You can’t win the tournament if you miss the cut. I’ve won tournaments — not major championships, but I’ve won tournaments on the cut number,” Woods said after he gingerly walked the few steps up to the stage for his post-round interview. “There’s a reason why you fight hard and you’re able to give yourself a chance on the weekend.”

Few consider that a realistic scenario the way Woods has to fight his body to get through a round. A car crash in February 2021 left his right leg so badly damaged that doctors considered amputation.

Woods returned to competition at the 2022 Masters. He made the cut there and gutted through the weekend at Augusta National in a glorious return in front of adoring galleries. He didn’t play again until returning to the PGA, a championship he has won four times, most recently in 2007 at Southern Hills.

The fans at the PGA Championship have pushed him along again, even when he looked miserable. He opened with a 4-over 74. He said just about everything made his leg hurt that day before he left the course for a night of physical therapy and ice baths.

He recovered well enough to tee it up again in the second round, which by itself impressed playing partner Rory McIlroy.

“Just incredibly resilient and mentally tough,” said McIlroy, who chatted with Woods often during the second round. “He’s feeling it, and he’s feeling it on every swing. ... Yeah, look, he’s the ultimate pro. Looking at him... if that would have been me, I would have been considering pulling out and just going home. But Tiger is different and he’s proved he’s different. It was just a monumental effort.”

Even if it takes a full-team effort to get him back on the course four days in a row.

“Fortunately enough, I’m able to somehow do it,” Woods said. “I’ve had a great [physical therapy] staff that have put Humpty-Dumpty back together, and we’ll go out there tomorrow.”

Woods shut down a question about whether his leg felt better or worse than after the first round. By then, he was done talking about it.

There will be challenges over the next two days.

On the steep slope off the No. 1 tee, Woods has used his driver like a cane to ease his way down the hill. The stairs off the No. 10 tee were also slow going. A ball in a bunker can mean an awkward stance and unsteady feet.

But there are times when he can clear his mind of the aches and pains.

A birdie at No. 5 seemed to straighten his gait on the next few holes until a bogey three holes later had him flirting with the cut line again. On the ninth, he was clenching his jaw before hitting out of the rough into an uphill green.

The real trouble came on the par-3 11th when he missed the green well to the left, then bashed his club against a cart path in anger. A double-bogey followed and he was in danger of ending the week early.

Then came the late rally down the stretch. Woods finally got the cushion he needed with a birdie at No. 16.

Woods finished the Masters with consecutive rounds of 78. He left Southern Hills after the second round hoping for a better finish in Tulsa if his leg will allow it.

“Coming back here to a place that I’ve had success on, to play against the best players in the world, that’s what we all want to be able to do,” Woods said.