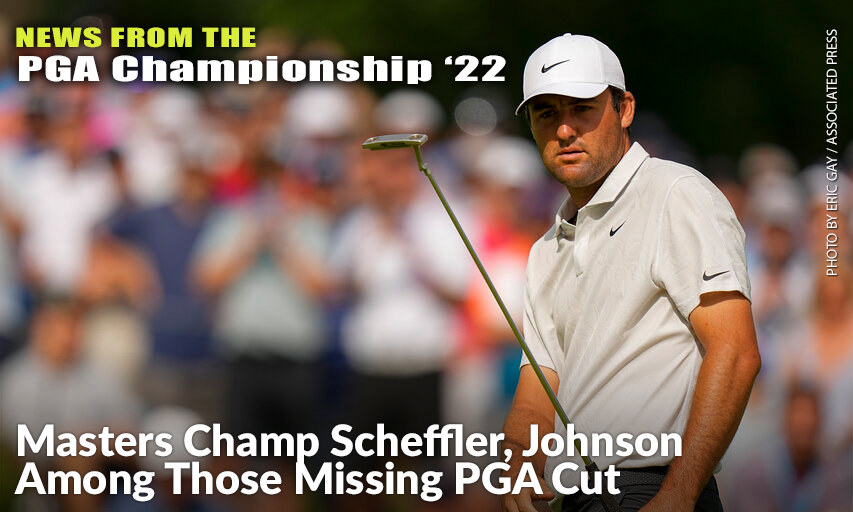 TULSA, Oklahoma — Scottie Scheffler arrived at Southern Hills with a green jacket hanging in his closet, the No. 1 ranking beside his name and the rest of the field pointing to him as the favourite to win the PGA Championship.

The Masters champ headed home after shooting 75 in the second round, finishing at 6 over and missing the cut.

Scheffler wasn’t alone on a mercurial day in Oklahoma, where stiff winds that made scoring difficult early yielded to calm afternoon weather that allowed Bubba Watson to match the PGA record with a round of 63.

Two-time major winner Dustin Johnson shot a second consecutive 73 and also missed the cut. Former Masters champion Adam Scott never recovered from an opening 77 and went home early. So did reigning PGA TOUR player of the year Patrick Cantlay, who rarely found a fairway off the tee and followed his opening 76 with a similarly dismal 75.

“It was very fair. Definitely no gripes with the setup or anything like that," Scheffler said after his opening round when he still thought he could bounce back and contend for his fifth win of the season. “The golf course is very challenging. But the setup was fair. The greens were good. The fairways are in good shape. The golf course is in great shape.”

It was still a brute.

Tiger Woods, who opened with 74, found himself bouncing above the projected cut line when he followed a birdie at the 10th with a double-bogey at the par-3 11th. But despite an aching right leg from the car crash that nearly ended his career, Woods managed two birdies down the stretch to shoot 69 and squeak into the weekend.

Woods was among a bunch of major winners who barely made the cut.

Collin Morikawa, the 2020 PGA champion and reigning British Open champ, made it on the number, despite finishing with consecutive bogeys for a second straight 72. Last year’s Masters champ, Hideki Matsuyama, also posted back-to-back 72s, while Webb Simpson, Louis Oosthuizen, and Charl Schwartzel joined them at 4 over for the championship.

The biggest surprise was Scheffler, though.

He had rolled into Southern Hills as the hottest player in the world, winning the Phoenix Open in February, then following up with victories at Bay Hill and the Match Play. And after Scheffler’s triumph at Augusta — and that silly four-putt on the 72nd hole — he shot four rounds in the 60s to tie for 15th at the Byron Nelson.

He wasn’t exactly sharp in the first round, shooting a 71 that left him lamenting plenty of missed opportunities. But he rattled off nine consecutive pars to start his second round, giving him hope that he could make a charge up the leaderboard.

Instead, Scheffler went the other way.

He bogeyed the first two holes on the front side and then, after a birdie at the fourth, played the final five in 6 over. He drove into the bunker at the fifth and made bogey, missed an 8-footer at the seventh for another, then finished with a three-putt at the ninth for a double bogey and a frustrating end to his PGA Championship.