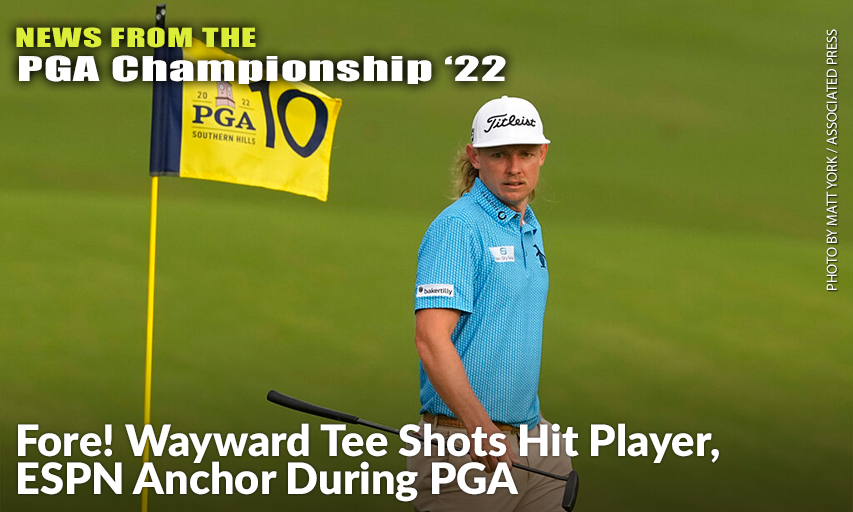 TULSA, Oklahoma — Some of the intrigue heading into the PGA Championship at Southern Hills had to do with the compact nature of the grand old layout, where greens are often so close to tees that players get in logjams waiting for each other.

Turned out it was two relatively wide-open areas of the course where noteworthy people got hit.

In one case, it was one contender hitting another player.

That happened on the par-4 second hole during the second round when Cameron Smith, fresh off a birdie to open his round, hit a wild tee shot that sailed over the trees and into the seventh fairway. The ball wound up striking Aaron Wise, who had opened with a 69 and was on his way toward a second-round 72 that left him 1-over for the championship.

Wise, who was seen holding a water bottle on top of his noggin, managed to par the seventh hole. He also parred the long par-3 eighth before making bogey from the bunker on the final hole and heading in for some treatment.

Wise’s management team said he was doing well and expected to play the third round.

Smith wound up shooting 70 in the second round and was 2-under for the tournament.

Meanwhile, ESPN anchor Sage Steele was flying home to Connecticut after she was struck in the face by Jon Rahm’s tee shot and needed medical attention during the opening round of the tournament.

Steele was covering the PGA for “SportsCenter” and was finished for the day, so she headed onto the course to watch Rahm’s grouping with Collin Morikawa and Scottie Scheffler. That’s when Rahm hooked his shot and, despite frantically waving to warn fans in that direction, the ball hit Steele near her nose and mouth about 280 yards away.

Steele, who also has hosted “SportsCenter” from the Masters, is expected to make a full recovery.

For the second time in three years, no club professionals made the cut at the PGA Championship.

The closest was Matthew Borchert, the pro at Isleworth in Windermere, Florida, who followed up his first-round 73 with a second-round 74. That left him 7-over par and three above the cut line, which landed at plus 4.

Jesse Mueller, an assistant coach at Grand Canyon University, had the best round among the 20 club pros when he holed out for eagle on his first hole and shot a first-round 72 and a second-round 78.

There’s a reason bunkers are considered hazards: They’re supposed to be hard. Yet most pros are so proficient out of the sand that they sometimes prefer hitting there rather than into the rough that surrounds the green.

The bunkers at Southern Hills have been causing some problems, though.

“The individual grains of sand, they’re huge compared to the norm,” said Talor Gooch, who holed out from a bunker in the first round. “I was not trying to land that in the hole; I got really, really fortunate there. It’s a little bit of a guessing game, and a little bit of just good fortune. I think that’s why they’re a hazard. That’s just part of the game.”

Joaquin Niemann shot a second-round 71 to leave him 1 under for the championship, but the way he got there was anything but ordinary. His second round included five birdies and six bogeys to go with seven pars.

Niemann, one of a record six Latin American players in the field, started on the back side and birdied two of his first three holes. But it was a rollercoaster from there for the Chilean, who had a stretch of three bogeys on the front bookended by a couple of birdies. The last came on the difficult par-4 ninth, Niemann’s final hole of the day.

“You think you are in control and then one hole to another, one bad swing, and it — all the way around, it gets a lot harder,” he said. “The course is super hard. You start missing drivers, getting out of the rough, it’s not easy to make pars.”

The greens were not mowed ahead of the second round, which probably was a good idea given the windy conditions, but it also caused problems for some players who had grown accustomed to their slick surfaces in the opening round.

Several in morning groups left putts that would have been close well short of the hole, and by the afternoon, Will Zalatoris cried out after a missed putt that “they’re like Velcro.”

“They can’t get that fast anyway just because they’re pretty slopey, but I don’t think these green surfaces are the smoothest to begin with,” Brooks Koepka said. “And then after not mowing them, you see a little of a trample effect and everything, so it’ll be nice to have some fresh greens this weekend.”