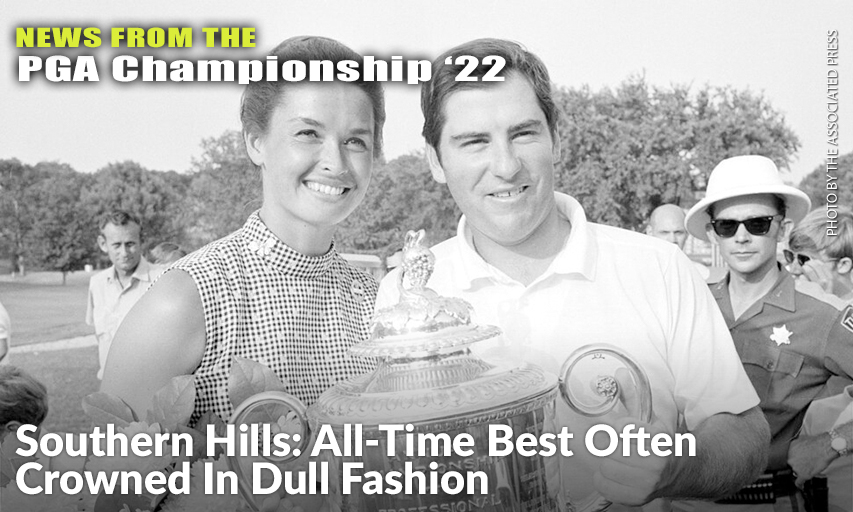 TULSA, Oklahoma — About a month before Dave Stockton won the PGA Championship at Southern Hills, his father gave him the self-help classic “Psycho-Cybernetics” by Maxwell Maltz, and he went through page by page highlighting various passages.

“It was not a fun read,” Stockton said. “It was like reading sandpaper.”

He came away with two tangible ideas, though, that applied perfectly to golf. The first was simple: Be aggressive. The second was something athletes have championed for decades: Visualize that you have already won.

“So rather than coming out here and hoping that I played well, hoping I made the cut, all these different things, I stepped on the first tee on Monday morning at about 7:00 — because I finished by 10:45 — and I visualized I had already won the tournament,” Stockton said. “My mindset was I had already won it and I was going to go out and enjoy it.”

He made it seem that easy, too. Stockton was tied for the lead after the second round, led Raymond Floyd by three after the third and coasted to a two-shot win over Arnold Palmer and Bob Murphy in the 1970 championship.

In doing so, Stockton helped shape what has become a recurring theme at Southern Hills: The venerable Perry Maxwell layout near downtown Tulsa has crowned some of the game's greatest players during more major championships than just about any other American venue, and for the most part, they've been a dreadful bore.

In four previous PGA Championships and three U.S. Opens, Stockton and Tiger Woods are the only ones who did not have at least a share of the lead after the opening round. And none were out of the lead heading into the final round.

Oklahoma native Tommy Bolt led after every round at the 1958 U.S. Open, turning a three-shot lead over Gene Littler after the third into a four-shot win over Gary Player by the end. It wound up being Bolt's only major, though he also played two Ryder Cups and, like everyone else but Stockton who have won at Southern Hills, ended up in the Hall of Fame.

Hubert Green also had at least a share of the lead for every round of the 1977 U.S. Open, holding off Lou Graham by a shot on Sunday. But that tournament is best remembered for what few knew at the time: There'd been a phone call threatening to assassinate Green if he played the 15th hole. He courageously did anyway on his way to his first major title.

Nearing his 40th birthday, Floyd likewise went wire-to-wire at the 1982 PGA Championship, finishing three clear of former champion Lanny Wadkins. He opened with a 63 and was never really threatened the rest of the week.

Nick Price might have had the easiest way with the field in 1994.

Sure, he was tied for the first-round lead with Colin Montgomerie, but he was five shots clear of everyone else after the second round. Price went on to finish 11 under for a six-shot lead over Corey Pavin, becoming the first player to capture the British Open and the PGA in the same year in seven decades.

When majors returned to Southern Hills in 2001, Retief Goosen needed a Monday playoff with Mark Brooks to win the first of his two U.S. Opens. Thrilling in theory, but nobody seemed to want to win on Sunday. Goosen ran a 10-footer past for birdie on the 72nd hole, then missed a 2-footer coming back, leaving him tied with Brooks, who had bogeyed his final hole. And both were a shot clear of Stewart Cink, who missed his own 2-footer to join the playoff.

There were two dominant story lines the last time the PGA Championship was at Southern Hills.

The first was the heat, which neared or exceeded triple digits all four days. The other was Woods, who seized control with a second-round 63. He led by as many as five in the third and fourth rounds before finishing ahead of a largely forgettable cast of characters that included Woody Austin, Aaron Oberholser and John Senden.

“I remember playing behind (John Daly) the first day, which was awesome,” Woods recalled this week. “It was, what, 109 I think that first day? And I asked JD how many waters he drank out there. He said, ‘No, I had 13 Diet Cokes.’”

There are reasons to believe Southern Hills will finally produce a classic this week, though. The field has 95 of the top 100 in the world even after Bryson DeChambeau withdrew late Wednesday. The course itself has had an extensive restoration, returning it to its former glory. The forecast looks clear and pleasant for most of the week.

“It's tough. It's going to be really hard,” said Xander Schauffele, the Olympic gold medalist, who had two top-10s in majors last year. “I think PGA Championships for the most part, people feel like you can kind of shoot lower in them than most majors. But I think this year is going to be a different story.”