Spieth Among PGA Favorites In Quest For Career Grand Slam 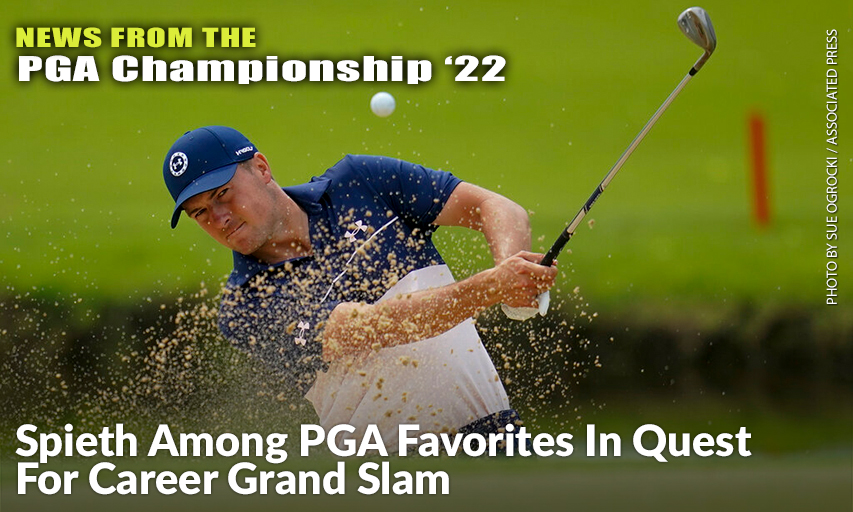 TULSA, Oklahoma — Not long ago, it seemed a foregone conclusion that Jordan Spieth would one day capture golf's career Grand Slam.

Even more recently, it seemed as if he might never contend again.

After scorching a Tiger-esque path through his first five years as a pro, including triumphs at the Masters and U.S. Open in 2015 and the British Open in '17, things suddenly went sideways for Spieth. That crisp ball-striking that was once the envy of so many abandoned him, his driver went a bit haywire and his short game let him down.

The former No. 1 went nearly four years without a win, plummeting to 92nd in the world ranking.

Armed with a retooled swing thousands of shots in the making, though, and brimming with confidence after winning at Hilton Head and finishing second at last week's Byron Nelson, the popular 28-year-old Texan arrived this week at the PGA Championship once again among the favorites to raise the Wanamaker Trophy on Sunday.

And at long last, join that most exclusive club.

“Certainly at this point, having won the other three, it's an elephant in the room for me,” Spieth acknowledged before heading out for Wednesday's practice round. “If you just told me I was going to win one tournament the rest of my life, I’d say I want to win this one, given where things are at.”

History is not necessarily on his side.

Of the five players to have won the Grand Slam, none waited more than three years for the final leg. Gene Sarazen in 1935, Ben Hogan in ‘53 and Tiger Woods in 2000 did it in their very first try; Jack Nicklaus and Gary Player weren’t far behind.

Some of the game's greatest players never do it, either.

Arnold Palmer's victory in the 1961 British Open left him, much like Spieth, needing only the PGA to finish it off, yet he'd play the tournament 34 times without winning. Phil Mickelson's vexing second-place history at the U.S. Open is well-documented. The same tournament is also missing from three-time PGA champion Sam Snead's resume. Byron Nelson and Raymond Floyd never won the British Open while Lee Trevino won every major (twice) except the Masters.

“Long-term,” Spieth said, “it would be really cool to say that you captured the four biggest tournaments in the world, that are played in different parts of the world, and different styles, too. You feel like you kind of accomplished golf."

It's a feeling that Rory McIlory, who will play with Spieth and Tiger Woods for the first two rounds at Southern Hills, knows too well. The two-time PGA champion has taken eight swings at winning the Masters since it became the lone major missing from his own ledger, and has been in the top 5 four times, with a second-place finish earlier this year.

“I think the most consistent way to get yourself to be able to have chances to win these major championships is to sort of adopt a conservative strategy,” McIlroy said. “Tiger did it most of his career, and OK, he had a couple of huge wins in there, but a lot of times being conservative with his strategy, letting other guys make the mistakes — pars are pretty good in major championships, and that’s sort of the philosophy that I believe in going forward.”

Another word for conservative could be deliberate, and that's a good way to describe Spieth these days.

When mired in mediocrity, he tore down his swing and began to rebuild it. Spieth implemented a curious pre-shot rehearsal — almost mechanical in nature — designed to get into the proper position at the right tempo. The deliberate routine isn't just for the driving range or practice rounds, either. Spieth takes it right onto the course with him.

“I get to my ball quickly, I play faster than I used to, I’m not slowing anybody down, and I make better, more committed swings with it,” he explained. “At this point, that’s where I’m at, and that’s what I’ll keep doing. It’s just trying to — like I’ve mentioned before — going back to go forward, going back to my DNA on how I’ve swung the club growing up.”

Like he was swinging it in 2015, when Spieth won the year's first two majors and people began to whisper of the Grand Slam. Or a couple of years later, when he added the Claret Jug to his trophy case, leaving only the PGA still missing.

“You want to win any major," said Justin Thomas, “and this one is just always going to be put on a little bit more of a pedestal than the other ones for him. I know he’s going to be fine. And I’m not just saying it because he’s one of my best friends. I mean, I’ve just seen him get it around when he’s not playing well. I’ve seen him play well when he is playing well. All of us go through little spurts. It’s just for him, this has just been a tough one. I mean, he’s going to be fine.”