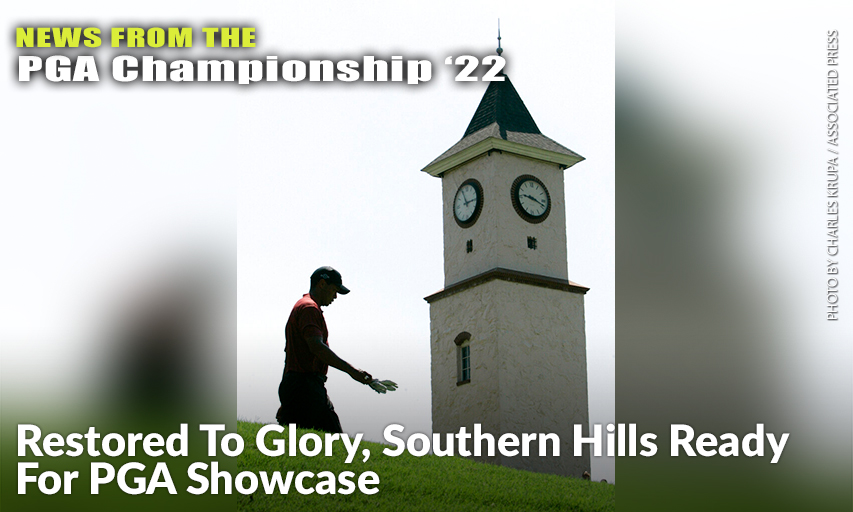 TULSA, Oklahoma — Matt Kuchar was flopping shots out of the rough during his practice round at Southern Hills when he chunked one so fat that it came up several yards short of the hole, teetering precariously on the edge of the green.

“Knock that back to me,” Kuchar told playing his partner, Dustin Johnson, who replied simply: “I don’t think I have to.”

Just as he predicted, the ball began trickling back off the green, finally stopping at Kuchar’s feet some 20 yards away.

It’s the kind of thing that could happen on any number of holes during the PGA Championship, hilarious to fans and maddening to players. But it’s also what famed golf course architected Perry Maxwell had in mind when he first laid out the venerable course near downtown Tulsa nearly 90 years ago, and what Gil Hanse and Jim Wagner tried to restore when the club’s membership asked them to take it back to its roots in time for its next major championship.

“I think,” Thomas said, “this is an unbelievable major championship venue.”

It’s been a popular one, for sure, the first to host five PGA Championships and one of the few to have hosted it along with the U.S. Open multiple times. But the course where Tiger Woods won the PGA in 2007, and Retief Goosen the U.S. Open in 2002, is far different from the one that Jordan Spieth, Scottie Scheffler, and everyone else will face.

It’s more like the one where Tommy Bolt triumphed in the 1958 U.S. Open.

The course had changed over the years. It had grown and evolved. Entire creeks that were once in play had disappeared amid thick stands of trees. And those greens, with their trademark “Maxwell’s rolls,” had lost their original character, turning into saucers that welcomed poorly hit approach shots rather than subtle mounds that rejected them.

It was up to Hanse and Wagner, fresh off a similar restoration of Los Angeles Country Club, to peel back the layers of time.

They got help from Southern Hills club historian Clyde Chrisman, who provided photographs and other material from when the club was established in 1936, along with superintendent Russ Myers, who had worked with them on other projects.

The restoration of the greens was perhaps the biggest change, but it was hardly the only one. Hundreds of trees were removed to create open views across the property. Landing areas were widened. Bunkers were reshaped and moved to more accurately reflect the challenge that Maxwell intended in the days before 300-plus-yard drives became standard.

“I think they did an incredible job,” said the PGA’s Kerry Haigh, who is responsible for setting up the course for the tournament. “They added five or six new tees for the back. State-of-the-art hygronics on the greens for cool-season grasses here in the hot heat of the summer. And all of that just gives us more sort of canvas to test the best players. It provides a lot more shot options, a lot more shot variety, a lot more options to hit woods or drivers off the tee.”

Southern Hills is not necessarily unique in that regard. Many of the nation’s historic courses have undergone extension restoration efforts in recent years. Hanse has helped to reshape Merion, Winged Foot, and The Country Club, while Bill Coore and Ben Crenshaw have worked on such esteemed layouts as Pinehurst No. 2, Riviera, and Seminole.

“The game has changed a lot,” Woods said before his practice round, “and because the game has changed a lot, Gil has done a fantastic job of altering the golf course. It has a lot more shot options, that’s for sure. And we are going to be tested around the greens a lot. A lot of grain, a lot of creativity, but it still puts a premium in putting the ball in play and in the fairway and somehow below the holes in the right spots.”