Scottie Scheffler Arrives At PGA As Understated World No. 1 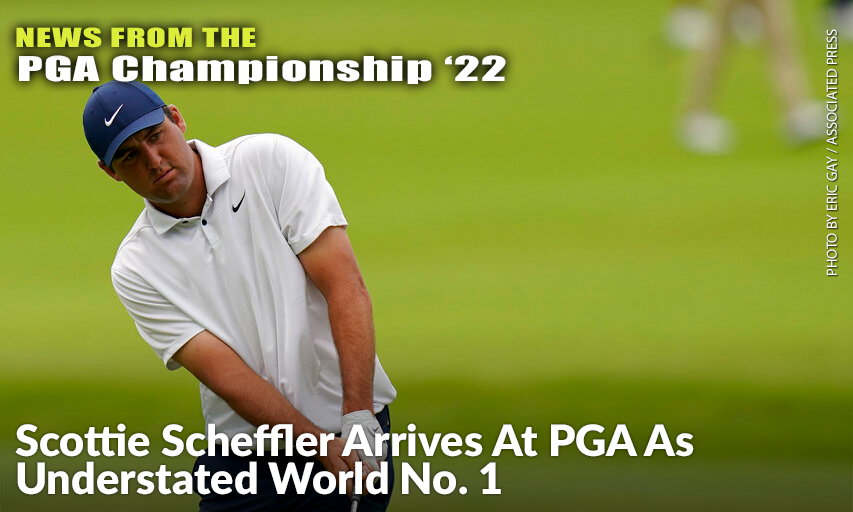 TULSA, Oklahoma — Scottie Scheffler has earned the right to strut onto the first tee at Southern Hills and puff out his chest, an unintended yet unmistakable consequence of winning the Masters, ripping off three more victories and rising to No. 1 in the world.

“The thing I love so much about Scottie is that he’s just a good dude,” said his childhood friend and rival Will Zalatoris, “and it tastes like vinegar coming out of my mouth considering the amount of golf we’ve played together.”

You see, Scheffler doesn’t strut so much as amble, and if he’s puffing out his chest, he’s probably out of breath. For all his success, he was able to go about business as usual during his practice round Tuesday, which tends to be a whole lot easier when most of the fans watching outside the ropes still don’t recognize his easy gait and charming smile.

“Tiger’s here,” Scheffler quipped, “so nobody really remembers that I’m here, so it’s all good.”

That’s quintessential Scottie: Rather than an abundance of arrogance, he offers an overwhelming measure of modesty.

After spending most of the past two years contending week to week, the 25-year-old broke through in February in Phoenix and never slowed down. Scheffler won a few weeks later at Bay Hill, defeated Kevin Kisner in the finals of the Match Play, then conquered his nerves to triumph at Augusta — despite a cringe-inducing four-putt on the 72nd hole.

There is no hotter player in the world heading into this week’s PGA Championship.

The rankings say there’s no better player, either.

“He won Augusta, No. 1 in the world — you’ve kind of got that swagger when you walk on the range. I know I did,” said two-time PGA champion Brooks Koepka, who also won two U.S. Opens and spent 47 weeks at No. 1.

On anyone but Scheffler, maybe.

Perhaps it’s because, despite being born in New Jersey, Scheffler is decidedly Midwestern nice, a fact that just happens to play well in Oklahoma. Or because all that success has come so quickly — Scheffler could become the first person since Tom Watson in 1980 to win five times by the end of May should he hoist the Wanamaker Trophy.

“Living in the moment is usually what works best for me,” he said. "I don’t want to get too high or get too low. So if you guys are building me up, then you know, I may not prepare as hard because I show up being like, ‘I’m the guy, I’m the man and no one can touch me.’ That doesn’t work for me. And if I show up too low then you guys are saying, ‘Oh, Scottie doesn’t have it. He’s not any good anymore,’ then I’m going to show up and maybe I’m going to prepare too hard.

“So for me,” Scheffler said, “kind of staying in my own lane and doing my own thing is what works best.”

It has worked well so far.

All of those players are in the World Golf Hall of Fame except Spieth, who is destined for it one day. And that’s some pretty heady company, whether the down-to-earth Scheffler wants to admit it or not.

More than likely not.

“When I show up to tournaments, it’s a little bit different,” Scheffler said. “There’s more people kind of hollering at me when I’m playing a practice round, wanting to get signatures or whatever it is. You know, at home, I’ve been recognized a few more times than I did in the past. But I kind of stay in my own little bubble, and for me, not much has changed when I’m at home. Not much has changed the way I practice. When I show up to tournaments, I don’t feel any different."

Plenty of others view him differently, though. Scheffler is suddenly the one to beat at the PGA and, along with Jon Rahm, the favourite according to FanDuel Sportsbook to join an exclusive list of players that have won multiple majors.

“I want to win this tournament as bad as any other one,” Scheffler said. “For me not much changes, whether it’s the PGA, Masters, British Open, whatever it is. I’m an extremely competitive person. I want to win. For me winning is fun.”