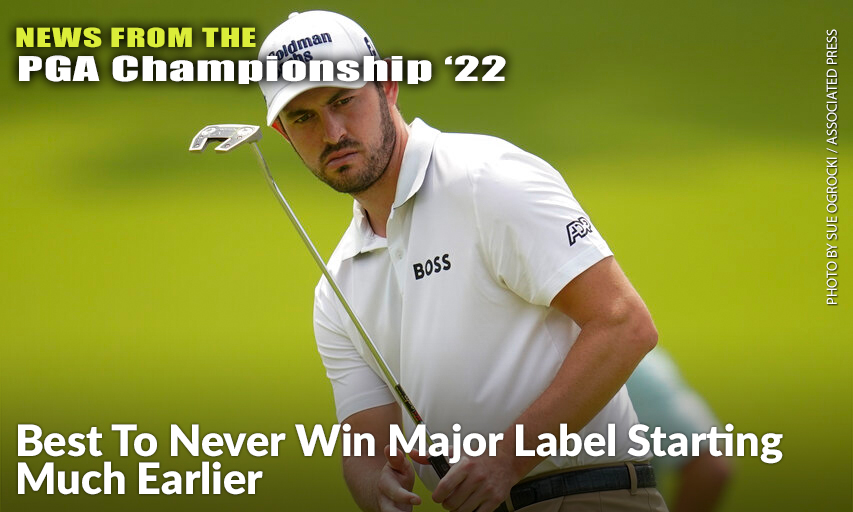 TULSA, Oklahoma — Jerry Barber holds a distinct place in history at the PGA Championship. He was 45 when he won an 18-hole playoff at Olympia Fields to become the oldest first-time winner of a major.

Viktor Hovland already is being asked about winning his first major.

One big distinction, of course, is that Barber was rarely on anyone’s radar at the majors. He had won five times in his 12 years on tour before it all came together for him one week in late July in the south suburbs of Chicago.

Hovland doesn’t have that luxury. Never mind that he’s a month away from finishing his third full year on tour. The Norwegian star already has six victories worldwide and has reached as high as No. 3 in the world ranking.

Majors are the next step, and the golf public is watching.

That goes for Xander Schauffele (28), and most prominently — at the moment, anyway — for Patrick Cantlay, who turned 30 a few months ago. Because of a back injury that nearly ended Cantlay’s career before it got started, this is only his fifth year of a full slate of majors.

Time waits for no one, especially now.

Golf has been getting younger for a long time, most of them inspired by watching Tiger Woods set the standard by winning so many majors.

Just two months ago, the top five players in the world were all in their 20s.

That might be one reason why no one really talks about the one label in golf that always felt like a back-handed compliment: the best to have never won a major.

The answer is probably Lee Westwood, mainly because he’s been around the longest — he is closing in on 750 tournaments dating to 1994 — although he hasn’t seriously contended in a major since Danny Willett beat him to the Masters green jacket in 2016.

Rickie Fowler? He would be a decent candidate at age 33. Even though he has nine wins around the world, and in 2014 finished among the top five in every major, he is on the verge of falling out of the top 150 in the world ranking for the first time since his rookie year in 2010.

Are players under pressure to deliver a major at a younger age?

“I’m not sure. I don’t know what the media coverage was like before," Cantlay said. “I know Phil (Mickelson), that was the narrative with him for a long time, and then he knocked off a bunch in his 30s. I think that’s just kind of the way that people talk.”

Media coverage once was all about that, especially with Mickelson, who didn’t bag the first of six majors until he was 33.

Tom Kite, twice the leading money winner on the PGA TOUR and now in the World Golf Hall of Fame, didn’t get his first major until he was 42 in the 1992 U.S. Open at Pebble Beach. He was considered among the best to have never won a major until then.

Paul Azinger won the PGA Championship in 1993 for his first major at age 33, getting off the list. Corey Pavin won his first at age 36 in the 1995 U.S. Open at Shinnecock Hills. The most recent was Sergio Garcia winning the Masters in 2017 at age 37. No one ever played more majors as a pro (70) before winning his first one.

Cantlay had said even before the Masters when asked about his major record — two top 10s, only one good chance at winning — that it wasn’t a good sample size. “Ask me in 15 years and we’ll see,” he said in March.

“With everybody, there [are] different narratives, and they always try and pick out where you think this person should have performed a little better,” Cantlay said. “Rarely do you hear the opposite. Maybe the only person you hear the opposite about is Scottie Scheffler right now.”

Scheffler won the Masters at age 25, making him the fifth player in the last eight majors to have won his first major in his 20s. Even with a constant influx of youth, that makes the list of those without a major get a little smaller.

Justin Thomas won his first major five years ago in the PGA Championship when he was 24. For the last few years, he has been grilled about when he will get the next one.

Not lost on Thomas: That question is a lot better than the alternative.

“I sure as hell would rather have one than zero,” he said with a laugh.

Winning the second has proven to be just as difficult, perhaps a reminder that winning majors is difficult at any age.

Woods just made it look easy for so long.

And because Woods inspired so many players, the questions about winning that first major are starting earlier than ever.

“I’m sure for Viktor Hovland to come out here, and it’s like, ‘When are you going to win a major?’ And he’s been out here for three years,” Thomas said. “I haven’t been out here that long. But the age of when I first came out here of asking when guys were going to win their first one versus now is quite a bit different.”