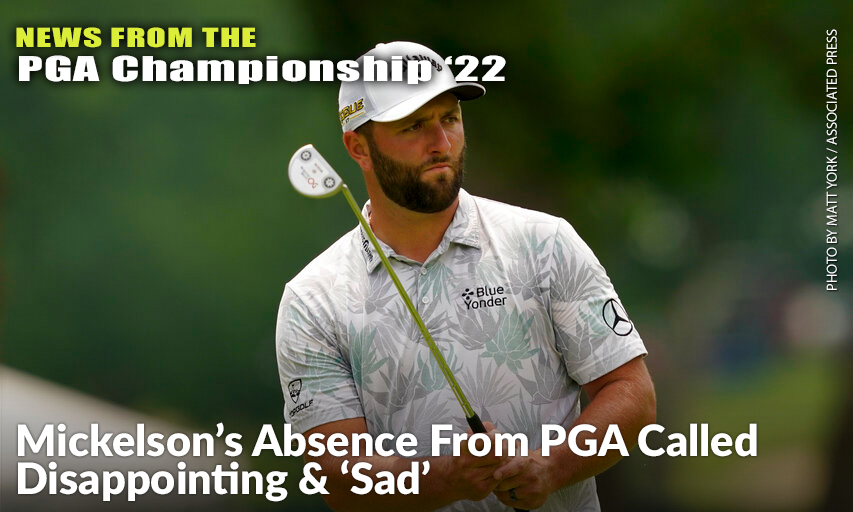 TULSA, Oklahoma — Phil Mickelson isn’t even at Southern Hills and he’s still the talk of Tulsa.

Hardly a player could escape the microphone without addressing Mickelson’s decision to skip the PGA Championship after his incendiary comments about a Saudi-funded rival league he supports in conflict with the PGA TOUR.

Mickelson also skipped the Masters. But the PGA Championship feels like an even bigger deal. It was supposed to be Lefty’s victory lap after his stunning win in 2021 at age 50.

“Unfortunate. Sad,” Rory McIlroy said. “This should be a celebration, right? He won a major championship at 50 years old. It was possibly his last big, big moment in the game of golf. ... I think he should be here ... celebrating what a monumental achievement he achieved last year.”

Jon Rahm called Mickelson a “good friend” who has to do what’s best for himself.

“I can’t remember the last time a major champion didn’t defend a title,” Rahm said. “I would have liked to see him defend. ... (But) he’s got to do what he’s got to do.”

Tiger Woods also called it “disappointing” not to have the defending champion tee it up. Then he teed off on the issue of the Saudi-funded events.

“Phil has said some things that I think a lot of us who are committed to the tour and committed to the legacy of the tour have pushed back against, and he’s taken some personal time,” Woods said. “And we all understand that.”

Not everyone was too wrapped up in the missing champ, however.

“Not here. There’s not really much else I can say,” said two-time PGA champion Brooks Koepka, who was outplayed by Mickelson in the final pairing last year.

Justin Thomas wanted to focus on the week ahead.

“I don’t really have an opinion. I never wish bad on anybody. It’s just I’m here to try to win a golf tournament and try to win the PGA Championship,” Thomas said.

A player’s putting coach is supposed to calm his nerves, not irritate them.

Koepka was an hour late for his news conference and practice round after putting coach Jeff Pierce locked the car keys with his golf bag inside the trunk of his courtesy vehicle.

“I watched him unlock the car, start the car, then he grabbed the bag, put it in the trunk, shut the trunk, and I went in and grabbed a hat, walked right out, and then the car was locked,” Koepka said. “I don’t know how the keys locked inside the car. It boggles me. I didn’t think a car was supposed to do that, but apparently, it does.”

Koepka briefly considered calling a ride service, but that was pointless because he’d have to leave his clubs behind. He waited until a spare key arrived.

Bryson DeChambeau practiced to test his surgically repaired left wrist. He has said he will play if there are “no major issues.”

“Going to test how I am feeling over these next couple days and decide on whether to compete,” he tweeted. “Looking forward to being in Tulsa.”

He was on the course wearing a wrap that extended several inches up his left forearm.

The 28-year-old had surgery to repair the hamate bone in his wrist on April 14, a procedure that was expected to sideline him for up to two months. He removed his cast and bandages more than a week ago and teased an early return when he posted an online video of himself hitting a driver.

DeChambeau missed the cut in three of his past four starts and has just one top-25 finish in five starts this season.

A trip to the concession stand for a cold one during a hot and sunny week is liable to cause some fans some sticker shock.

“I was just blown away because I’ve never seen a beer $18 or $19 in my life,” Thomas said. “Guys have been talking about it, so I, you know, had to stand up for the fans. Felt like it was right.”

Koepka noted the beer cans are plenty big — 25 ounces, to be exact. So, you pay more, you get more.

“It’s bigger than the normal ones, so you’ll be all right,” Koepka said. “You drink enough, you’ll be fine.”

Nine players in the PGA Championship field played the 2009 U.S. Amateur at Southern Hills, including Rickie Fowler and Jordan Spieth, and all of them hope for better results on Perry Maxwell’s restored masterpiece this week.

Fowler, who turned pro later that summer, lost 3 and 1 in the first round of match play. Talor Gooch and Brian Harman also went down in their opening matches, while Cameron Tringale was eliminated in the quarterfinals.

At least they survived two rounds of stroke play at Southern Hills and nearby Cedar Ridge Country Club.

Beau Hossler, an eighth-grader at the time, missed the cut. So did Tom Hoge. Patrick Reed played his way out of contention with an 83 at Southern Hills. Spieth made it around in 75, shot 73 at Cedar Ridge, then lost out on a 27-man playoff for the final four match-play spots.

Then there was Patrick Cantlay, who was asked about his memories.