Tiger Woods Says He’s All About Majors, A Mickelson Rebuke 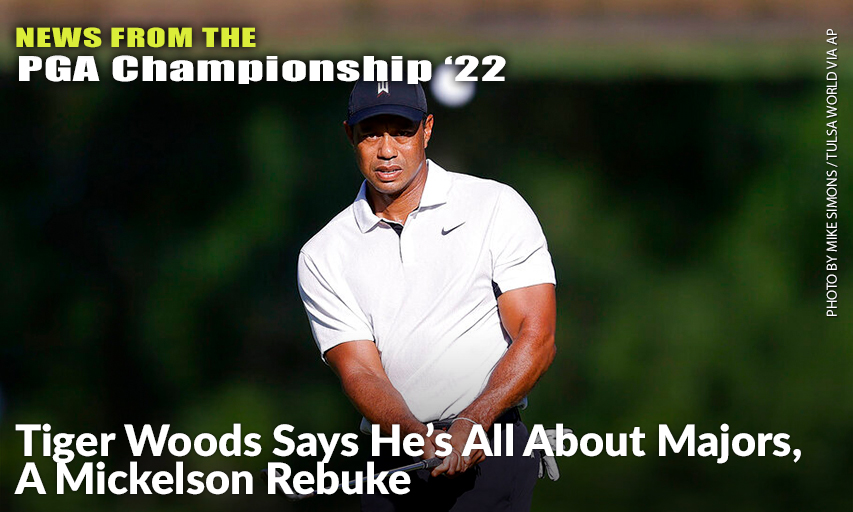 TULSA, Oklahoma — Tiger Woods is all about majors and legacy, a point he drove home in a sharp rebuke of Phil Mickelson and his support of a Saudi-funded golf venture that led to Lefty not defending his title at the PGA Championship.

Even as Woods resumes a remarkable return from a car crash 15 months ago that nearly led to his right leg being amputated, the PGA Championship cannot escape the absence of Mickelson and speculation about who might sign up for Greg Norman’s new Saudi-backed golf series.

Woods said he has not tried to reach out to Mickelson since his self-imposed hiatus from golf three months ago, mainly because of their difference of opinion on how golf should be run.

“There’s plenty of money out here,” he said. “The tour is growing. But it’s just like any other sport — it’s like tennis — you have to go out there and earn it. You’ve got to go out there and play for it. We have [the] opportunity to go ahead and do it. It’s just not guaranteed upfront.”

That was a reference to some of the Public Investment Fund money out of Saudi Arabia being offered to players to join Norman and his LIV Golf Investments. According to various reports out of Britain, some top players were being offered more than the $120 million Woods has made in career PGA TOUR earnings.

Mickelson showed his hand in two interviews published in February. He accused the PGA TOUR of “obnoxious greed” while playing in Saudi Arabia, and more incendiary comments followed when Alan Shipnuck published an excerpt of his unauthorized biography on Mickelson.

Mickelson said the Saudis were “scary mother-(expletives) to get involved with,” and then dismissed its human rights atrocities — such as the killing of Washington Post columnist Jamal Khashoggi — by saying it was worth it to gain leverage to make changes on the PGA TOUR.

He also said he didn’t care if the Saudi league failed, as long as the tour made changes he wanted.

Mickelson decided he would not play at Southern Hills, missing out on a chance to be celebrated for his historic win at Kiawah Island when at age 50 he became golf’s oldest major champion.

He is the first PGA champion not to defend since Woods was recovering from knee surgery in 2008 and skipped Oakland Hills.

"It’s always disappointing when the defending champion is not here," Woods said. “Phil has said some things that I think a lot of us who are committed to the tour and committed to the legacy of the tour have pushed back against, and he’s taken some personal time, and we all understand that. But I think that some of his views on how the tour could be run, should be run, been a lot of disagreement there.”

“He’s just taking his time and we all wish him the best when he comes back.”

Woods, meanwhile, is back and more optimistic than he was a month ago at the Masters. He said those who are close to him were thrilled to see him walk all 72 holes at Augusta National, his first time walking while competing since the February 23, 2021, accident in Los Angeles that shattered bones in his right leg and ankle.

All he could think about the day after was a bad putting week that led to a 78-78 weekend.

“I did not see it that way Monday,” he said. “I was a little ticked I didn’t putt well, and felt like I was hitting it good enough and I wish I had the stamina.”

He said the Monday after the Masters was a tough day of recovery, and then he went right back to work trying to gain strength and endurance.

“It’s better than the last time I played a tournament, which is good,” Woods said.

He is the defending PGA champion at Southern Hills, having won by two shots in 2007 for his 13th of what is now 15 majors. And he barely recognized the course after a restoration project that brought back a few meandering creeks and returned the edges of the putting surfaces so they funnel shots away from the green.

The bigger challenge is the players he is trying to beat, which make up the strongest field of the majors. Woods is 46, and Mickelson showed a year ago that age is only a number. However, Mickelson had been playing a full schedule all along. Woods, with his injuries, would appear to be limited to the four majors this year at most.

One help is the nature of the walk. Augusta National is among the toughest in golf. Southern Hills features a sharp drop from the first and 10th tees and a tough climb at the end of each nine. Otherwise, it’s a relatively gentle stroll.

“Figured the first mountain you climbed was Everest. That’s the steepest golf course you’re going to play and that was the first one you climbed and climbed it,” Woods said. “It’s going to get flatter and better.”

He still struggles on certain days. He said it’s never as easy as it might look.

“But I feel like I’m doing better,” he said. “I’m having more days which are better, more positive.”