Fowler Back Home In Oklahoma Still Trying To Find His Form 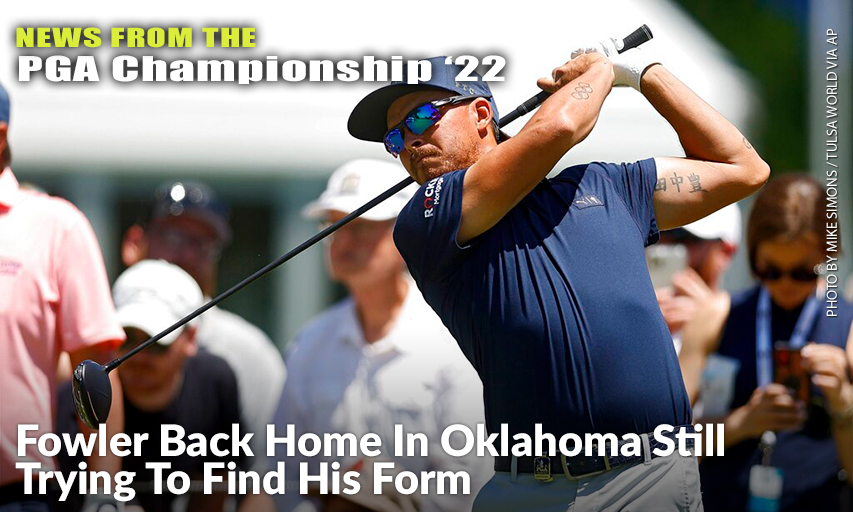 TULSA, Oklahoma — Rickie Fowler stood for nearly 20 minutes answering still more questions about his game and how can he get it back to where it used to be when he was a force in golf and notably in the majors.

Every now and then, he’d cross his arms or scratch his elbow, subconsciously flashing the tattoo of the Olympic rings across his right forearm.

That tattoo is a link back to 2016 in Rio de Janeiro when Fowler represented the United States at the Olympics and was at the top of his game in a three-year run that saw him reach as high as No. 4 in the world. A zest for fun (note the tattoos), easy smile, and breezy demeanor made Fowler one of the most popular players on tour

Eight years later, the now 33-year-old is three years removed from his last victory heading into the PGA Championship, and on the verge of falling out of the top 150 in the world for the first time since his rookie year in 2010,

There’s some consolation that he’s back “home” in Oklahoma, where the California native was a two-time college All-American at Oklahoma State and got to play the course at Southern Hills more than a dozen times.

“So excited about the week and yeah, anytime I get to be in Oklahoma, I feel at home,” Fowler said.

Sweet nostalgia only lasts so long. It won’t find the fairways or roll the putts.

Fowler has been searching hard for the elusive answers to the struggles that have left him far off the leaderboards of late. He says the struggles have been both mental and physical.

“It’s been a lot longer road than we’ve wanted it to be ... I’m not trying to be the same as I was or anything like that. I’m trying to be [the] best that I can be," Fowler said.

“I know it’s there. It’s more just the confidence-building right now. The last couple of years, it’s been really tough to build momentum, and momentum is really what builds confidence and you can kind of start riding that wave,” Fowler said. “Yeah, there’s been no swell. I haven’t been able to ride anything.”

Fowler’s last win was in 2019. But there was a time when he was a force in the majors, with eight top-five finishes, including three as runner-up. His best finish at the PGA Championship was third in 2014 when he was a threat in every major that year.

The drop-off to the present has been dramatic. Fowler has just one top-10 finish and six missed cuts in 13 events this season. The previous two years saw just three more top-10 finishes.

There have been a few flickers of the old form. He finished tied for eighth at the 2021 PGA Championship to earn his 2022 spot. He was tied for 21st at the Wells Fargo Championship after missing the cut the previous two tournaments.

Still, all that does is raise more questions about why it doesn’t happen more?

Fowler still answers them with a smile. If he’s feeling the stress, he certainly doesn’t show it. And, he says, it’s not like it’s been terrible for him.

“I’ve actually enjoyed it as much as it sucked. I’ve definitely found myself. Not that I ever fell out of love with the game or anything like that, but I’ve embraced the grind and the aspect of just taking every day and going out and enjoying it, even though we have been in tough spots,” Fowler said.

He talks of playing casual rounds with friends or just spending time with his wife and child.

“I love to just play and play for fun, and sometimes, it’s just going and messing around with some buddies and not really caring too much what’s going on or what you’re shooting, something like that,” Fowler said.