A Capsule Look At Top Contenders For The 2022 PGA Championship 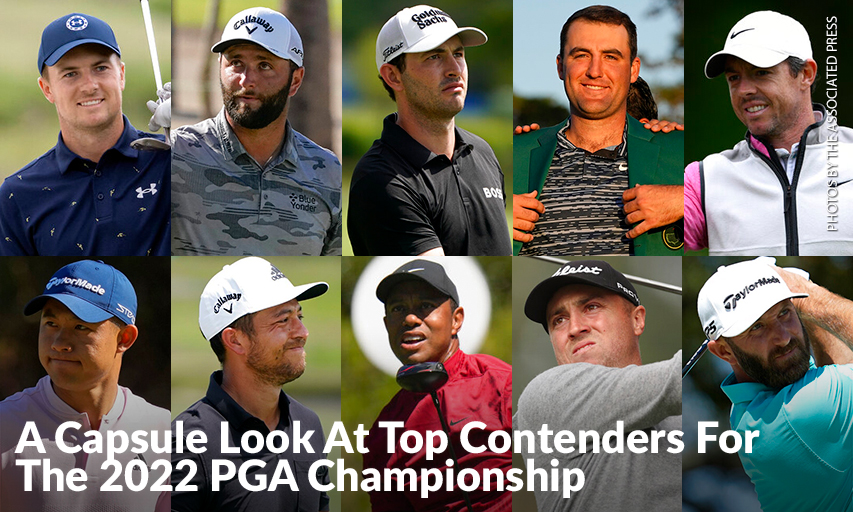 A capsule look at 10 top contenders for the 104th PGA Championship, to be played May 19-22 at Southern Hills Country Club in Tulsa, Oklahoma (listed in predicted order of finish).

PGA Championship Moment: Finishing runner-up to Jason Day at Whistling Straits in 2015 in his bid to become the first player to win the American Grand Slam. He reached No. 1 in the world for the first time.

Backspin: In his sixth attempt at completing the career Grand Slam, this might be Spieth’s best chance. His swing has become more reliable, and he rebounded from his first missed cut at the Masters by winning at Hilton Head. Tiger Woods in 2000 was the fifth and most recent player to get the career slam.

PGA Championship Moment: Shooting 68 or better all four rounds at Bellerive in 2018 and being in contention in the final hour until tying for fourth.

Backspin: The Mexico Open marked his sixth consecutive season with at least one victory. It also gave the Spaniard a shot of confidence from the start of the year in which he grew tired of not seeing putts go in. Another major victory could put him back at No. 1 in the world.

PGA Championship Moment: Making two eagles in the opening round at Kiawah Island last year. He also had five bogeys and no birdies.

Backspin: The FedEx Cup champion has come into his own except in the majors. This would be a good opportunity and his game is in excellent shape. He had a pair of playoff losses to Scottie Scheffler in Phoenix and Jordan Spieth at Hilton Head.

PGA Championship Moment: Playing in the final group Sunday in his PGA debut at Harding Park.

Backspin: Right when it looks as though his remarkable streak of great play will come to an end, Scheffler wins the Masters. All four of his wins have come in his last seven starts, and he has experience at Southern Hills from college. He will try to become only the fourth player in the last 50 years to win the first two majors of the year.

PGA Championship Moment: Setting the PGA record with an eight-shot victory at Kiawah Island in 2012.

Backspin: McIlroy is entering his eighth year since winning his last major. Hopes were built on his closing 64 at the Masters for a runner-up finish, though he never had a chance to win. He hasn’t broken 70 in the opening round of a PGA since his last victory at Valhalla in 2014.

Backspin: He hasn’t won since the DP World Tour Championship in Dubai, and he hasn’t seriously contended since then. But he’s all about majors. A victory would be three straight years with a major. Brooks Koepka, Tiger Woods and Phil Mickelson are the only players who have done that in the last 30 years.

PGA Championship Moment: A 66 in the opening round at Harding Park, his lowest score in the PGA.

Backspin: His last PGA Tour victory was more than three years ago. That doesn’t account for his Olympic gold medal in Tokyo last summer. He had been relatively quiet until teaming with Patrick Cantlay to win in New Orleans. Has finished in the top 10 in nine of his 19 majors.

PGA Championship Moment: Becoming the first back-to-back PGA champion in stroke play with a playoff win at Valhalla in 2000.

Backspin: Woods already defied the odds by returning from a car crash that crushed his right leg and not only playing in the Masters, but making the cut. He’s had five weeks to rest and improve and now returns to a Southern Hills course where he won his fourth Wanamaker Trophy.

PGA Championship Moment: Winning at Quail Hollow and celebrating with his father, a former PGA of America officer and longtime club pro.

Backspin: Thomas now has gone 14 months since his last win at The Players Championship, and the biggest struggle has been his putter. He has only four top 10s in the 15 majors he has played since winning the PGA Championship in 2017.

PGA Championship Moment: Grounding his club in the sand at Whistling Straits without realizing it was a bunker, costing him a spot in the playoff in 2010.

Backspin: This will be his first major as a married man, tying the knot three weeks ago to Paulina Gretzky. On the golf course, Johnson has been in a slump. His last win was 15 months ago in the Saudi International. He was No. 1 in the world at the PGA last year. Now he’s No. 11.