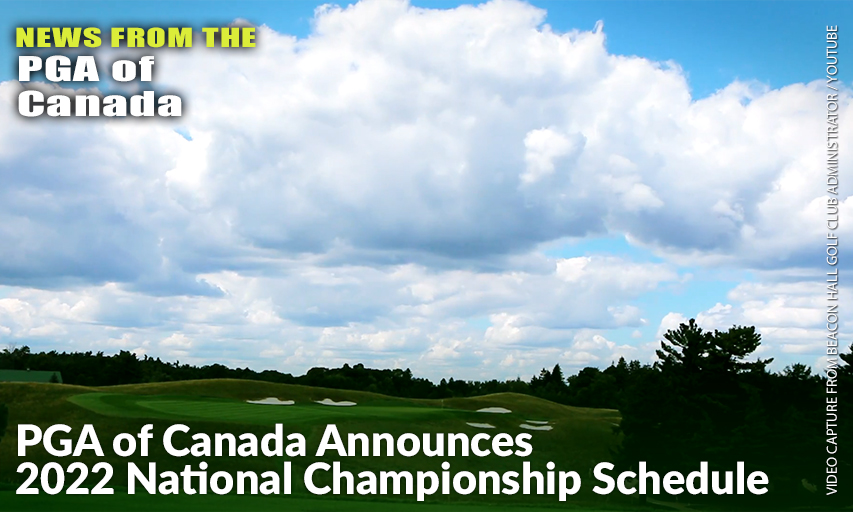 The PGA of Canada is pleased to announce the national championship schedule for the 2022 season. While the 2021 season saw all events condensed into the final few months of the summer due to COVID-19 restrictions, we are excited to return to spreading our events throughout the summer and fall months this season.

The 2022 schedule is highlighted by the 100th playing of the BetRegal PGA Championship of Canada. With a list of champions that includes greats of the game like Arnold Palmer, Moe Norman and Lee Trevino, the 100th edition of the event is going to be a special celebration for the association and history of the tournament.

The 72-hole event will lead off our tournament season, June 20-24 at Beacon Hall Golf Club in Aurora, Ontario. The defending champion is Riley Fleming, who teaches out of Lynx Ridge Golf Club.

From there, we will quickly move east to Bromont, Quebec, as we welcome new title sponsor ORORO Heated Apparel to the PGA Women's Championship of Canada. Chateau Bromont will host the top professional and amateur women in the country June 28-July 1 for the 54-hole event. This is the first year that the PGA of Canada will run the event alongside our friends at Golf Quebec. Christine Wong, who teaches out of University Golf Club, is the defending champion.

The first of those two events is our final championship hosted on Canadian soil this year, as the 54-hole PGA Assistants' Championship of Canada presented by Callaway Golf is slated for September 11-14 at The Algonquin Resort in St. Andrews, New Brunswick. The 2021 event was won by Vespra Hills Golf Club Apprentice Professional Branson Ferrier.

Finally, the top head professionals, head teaching pros, executive professionals, and general managers from across Canada will look forward to December sunshine as the Head Professional Championship of Canada presented by Callaway Golf with support from G&G Brands will be played at Verrado Golf Club - VICTORY COURSE in Buckeye, Arizona, December 5-8. The defending champion is Nick Kenney, Head Teaching Professional at The National Golf Club.

Verrado Golf Club previously hosted the Head Professional Championship of Canada in 2015, when Danny King won by two strokes over James Skrypec. Participants this year are in for a new experience, as the 2015 event was held at the Founders Course at Verrado Golf Club, while this year's event will be played on the VICTORY COURSE. 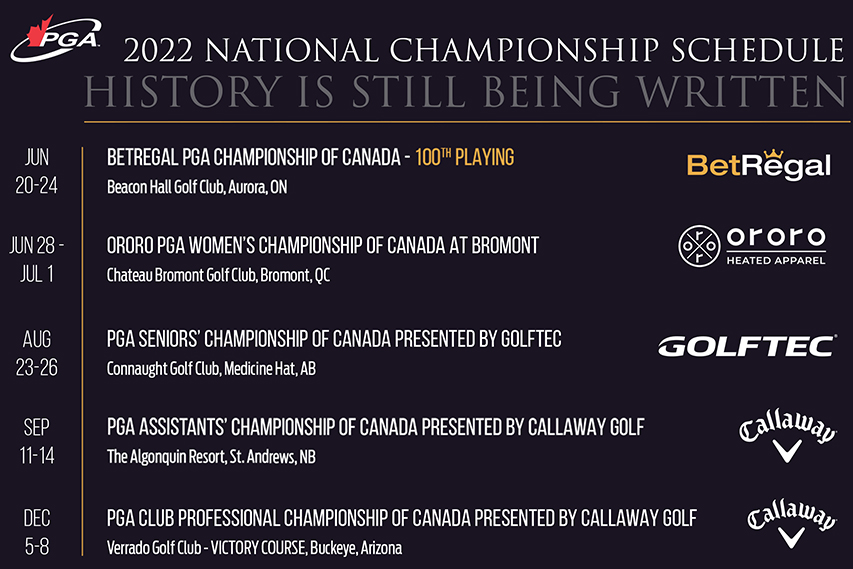 Please note that as of 2019, the Board of Directors approved guidelines allowing female members to participate in the PGA, Seniors’, Assistants’ and Head Professional Championships from a yardage of 86-88% shorter than the other competitors.

“We are heading into this year's national championships with a lot of momentum after successfully crowning champions at all of our events in 2021,” said PGA of Canada president Teejay Alderdice. “We are so thankful to all of the venues that have stepped up this year to host events. We have an incredible group of courses across Canada and the US that will allow us to find five more worthy champions."

"In a historic year with the playing of the 100th BetRegal PGA Championship of Canada on deck, It is so incredible to have the support of both new and longtime sponsors. To Callaway Golf, BetRegal and G&G Brands, thank you for your continued support of our professionals. And to ORORO Heated Apparel and GOLFTEC, we are so excited to have you aboard and can't wait to show off our 2022 events."

Registration for the championships will open in the coming weeks. Contact PGA of Canada Championship Manager Matt Mueller via email at This email address is being protected from spambots. You need JavaScript enabled to view it. for more information.