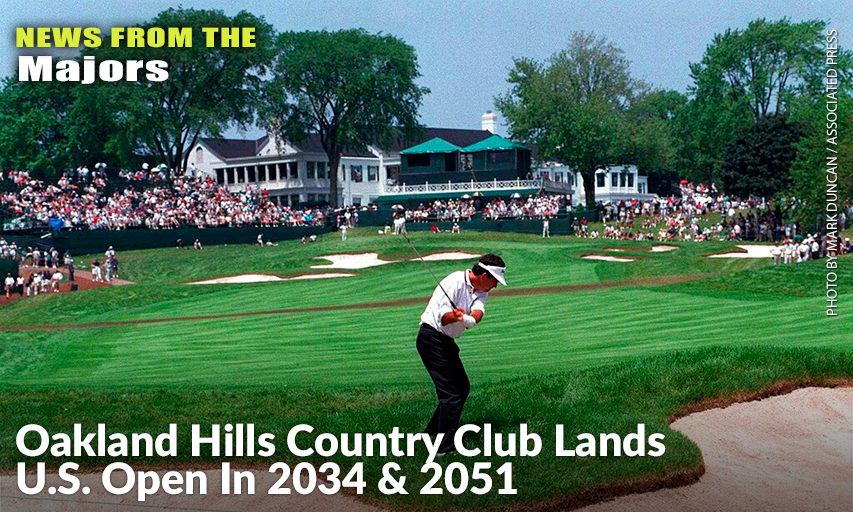 DETROIT, Michigan — Oakland Hills Country Club, reeling from a fire that destroyed its century-old clubhouse last month, has landed the U.S. Open in 2034 and 2051.

The USGA made the announcement at the Detroit Athletic Club. The governing body also said Oakmont Country Club in Pennsylvania, previously scheduled to have the U.S. Open in 2034, will host the major in 2033.

Oakland Hills has hosted six U.S. Opens and has been trying for years to attract a seventh, and first since 1996. The club has hosted a slew of other significant professional and amateur golf events, including three PGA Championships and the 2004 Ryder Cup.

When Ben Hogan won the U.S. Open in 1951 in suburban Detroit, he famously said he “brought this course, this monster” to its knees.

Two-time U.S. Open champion Andy North, who won his second U.S. Open in 1985 at Oakland Hills, said the golf course can safely be considered among the country's top 10 in historical significance.

“Before the new equipment, this was one of the hardest golf courses in the world,” North said. “It's one of the great courses, and it's fantastic that it's back in the U.S. Open rotation.”

Last year, the club completed a major renovation of its famed South Course that included adding length on some holes, moving fairway bunkers to put them in play for the pros and rebuilt each of its undulating greens.

“If we can get firm greens, I think we’ll have the best challenge possible,” golf course architect Gil Hanse said. “The putting greens are some of the finest anywhere. We’ve got a golf course that will be an appropriate challenge, even in this day and age.”

Flames ripped through the roof of Oakland Hill's sprawling, multi-story clubhouse on Feb. 17. It was built in 1922 and housed irreplaceable memorabilia and art, much of which was recovered, from nine major championships and the Ryder Cup.

Surveillance camera footage shows maintenance workers using a propane torch prior to a blaze that ravaged the clubhouse. The Oakland County Sheriff’s Office said Oakland Hills has estimated the loss of the clubhouse at about $80 million, a figure that Palmer said was not based on information from the club.

Sheriff Michael Bouchard said footage appears to show the workers attempting to douse a small fire in a wall using a garden hose. Bouchard said investigators could have a preliminary finding on the cause of the fire next month and didn't mention the possibility of criminal charges.

“All of us within the USGA were horrified to see what happened,” USGA chief championship officer John Bodenhamer said.

Oakland Hills is located in Bloomfield Township, Michigan, about 20 miles from Detroit. The USGA previously announced the club will host the U.S. Women’s Opens in 2031 and 2042 in a run of eight USGA championships from 2024 to 2051.

The club is focused on hosting the U.S. Junior Amateur in two years, when the new clubhouse likely won't be completed.

“We gave them the opportunity to defer the U.S. Junior Amateur and they said ‘No, we’re going to do this and it’s going to be amazing,’” Bodenhamer recalled.