Henrik Stenson To Be Ryder Cup Captain For Europe In Rome 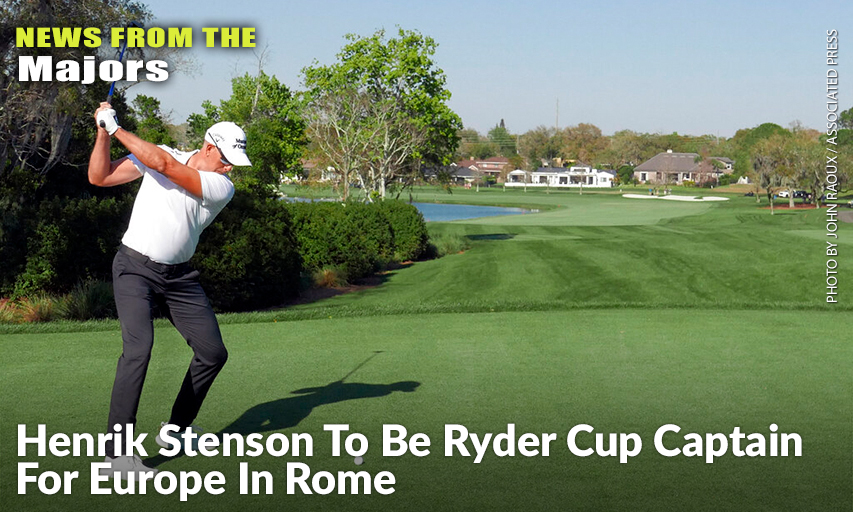 Henrik Stenson accepted the job as Ryder Cup captain on and pledged his allegiance to Europe and his attention to do everything possible to win back the gold trophy.

Stenson is the first Swede and the fifth player from continental Europe to be captain, chosen by a five-member panel that included three previous captains.

Europe has not lost on home soil since 1993.

The 2023 matches will be at Marco Simone in Italy, and Europe faces a tough task. The Americans are coming off the largest rout ever over Europe, 19-9 at Whistling Straits, behind a team that had youth, talent, hunger and a little attitude.

Zach Johnson will be the U.S. captain.

The announcement of Stenson came later than usual — six of the last seven European captains were introduced before the end of January — because of the lingering presence of a Saudi-funded rival league.

Stenson was among those tempted by guaranteed riches of a “Super Golf League” that Greg Norman is trying to put together, backed by Saudi Arabia's sovereign wealth fund. The status of such a league is unclear with the entire top 10 in the world having said they are staying put.

“There’s been a lot of speculation back and forth,” Stenson said. “And as I said, I am fully committed to the captaincy and to the Ryder Cup Europe and the job at hand. So we’re going to keep busy with that and I’m going to do everything in my power to deliver a winning team in Rome.”

Because of the threat to the European tour and the PGA TOUR, players who sign with a rival league were likely to abandon any participation in the Ryder Cup.

“I'm fully committed to my role as a captain and working hard toward the result we want in Rome,” Stenson said.

Luke Donald also was a candidate, with Robert Karlsson and Paul Lawrie other possibilities.

Stenson always was a logical choice. The 45-year-old Swede known as the “Ice Man” is a former British Open champion who was the first to win the FedEx Cup on the PGA TOUR and the Race to Dubai on the European tour in the same year.

He has played on five Ryder Cup teams and served as a vice captain under Padraig Harrington last September at Whistling Straits. It was an aging European team loaded with more experience than form — an average age of 34.5, with four players in their 40s.

“It's going to be an interesting 18 months,” Stenson said. "Time will tell exactly how the team will formalize. But we have got the old guard. We have got the experience, the players who played a lot of Ryder Cups. We have the new talent that are up-and-coming and have shown some great signs and want to continue to do that.

“The door is open for anyone with a European passport.”

Stenson was not alarmed by the beating in Whistling Straits before the most one-sided gallery, with Europeans facing severe travel restrictions because of the COVID-19 pandemic. He noted a strong U.S. team coming off a win at Hazeltine in 2016, and Europe won handily in France.

“I know my players are going to be up for a challenge,” he said.

Stenson is popular on both sides of the Atlantic, known for his dry wit, occasional pranks and top performance. He played his first Ryder Cup at The K Club in Ireland in 2006 and holed the cup-clinching putt in a European rout.

“He comes with all the credibility of what he has achieved, and as we all know a dry a sense of humor and a fantastic warm personality," said Guy Kinnings, the European Ryder Cup director. "But he is also a ferocious competitor. He is hugely respected by the players and admired by everyone involved with the game and the Ryder Cup.”