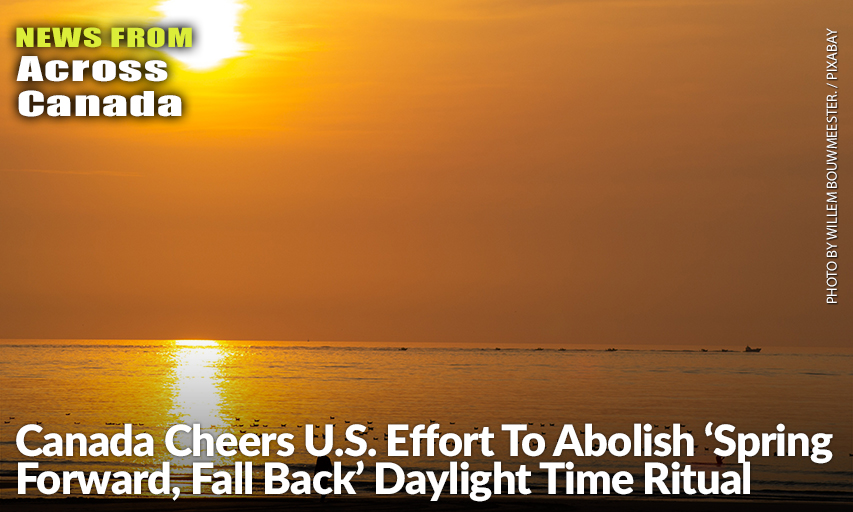 By JAMES McCARTEN, The Canadian Press

A giddy Democratic senator, clapping his hands and dancing with delight in the shadow of a sun-drenched U.S. Capitol, isn’t something one sees every day — especially in response to a Republican initiative.

But the prospect of doing away with the annoying, and arguably deadly, ritual of changing the clocks twice a year just seems to bring out the spirit of bipartisanship in some people, even when it’s in such short supply.

“We’re walking on sunshine,” a visibly thrilled Massachusetts Sen. Ed Markey said in a video posted to his Twitter account after the Senate unanimously approved legislation that would make daylight time permanent across the U.S.

It’s still a long way from becoming law; the House of Representatives still needs to pass it before President Joe Biden can sign off, and Speaker Nancy Pelosi has not yet said whether such a vote will take place.

But the rare show of unity in the Senate chamber, as well as the sorely needed dose of water-cooler whimsy that the subject of daylight time always generates, combined to capture the imaginations of lawmakers on both sides of the aisle, as well as a few north of the border as well.

“What we’ve got here is an issue that has tremendous popular support, because everybody deals with it twice a year, and no one can understand why we still do it,” said Jeremy Roberts, a Conservative member of the Ontario legislature who has advocated for years for permanent daylight time.

“But on the flip side, it has a whole bunch of actual academic support behind it as well. Between the two of those, I think that’s why it keeps generating such a buzz.”

Two years ago, Roberts spearheaded a new Ontario law that would see the province adopt daylight time permanently, provided New York state and the Quebec government both did the same. If the U.S. bill becomes law, that would take care of New York; Quebec Premier François Legault has publicly suggested he’s not opposed.

Multiple studies, including a 1999 effort by researchers at Stanford University and the Johns Hopkins University Sleep Disorders Center, have found links between changing the clocks and traffic accidents, heart attacks, workplace injuries and seasonal depression.

“Just this past weekend, we all went through that biannual ritual of changing the clock back and forth and the disruption that comes with it,” Republican Sen. Marco Rubio of Florida told the chamber after his bill, the Sunshine Protection Act, was passed by unanimous consent.

“One has to ask themselves after a while: Why do we keep doing it? Why are we doing this?”

Built into Rubio’s bill is a one-year delay, meaning if it became law, the U.S. would face one more year of falling back and springing forward before doing away with the practice permanently in 2023. That’s to allow companies and industries with long timelines to have a chance to adjust, he said.

Rubio acknowledged in his speech that while it “is not the most important issue confronting America,” it’s one that generates a lot of bipartisan agreement, which is why he’s confident it will both pass the House and receive the president’s signature.

Indeed, it’s one of those issues that is at once frivolous and serious for anyone familiar with the ritual.

“I was trying to think of a joke; I couldn’t think of one,” White House press secretary Jen Psaki said when asked whether Biden has taken a position on either side of the clock. “We obviously work closely with Congress on all legislation they consider, but I don’t have a specific position from the administration at this point in time.”

Gamely, she added of the president: “He is more of an evening person.”

Not everyone is chuckling, however: Mississippi Republican Sen. Roger Wicker told Politico that while he decided not to stand in the way, he’s concerned about the impact of an extra hour of morning darkness.

“There’s kids in Minnesota and Nebraska and Montana that are going to catch the school bus in the pitch dark, and I worry about that,” Wicker said. “We’ll see … I hope it works out wonderfully.”

British Columbia, too, went so far as to pass its own law in 2019, codifying the abolishment of standard time as soon as the U.S. makes it official.

“For B.C. families who have just had to cope with the disruptions of changing the clocks, the U.S. Senate bill … brings us another step toward ending the time changes in our province for good,” the office of B.C. Premier John Horgan said in a statement.

The province introduced and passed its own legislation after a whopping 93 per cent of people surveyed by the province expressed support for the idea, so long as they kept their clocks synchronized with Washington, Oregon and California.

“While the bill still requires congressional approval before it can go to President Biden to sign, we’re well positioned in B.C. to do away with the time changes once and for all and move to permanent (daylight time).”

Most of the rest of Canada — Saskatchewan hasn’t changed its clocks in more than 100 years, with the exception of Lloydminster, which straddles the boundary with Alberta — will likely have no choice but to follow suit, said Liberal MP Anthony Housefather.

“If adopted by the House, this will apply across the U.S. and Canada needs to be in step,” Housefather tweeted. “The federal government needs to work with the provinces and co-ordinate this across the country.”

Rubio’s rhetoric in the chamber Tuesday made it clear what he thinks of the practice.

“If we can get this passed, we don’t have to keep doing this stupidity anymore,” he said. “Pardon the pun, but this is an idea whose time has come.”