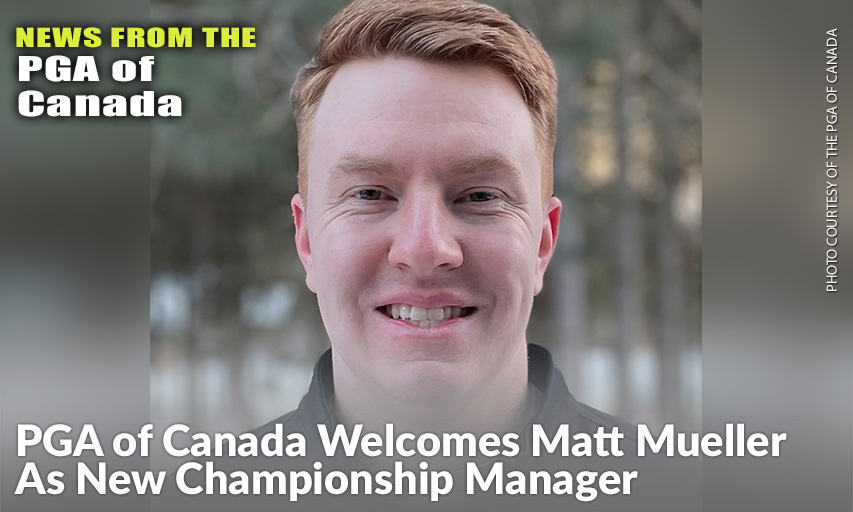 The PGA of Canada is excited to announce that Matt Mueller has been named the organization’s new Championship Manager, and will oversee the association’s championships, including the 100th playing of the BetRegal PGA Championship of Canada this June at Beacon Hall Golf Club.

“I’m pleased to be joining the PGA of Canada team and leading the organization’s National Championships,” said Mueller. “It is an exciting year for the organization with the 100th BetRegal PGA Championship of Canada on the schedule, and I am thrilled to have the opportunity to direct this historic event.

Bringing with him a wealth of knowledge about the Canadian golf industry, Mueller spent the past three years working with Golf Canada prior to accepting the Championship Manager role with the PGA of Canada. In addition, Mueller has spent time working with the Toronto Blue Jays, CJGA, MLSE, and the Sudbury Wolves, and spent four years as a volunteer at the Ontario Championship on the PGA TOUR Canada schedule.

“I want to thank Golf Canada, and the extraordinary team that I had the chance to work with, for the opportunities that I have had the past three years,” said Mueller. “I am thrilled to begin this next chapter with the PGA of Canada.”

Mueller, who has a Bachelor of Commerce Degree majoring in Sports Administration from Laurentian University, has a Level Three National Rules Certification and is also certified in the World Handicap System. The PGA of Canada’s newest hire will be tasked with overseeing the PGA of Canada’s five national championships and helping support the ever-growing RBC PGA Scramble.