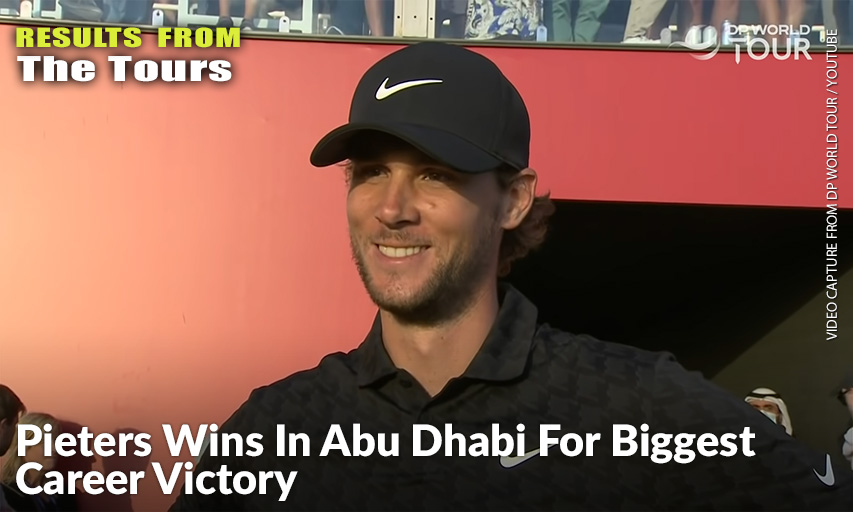 ABU DHABI, United Arab Emirates (AP) — Thomas Pieters claimed the sixth and biggest European tour title of his career by winning the Abu Dhabi Championship by one shot after a turbulent final round.

The Belgian, who turns 30 next week, shot an even par 72 in the final round for a total of 278 to edge Rafa Cabrera Bello and Shubhankar Sharma in joint second.

Viktor Hovland (72) fell short in his bid for a third victory in his last four events and finished in joint fourth place with Victor Dubuisson (69), two shots back.

Scott Jamieson, who was bidding for a wire-to-wire victory after leading at the end of each of the first three rounds, tumbled to joint 10th place after shooting a final-round 77.

“I’m happy I can finally get my caddy, Adam, a gold bib (for winning a Rolex Series event),” said Pieters, who finished with a final-round 72.

“I chickened out on the last. I was gong to go for it but I was told I was two ahead so I decided to lay up and I made a (par) five which was fine.”

Rory McIlroy will be pondering what might have been after he moved to within two of the lead, courtesy of a superb 141-yard eagle on the par-four ninth and a birdie on 13.

But his round fell apart with three bogeys in the final five holes and he eventually ended up with a 3-under 69 in a tie for 12th.

“Honestly, I am just happy that I got to play an extra two days,” said McIlroy. “I had to make a birdie on the last hole on Friday night just to be here, and I almost made the most of the weekend.

“I played well yesterday, and really well today through 13, and then a couple of loose shots coming in cost me. It wasn’t the finish I wanted, but big-picture wise it was good to play another 36 holes and assess where everything is and know what to work on.”

Jamieson led after every round at Yas Links, setting the pace with a brilliant opening 63 and staying ahead with a 74 before heading into the final round with a one-shot advantage over Pieters after a 68.

But the 38-year-old, whose sole sole tour triumph came nine years ago over 36 weather-affected holes and a modified layout at the Nelson Mandela Championship, was unable to recover from a poor start, which included four bogeys in the first five holes.

Former Open champion Shane Lowry was one shot behind Jamieson following [third-round] play, but he too endured a final round to forget that started with a triple-bogey seven on the opening hole. He ended the day with a 5-over 77.