McIlroy To Take Aspects Of Woods’ Game To Improve In 2022 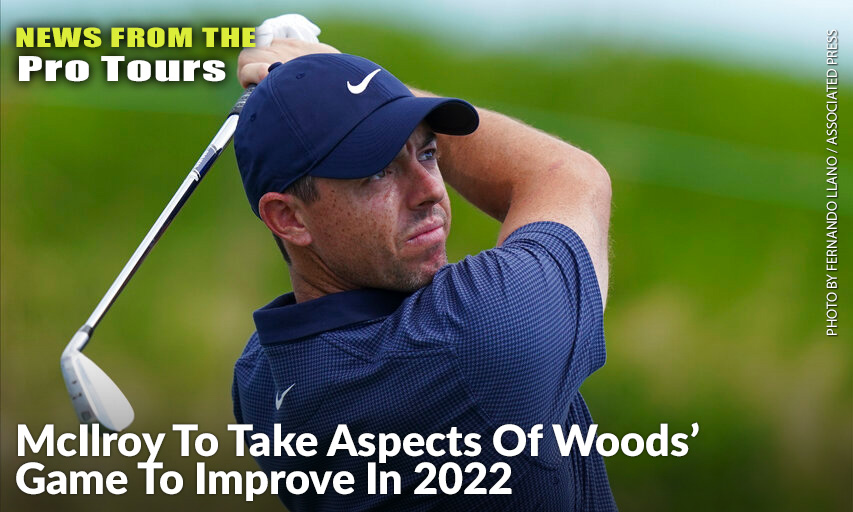 Rory McIlroy made it something of a ritual to write his goals for the season on the back of his boarding pass on the flight to the Middle East for his first tournament of the year.

Gone, though, are the days when he might jot down the name and number of tournaments he wanted to win.

For McIlroy, it’s now about smaller objectives that are more in his control. And to see the bigger picture, he’s used the player he has called his hero growing up, Tiger Woods, as a benchmark.

“Not saying that my game compares to his in any way,” McIlroy said of Woods, who he now regards as a close friend, “but there are certainly aspects of what he did so well in the past that I would obviously love to put into my game.”

To that end, McIlroy thinks he needs to be “more of a measured and a controlled golfer.”

So, heading into his opening event of 2022 at the Abu Dhabi Championship, expect to see the four-time major champion be less aggressive off the tee, even if that potentially robs him of one of his best attributes — his driving distance.

“I’ll certainly pick and choose my spots where I can take advantage of the driver and hit it, but the best player of the last 30 years, Tiger, he picked and chose where he hit driver, and he played a very, very controlled game,” McIlroy said. “It didn’t work out too badly for him.”

McIlroy had the second longest average drive on the PGA TOUR in 2021 — behind Bryson DeChambeau — but was below the average for fairways hit, tied in 145th place out of about 200 players.

His driving will certainly be tested at the Yas Links, with the fairways tight and the wind expected to pick up heading into the weekend.

For McIlroy and every other player, it will be a new experience with the tournament — a Rolex Series event and one of the most prestigious on the European tour — having been staged at the nearby Abu Dhabi Golf Club until this year.

The Northern Irishman had a solid record there — four runner-up finishes and four more top-three finishes in his 11 appearances — without ever getting over the line. Last year, he led after 54 holes only to shoot a final-round 72 and finish five strokes behind winner Tyrrell Hatton.

“Maybe this is what’s needed to end up winning this thing at the end, a change of golf course,” he said. “It always been a great place to start the year for me. I’ve always played pretty well and hopefully I can continue that trend.”

Hatton, an Englishman ranked No. 22, is back to defend his title but said he has been struggling to get motivated to practice.

“I’m not really that focussed whilst I’m there. It can be a little bit of a waste of time,” Hatton said. “Going through the motions of almost what I do when I warm up before I go and play, just kind of go through every other club in the bag and that’s kind of me done on the range. Generally that’s how I’ve been for a long time.”