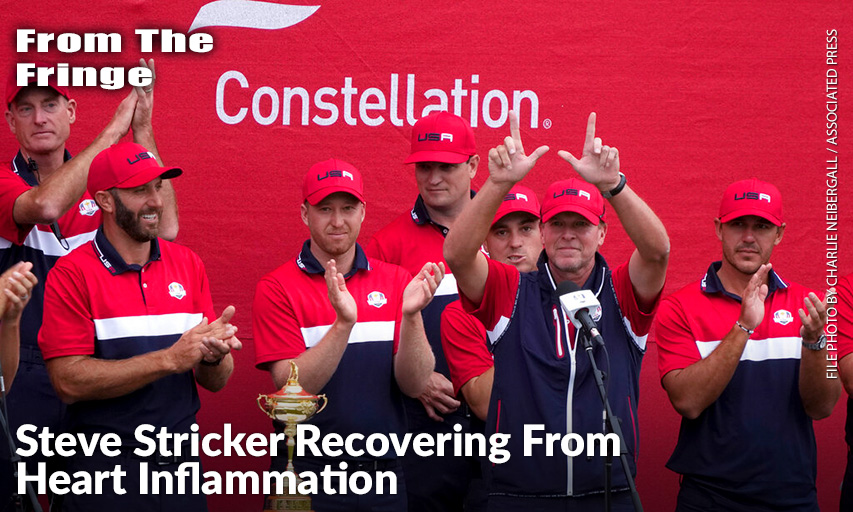 MADISON, Wisconsin (AP) — Ryder Cup captain Steve Stricker is recovering from a health scare that featured a soaring white blood cell count and inflammation around his heart, which hospitalized him for two weeks and caused him to lose 25 pounds.

“I’m lucky,” Stricker told Wisconsin.Golf in a lengthy interview. “I’m feeling like things are going in the right direction. I’ve just got to give it time.”

Stricker said his heart was jumping in and out of rhythm from Thanksgiving to Christmas Eve. He said the inflammation is starting to abate and he’s able to start moving around. The Wisconsin native was cleared to take his family to Florida for the winter at the start of the week.

Even so, he said his cardiologist told him it could be six months before he competes again.

It was a rough conclusion to what otherwise was the best memory of his career. In a Ryder Cup delayed one year by the pandemic, Stricker led a U.S. team to the biggest rout over Europe, 19-9, at Whistling Straits before a home crowd in Wisconsin.

Stricker said for him, it was like winning a major. A month later came a major scare.

It started with a sore throat and a cough. Stricker said a COVID-19 test came back negative, a few weeks later he felt well enough to go deer hunting.

“I came home from hunting one night and I was like, ‘I don’t feel good. My side hurts. I just don’t feel right,’” he said. “That night I had the sweats and all of a sudden, my temperature was 103.”

He went back to his doctor for a strong antibiotic and thinks he had a reaction, for his throat began to close and his lips, glands and tongue began to swell.

He was hospitalized about two weeks before Thanksgiving, and that’s when his health took a nasty turn.

“My liver numbers started getting worse. My white blood cell count was jacked up really high. I was fighting something, but they couldn’t find out what it was,” he said.

He said he had jaundice and his urine was the color of cola. Four days into his hospital stay, his heart started fluttering. Stricker said at one point his heart rate was 160 beats per minute for two hours.

He was released the day before Thanksgiving, and then readmitted three days later feeling worse that before.

“A couple of times I was like, ‘What is going on?’” Stricker said. “Everything is going the wrong way. It wasn’t fun. You don’t know what’s happening. You don’t know where this road is leading to. I never thought that I’m not getting out of there kind of thing. But I didn’t eat for two weeks. I didn’t have any energy or appetite to eat. I had a hard time just getting up and walking because of the heart. I took a few steps to the bathroom in my room and I’d be out of breath.

“I was pretty sick, from what they tell me.”

Stricker said blood tests indicate the inflammation around his heart is coming down. He is able to walk short distances, but still not eating solid food.

Stricker can only wonder how much the Ryder Cup took out of him. He devoted nearly three years to the job because of the one-year delay brought on by the pandemic. He had the pressure and distraction of delivering for a Wisconsin crowd. It was a smashing success.

“I kind of have a feeling that could have had a part in it,” he said. “It’s a letdown, right, after that happens? And then your immune system is probably down. It probably played a role in it somehow.”