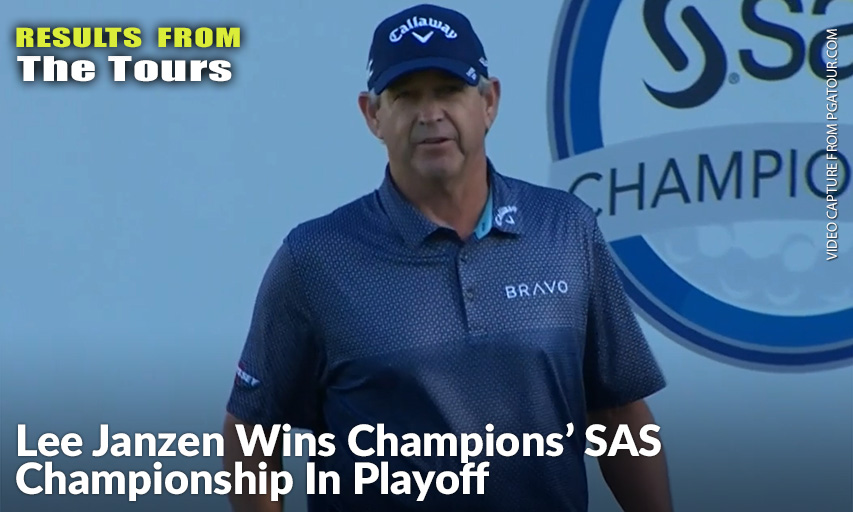 CARY, North Carolina (AP) — Lee Janzen made a 20-foot birdie putt on the first hole of a playoff with Miguel Angel Jimenez to win the PGA TOUR Champions’ SAS Championship.

“Crazy. I just need to get through this so I can have a moment to myself soon,” Janzen said. “When you get in the heat of a tournament, it’s emotional. Everything gets amped up.”

The 57-year-old Janzen also birdied the par-4 18th in regulation, holing a putt from the fringe, in a closing 5-under 67 in the regular-season finale.

“To make those two putts I made on 18, ridiculous,” Janzen said. “If you’re having a putting match for nothing and you’re completely calm, it’s hard to make those putts, but with the tournament on the line, it’s even harder.”

The two-time U.S. Open champion won the 2015 ACE Group Classic for his only other senior title.

Jimenez finished with a 69 to match Janzen at 12-under 204 at Prestonwood Country Club. The 57-year-old Spanish player has 10 senior victories. He hit his approach over the green in the playoff and chipped to a foot before Janzen rolled in the winner.

The top 72 players on the money list advanced to the playoffs, with Monday qualifier Jaidee jumping from 82nd to 72nd. Davis Love III tied for 20th to go from 75th to 71st.