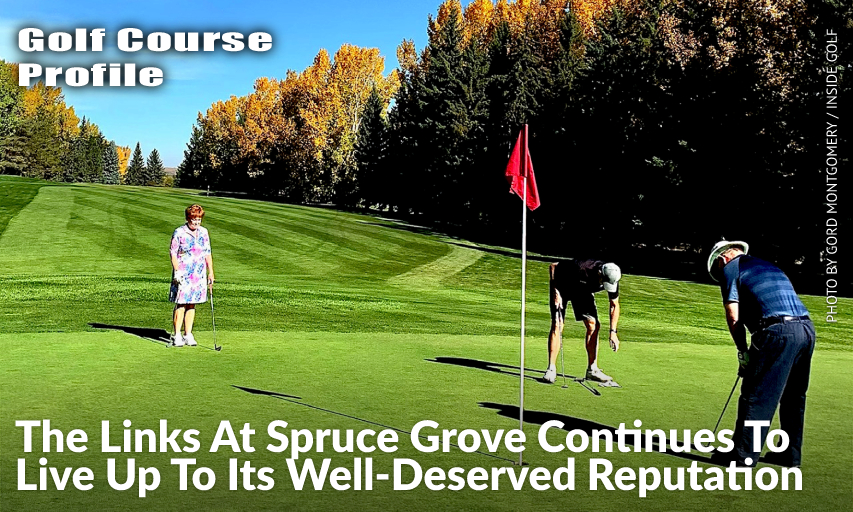 SPRUCE GROVE, Alberta — Long considered as one of the top public golf courses in the greater-Edmonton area, The Links at Spruce Grove has done nothing to dispel that reputation since it opened in the early 1980s. In fact, it may be getting even better as it grows older.

While many golfers shied away from this 18-hole layout early on because of the fear of whack-ing a shot, or two, into the surrounding residential neighbourhoods, the old growth fir trees that line the majority of the fairways here have largely taken that fear out of play. Of course, you still need to hit good shots to score well here - and stay out of those trees - but the occasional side-ways missile now tends to find tree bark well before ever finding its way off the property.

That’s a sentiment shared by the course’s head professional Veeraphon (Vee for simplicity’s sake) Thephasouvanh. He noted that the course looks tight, and can play that way if you try to overpower it, as evidenced by a round this summer by one of Alberta’s best playing profession-als, Wes Heffernan, who used brains over brawn to take his opposition, as well as par, down.

Heffernan, from Calgary, won a recent PGA of Alberta tournament at The Links by carding a superb 7-under par 65. “He told me he only hit driver three times that day,” said Vee, pointing to the fact shorter and straighter there can be better than long and crooked. Vee continued by ex-plaining he feels this is a “thinking course,” as much as anything. “It’s fairly tight and the greens are a little tough to read sometimes. There like turtle backs that slope off to the sides,” meaning putts need to be studied carefully before the trigger’s pulled. And the fact the greens are now rolled on a regular basis means they can be deceivingly quick.

In what keeps his track on the radar of all area golfers, Vee noted, “I think it has something to do with the value. You get a good bang for your buck.”

From The Front Deck

While the layout here hasn’t changed over the years, the yardages have to a degree. Where it was originally a grind for anyone hitting off the front tees, that has now become a less demand-ing task. In fact, a playing partner who prefers playing from up front told me, “It’s a lot less intim-idating now than it used to be. It’s not so long and demanding now.”

The Red blocks here originally sat where the White tees now reside. That switch a few years back means from the front porch there is almost 1,000 yards less turf to manoeuvre over which means less stress and strain, and more fun for the shorter hitters.

Even still, the one place where the Red tees don’t get a big jump is on the par-3 holes. In total, of the four that are on the scorecard, there is only a difference of about 70 yards. That means the other shortened distances come from some of the larger holes par 4 and par 5 holes here, where distances between the original teeing spot and what’s used now for the front deck, can be up to 100 yards.

“When we opened in the eighties, we were long by those standards,” Vee said about the addition of the newer boxes on the course. “Now, we’re not short but we also aren’t long by any means.”

From The Other Tees

If you dare to challenge this track from the back Gold tees, it’s a trek of 6,800 yards. That yard-age drops to 6.400 from the Blue tee and 6,078 from the White. There are also combo tees here that can be played to suit one’s abilities and handicap. As mentioned previously about the tree-lined fairways, the further back you go to hit your opening volley, the narrower the landing areas look, thus the comment from Heffernan about this being a tight course.

For the average golfer though, The Links at Spruce Grove sets up very well, Vee continued.

“You find a yardage that works for you and that makes the course more playable,” he said, add-ing that the reputation of being overly tight isn’t necessarily true if you start from the right posi-tion. “Yeah. I keep saying it’s tight but it’s tree lined. If you find yourself off the fairway a bit, you’re going to be chipping out,” more often than not so at this course, be sure to bring your thinking cap as well as you’re straight shooter hat to enjoy one of the finest golf properties in the Edmonton area.