Durant Holds Off Langer In The Ally Challenge 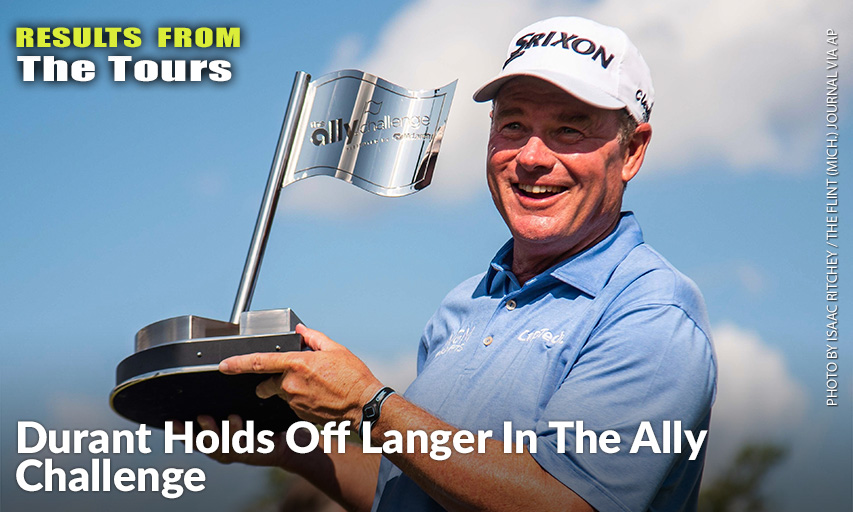 GRAND BLANC, Michigan (AP) — Joe Durant made a 5-foot bogey putt on the par-4 18th for a one-stroke victory over Bernhard Langer in The Ally Challenge.

The 57-year-old Durant closed with a 4-under 68 to finish at 17-under 199 at Warwick Hills. He won for the fourth time on the PGA TOUR Champions after winning four times on the PGA TOUR.

“I’ve got to give thanks to one of my best friends at home, Steve Fell, who’s a golf coach, my son’s golf coach, and Ray Schuessler and Brad Faxon,” Durant said. “They’ve all been trying to help me with my putting because I’ve been putting so poorly and those three guys have really just made some changes in my mind that helped me a lot this week. I putted beautifully and just fortunate to hang on by one.”

A stroke behind Langer and Doug Barron entering the round, Durant had four birdies in a six-hole stretch on the front nine and added a birdie on the par-5 16th. He drove left on 18 into an adjacent fairway, clipped a branch hitting over the trees, left his third short of the green and chipped past.

“I haven’t been in that position in quite a while and I had a lot of things in my brain that shouldn’t have been in my brain,” Durant said. "I’m a good driver of the ball, too, but I just stepped up there and I didn’t have a clear picture of the shot I wanted to hit and I just completely flared it.

Langer parred the 18th, hitting into two bunkers, in a 70. Two days after shooting his age on his 64th birthday, the German star had just one back-nine birdie — matching Durant on the 16th. Langer has 41 Champions victories, four off Hale Irwin’s record.

“It’s been a very memorable week with 64 on my 64th birthday. I’ll never forget that,” Langer said. “And playing really good, solid golf for the most part. Followed up the 64 with a 66 and today was a lot tougher. The wind was up, course played longer with all the rain we had last night, the pins were tough and I just didn’t make a lot of putts today. That’s why I shot 70, but it was still a good score.”

“I hit a good drive,” Singh said. “I waited for a long time to hit my second, hit a 5-wood right at it, pitched to 50 and rolled right into the hole. Voila!”

A three-time winner of the PGA TOUR’s Buick Open at Warwick Hills, Singh tied for seventh with Stephen Leaney (68) at 13 under.