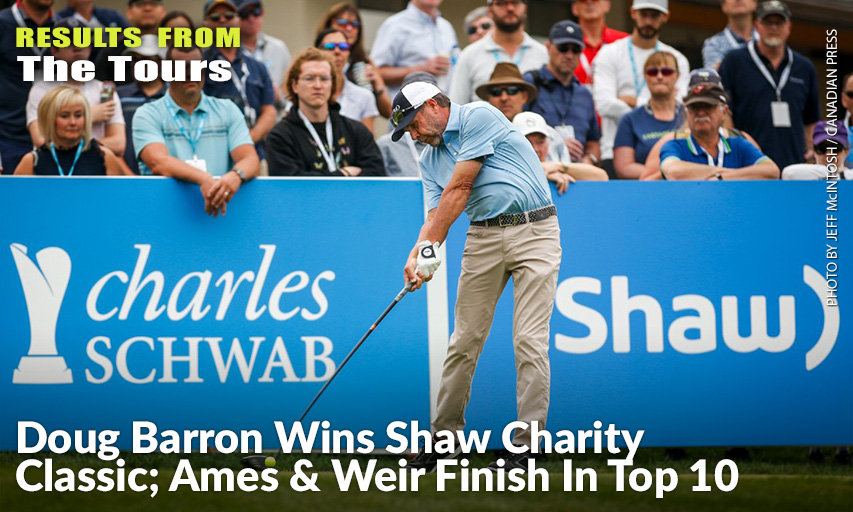 After lagging his eagle putt to within tap-in range on the par 5 finishing hole of Canyon Meadows Golf and Country Club, Barron threw his arms in the air and started to celebrate his victory at the 2021 Shaw Charity Classic.

“I felt kind of bad because I got a little excited,” said Barron, who apologized to playing partner Steve Flesch for his premature celebrations. “He’s my friend. I would never want to disrespect another player. When you win out here, it’s so few and far between.”

Shortly after draining his short birdie putt, Barron chest bumped his caddie Christopher Shepherd and then did a victory lap around the final green while fist bumping many of the fans in attendance.

“He’s an emotional guy and you can see that,” said Flesch, who made par on the final hole to finish in second place. “And that’s great because sometimes I think we need more emotion in our game ? but if I won like that, I might have run around like a wild man, too.”

Although Barron bogeyed his first hole of the day, he went on to record five birdies and an eagle on the par-5 11th hole to card his third straight round of 6-under 64.

His 54-hole score of 18-under 192 gave the 52-year-old golfer from Memphis, Tenn., just his second-ever PGA TOUR Champions victory. His last one was at the 2019 Dick’s Sporting Goods Open in Endicott, N.Y.

“Well, when I play, I never think about money,” Barron said. “My wife gets to spend all that, that’s good. Unfortunately there’s only one winner every week and we don’t get to do it very often, so when you do it, you should enjoy it.”

Thanks to three birdies on the front nine and three more in his first four holes on the back side, Flesch of Union, Ky., was in the lead until Barron rallied for the win. Flesch’s round of 5-under 65 was good enough for second as he finished the tournament at 16 under.

“My goal was to make four birdies on the back nine,” said Flesch, who finished in third at the 2019 Shaw Charity Classic. “I made three kind of real quickly and I made a nice par save on 12. I knew I probably needed to make another birdie on one of the last three and I didn’t. And man, all credit to Doug for his finish.”

Billy Andrade and Brandt Jobe ended up in a tie for third place at 13 under, while Billy Mayfair finished one shot back of them alone in fifth.

Canadian Golf Hall of Fame member Stephen Ames of Calgary carded a round of even -par 70 to finish in a tie for sixth at 11 under with David McKenzie.

“Everything about it was great except the fact that we only had 2,000 people watching unfortunately,” Ames said. “I think everybody’s more or less waiting for this COVID thing to get over with and we’ll get back to normal next year, which will be awesome.”

One day after shooting an even-par round of 70, Mike Weir of Brights Grove, Ont., improved that score by two shots on Sunday to finish in a four-way tie for ninth at 9 under.

“It was a nice test of golf,” Weir said. “I found it difficult on the greens, especially on the weekend. I got stuck in neutral the last two days here, but I love the place and Shaw and Suncor did an amazing job, so it was good to be back up north.”

Also in that group with Weir were Matt Gogel, Tim Herron and Ken Duke.

David Morland IV from Aurora, Ont., shot 69 on Sunday to finish in a six-way tie at 7 under.

Meanwhile Dennis Hendershott of Brantford, Ont., had four birdies and four bogeys on his round to finish both his day and the tournament at even par. That left him well back of the leaders in a three-way tie for 47th.