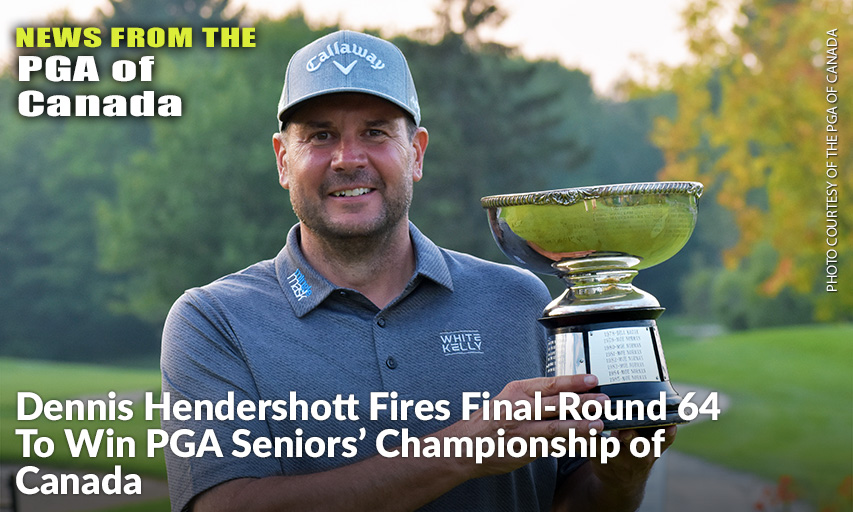 By BRENDAN STASIEWICH, PGA of Canada

BROMONT, Quebec — Entering the day four-strokes off the lead, Dennis Hendershott knew that it was going to take something special in order to raise the Albert Murray trophy at the end of the PGA Seniors’ Championship of Canada late on Friday.

Well, for Hendershott, something special did happen, and it came in the form of a final-round 64 to beat Danny King by a single stroke at Parcours de Vieux Village in Bromont, Quebec.

The full leaderboard can be viewed here.

“It hasn’t settled in yet, but I’m so excited,” said the 52-year-old from Paris, Ontario. “I came into this week lacking some confidence as of late. I haven’t been scoring well in some recent Champions Tour qualifiers and last week’s Mackenzie Tour event. I texted my wife last week wondering if I should even play this week, I wasn’t really confident, even though I’ve been putting in so much work, golf is a funny game.”

Hendershott struck early and often on Friday, beginning his day four under in his opening five holes after making an eagle on the fifth. Despite a bogey at the ninth, Hendershott cruised to open the back nine with five pars before making four-consecutive birdies to end the day on top.

Hendershott wins $9000 for his efforts this week and his name joins the likes of Jim Rutledge, Dave Barr, Al Balding, and Moe Norman on the historic Albert Murray trophy.

“I had in my mind if I could get it to 8-under through the turn that could put a little pressure on,” said Hendershott, who is in fine form as he prepares to play in the Champions Tour’s Shaw Charity Classic next week at Canyon Meadows Golf and Country Club in Calgary, AB. “Even if they got to 10 or 11-under, they would take notice that I was coming.”

Though Rutledge shot 74 on Friday, his 68-69 efforts during the first two rounds gave him the Super Senior crown for the first time (though, he has six Senior PGA Championships to his name in the regular 50+ division. 60+-aged players qualify for the Super Senior division).