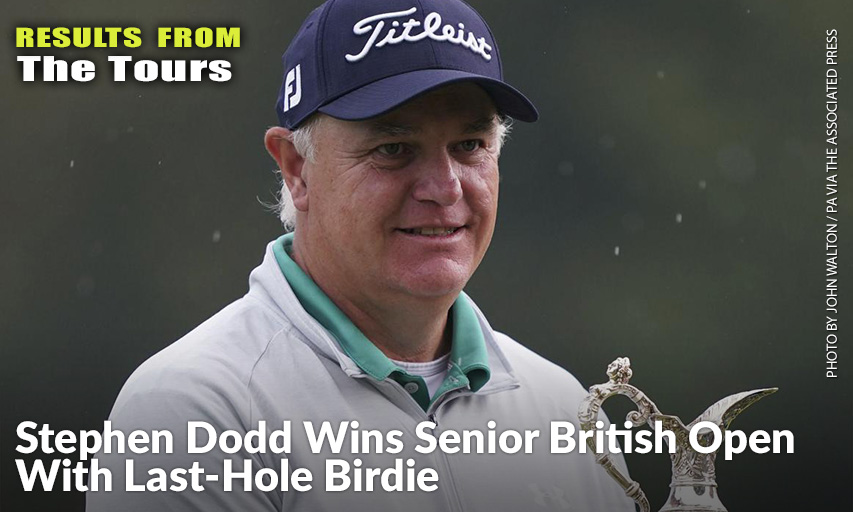 The 55-year-old Welshman closed with a 2-under 68 at Sunningdale for a four-day total of 13-under 267. He hit his approach from the right rough to about 10 feet on the par-4 18th and holed the putt to win the trophy and a spot in next year's British Open at St. Andrews.

“This could be the only chance I get to win, so tried my best to hole it,” Dodd said. “Thankfully for me it went in, so it was a nice way to finish for me.”

Dodd equaled the low round in the history of the tournament [in the third round] with an 8-under 62 that gave him a two-shot lead heading into the final round of the last senior major championship of the year.

He had only played one tournament in the past 18 months.

“Expectation-wise, I didn’t really have any expectations, because as I said, I played so little competitive golf that I just wanted to play well and just do myself a bit of justice,” Dodd said, “and I think I’ve done a bit more than that, luckily.”

Defending champion Bernhard Langer (68) was fourth, another two shots back. The 63-year-old Langer won in 2019 at Royal Lytham & St. Annes for his fourth victory in the event. Last year's tournament was canceled because of the coronavirus pandemic.

A three-time European Tour winner, Dodd made his senior debut at the Senior British Open in 2016, when he had his previously best finish at the event — a share of 14th place.

He didn't realize until after he won that he'd earned the exemption to play at St. Andrews.

“That will be special,” he said. “I'll have to start trying to hit it a bit harder and further.”