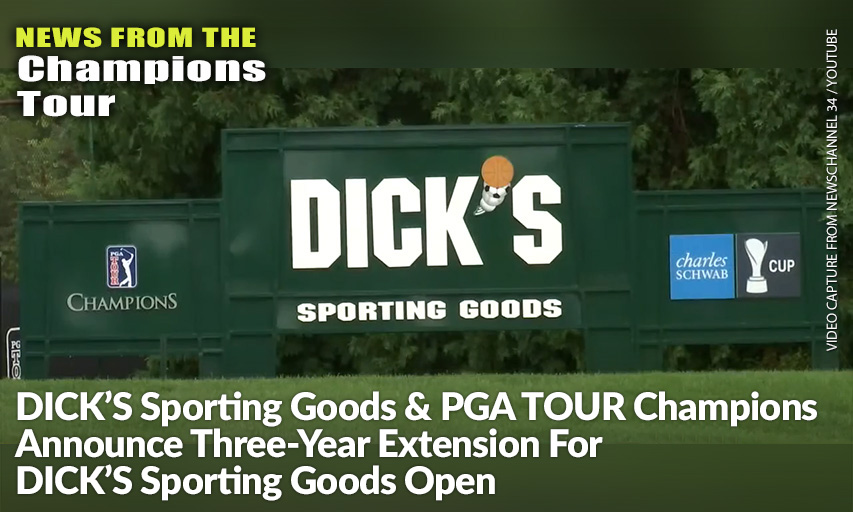 “We are excited to announce the three-year extension and continue our incredible partnership with DICK’S Sporting Goods,” said PGA TOUR Champions President Miller Brady. “Broome County has been an exceptional host of professional golf for half a century, and at this year’s DICK'S Sporting Goods Open, we’re thrilled to celebrate the tournament’s historic run at En-Joie Golf Club. This tournament is a perpetual player-favorite because of the outstanding fan support and warm welcome from the community. I’m confident that it will continue to be a premier event on the annual PGA TOUR Champions calendar.”

The DICK’S Sporting Goods Open is operated by Broome County Community Charities, Inc. (BCCC) and has donated over $18 million back to charity. BCCC has been the sponsoring organization of professional golf in Central New York for over 43 years. Established in 1973, Broome Charities’ initial mission focused the 501(c)(3)’s funding toward health care related organizations with the intent to assist the greatest number of people within their community. Both the UHS Foundation and Lourdes Hospital Foundation have been primary recipients of annual donations made by Broome County Community Charities, Inc. These contributions are a result of partnerships with DICK’S Sporting Goods, the PGA TOUR and PGA TOUR Champions players.

DICK’S Sporting Goods has deep roots in Binghamton and upstate New York. DICK’S opened its first store in Binghamton in 1948. The company also opened its 500th store, its newest distribution center and its brand-new concept, House of Sport, in New York locations.

“No matter how much we grow, Binghamton is home and we’re thrilled to continue this partnership with PGA TOUR Champions and bring this event to Broome County,” said Ed Stack, DICK’S Sporting Goods Executive Chairman. “This is always a great opportunity to come together as a community and celebrate what is special about this area and to enjoy the exciting and dynamic game of golf. We are looking forward to this year’s tournament and welcoming the players and community back to the DICK’s Sporting Goods Open for years to come.”

Thanks to its incredible fan support, the DICK’S Sporting Goods Open continues to be the largest professional sporting event in Central New York.

In 1974, Broome County native Richie Karl made history when he won the B.C. Open while working as a club pro at En-Joie Golf Course — a feat that hasn’t been accomplished on the PGA TOUR since. The now 76-year-old lived on the 10ᵗʰ fairway at En-Joie for many years and received a sponsor exemption to play in the 2007 inaugural DICK’S Sporting Goods Open. At this year’s tournament, Karl will hit the ceremonial tee shot prior to Friday’s first round.

New York native Claude “Butch” Harmon, Jr. won the inaugural Broome County Open in 1971, when it was a one-round satellite tournament. The son of 1948 Masters champion Claude Harmon, Sr., Butch would go on to serve as coach to a number of golf’s greatest champions, including Tiger Woods from 1993 to 2004 and Phil Mickelson from 2007 to 2015.