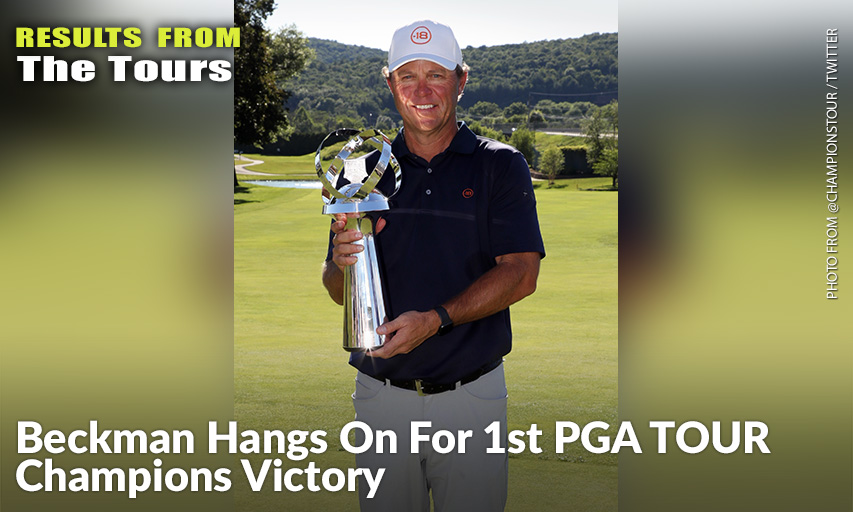 ENDICOTT, New York (AP) — Cameron Beckman ran off five straight birdies to start the back nine and then held on at the end for a 4-under 68 and a one-shot victory over Ernie Els in the Dick's Sporting Goods Open, his first title on the PGA TOUR Champions.

“This feels great,” Beckman said. “I had so much fun. Getting to play with Ernie and Darren Clarke, how much fun can I have?"

Els, who started the final round with a three-shot lead, closed with a 72 to finish second.

Beckman capped off his five straight birdies with a 50-foot putt across the 14th green, and with Els making a pair of bogeys, Beckman suddenly had a four-shot lead with four holes to play.

Then it was a matter of holding on.

The Minnesota native took bogey on No. 15. Els drove the green on the par-4 16h hole, his tee shot with a driver pitching 3 feet behind the hole, and he missed the 15-foot eagle putt. Beckman failed to get up-and-down for birdie and the lead was down to two.

Els caught the left lip with a 15-foot birdie attempt on the par-3 17th, while Beckman missed the green to the left, chipped to 8 feet and calmly rolled it in.

Staked to a two-shot lead playing the final hole at En-Joie Golf Club, Beckman pulled his drive to the left and into the water. He took a penalty drop and hit his third shot to 20 feet.

Els had 92 yards for his second shot, but left it some 25 feet short and was well short with his birdie putt.

“The only thing disappointing is my second shot on 18,” Els said. “I hit is so far short, and I leave the putt short. ... It's going to sting a bit. I think I might need to have a couple of beers tonight.”

Beckman lagged his par putt to a few inches, marked the ball to let Els finish, and turned and clenched his fist. It was the first time he showed any emotion.

Beckman finished at 12-under 204. He had only two top 10s in his rookie season, which dates to 2020 because of the pandemic, and spent time with his sister, who is a mental coach.

“I needed some help, let's put it that way,” Beckman said with a smile.