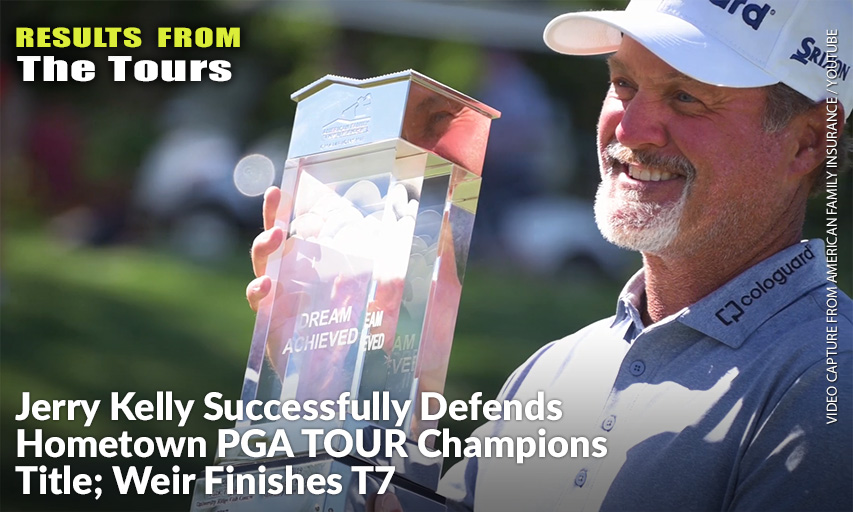 MADISON, Wisconsin (AP) — Jerry Kelly successfully defended his title in his hometown American Insurance Championship, closing with a 6-under 66 for a one-stroke victory over Fred Couples and Miguel Angel Jimenez.

The 54-year-old Kelly finished at 14-under 202 at University Ridge for his eighth PGA TOUR Champions victory.

“Can’t get any better than this,” Kelly said. “After doubling the 18th hole [in the third round] and bogeying the first hole, I was reeling a little bit. ... It means so much for me to win around here, and now twice, I’m over the moon.”

“Hit a good shot. 18, I’ve been there before, I don’t mind driving it over there,” Couples said. “Then I chose to be long coming back this way. I knew I wasn’t going to get it close and it just came out hot and rolled through the green. I thought I was putting and then chipped it strong and pushed the putt and that was it.”

Jimenez, the leader after each of the first two rounds, shot a 69.

Tournament host Steve Stricker tied for seventh at 9 under after a 65. The U.S. Ryder Cup captain, like Kelly, grew up and lives in Madison.

Hall of Fame pitcher John Smoltz was 79th among the 80 finishers, shooting a 74 to get to 16 over.

Canadian Mike Weir shot a 7-under 65 to finish in a tie for seventh. Fellow Canadian Stephen Ames finished tied for 55th.