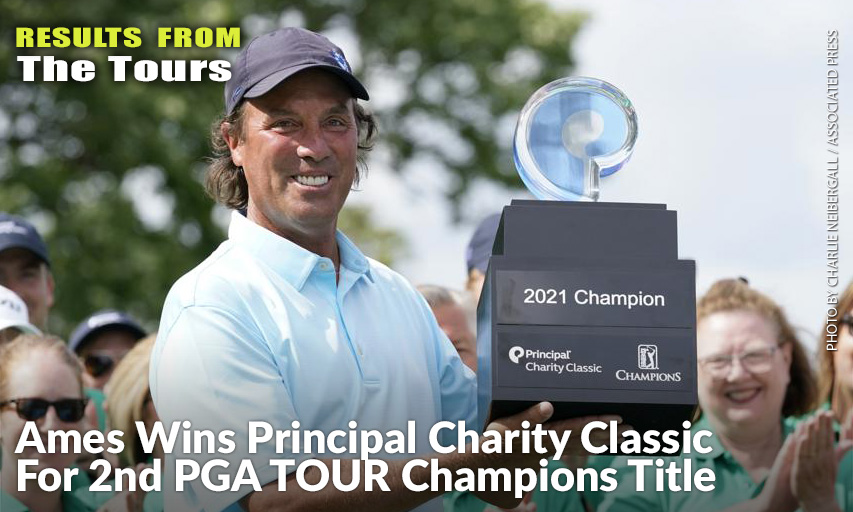 Seven strokes behind Herron entering the round, Ames shot a 5-under 67 for a one-stroke victory over fellow Canadian Mike Weir.

“Everybody else kind of faltered coming in, unfortunately for those, but fortunate for me,” Ames said. “I had a second Atlanta and I had three other top-10s on top of that, so things were starting to shape up. It’s just a matter of putting things together and obviously getting fortunate, which is what happened this week for me.”

A four-time winner on the PGA TOUR, Ames won the 2017 Mitsubishi Electric Classic for his first senior title. The 57-year-old naturalized Canadian citizen from Trinidad finished at 12-under 204 at Wakonda Club.

“It’s the kind of golf course that has to grow on you,” Ames said “You definitely have to play it a few times to understand the nuances of it, the bounces, where to hit it when it’s running: I think this week the superintendent did a fantastic job getting the golf course in the best shape I’ve seen it for the years that I’ve played it.”

Herron bogeyed three of the final five holes in a 76 that left him tied for third at 10 under. He missed a chance for his first senior victory after winning four times on the PGA TOUR.

“Hopefully, I guess you learn from it even at age 51,” Heron said. “It was a little rough. Worked on some swing changes and I think my old swing kind of came back a little bit. I was guiding it a little bit, but it was pretty windy today and just didn’t get any momentum going.”