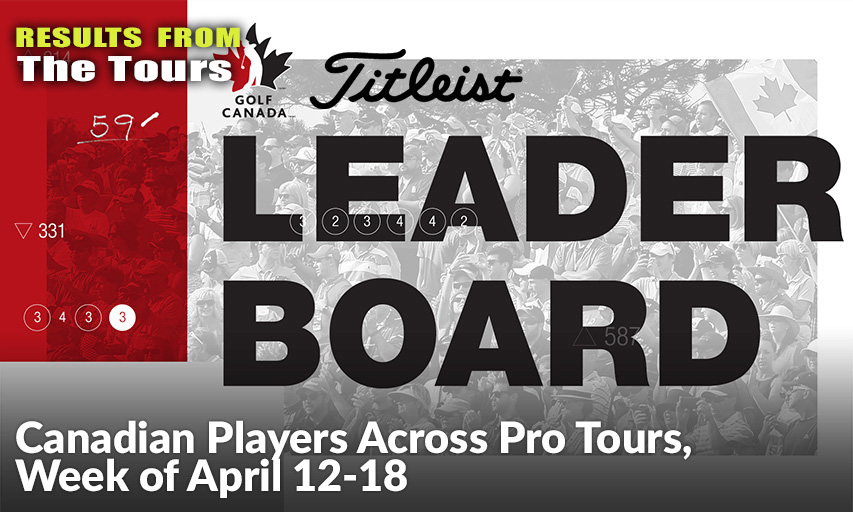 Stewart Cink carded a final round 70 to cap off a dominant, record-breaking week with a victory at the RBC Heritage. Cink set the 36-hole record at Harbour Town (126) and 54-hole tournament record (195) and was just two shots shy of the 72-hole record Webb Simpson set last June. The 47-year-old Cink, who snapped an 11 year winless streak last September, joined Bryson DeChambeau as the only two-time winners this season. Emiliano Grillo and Harold Varner III finished four strokes back in a tie for second. …Corey Conners notched his second straight top 10 result in as many starts and it was his fourth top 10 finish in his last six starts. The result moves him up to a career-best 38th in the World Golf Rankings. ...Mackenzie Hughes finished his first weekend under par since February. In three other weekend finishes since then, he was a combined 7 over par.

Lydia Ko carded a final round 65 to win the Lotte Championship by seven strokes, ending an almost three year winless drought. Ko’s winning score of 28-under 260 was just three strokes shy of the LPGA record of 31 under and her 21 under score after 54 holes was a shot better than the 72-hole tournament record. In her last 100 holes Ko has just one bogey. Sei Young Kim, Inbee Park, Nelly Korda and Irish rookie Leona Maguire all finished tied for second. …Two-time defending tournament champion Brooke Henderson (the tournament was not held in 2020) was looking to become the first three-peat winner on the LPGA Tour in six years. …Golf Canada Young Pro Squad member Anne-Catherine Tanguay recorded her first LPGA result since the 2019 CP Women’s Open

Former U.S. Amateur champion Peter Uihlein built a big lead early with birdies on four of his opening seven holes Sunday on his way to winning the MGM Resorts Championship by four shots. It was the second Korn Ferry Tour victory for Uihlein, and his first since 2017. David Lipsky and Jamie Lovemark, who started the final round one stroke back, finished in a tie for second. …Adam Svensson was the leader through 36 holes after matching the course record with a 64. He had a career-best 11 birdies in the round including eight through a 10 hole stretch.

Ruixin Liu birdied the last four holes and then birdied the second playoff hole to overcome a six-shot deficit and win the Casino Del Sol Golf Classicf. It was her sixth career victory. Morgane Metraux finished runner-up. …Maude-Aimee Leblanc, with her third top 25 result this season, currently sits 5th in the Race for the Card standings. …Rebecca Lee-Bentham notched her first result on the Symetra Tour in over a year. …Golf Canada Young Pro Squad member Maddie Szeryk snapped a string of two straight missed cuts with her result this weekend. …Brittany Marchand’s second round 66 was her best round of the year to date and equalled the lowest round of the day

John Catlin beat Maximilian Kieffer at the fifth playoff hole on Sunday to win the Austrian Open for his third European Tour title. It was Catlin’s third win in 45 appearances, and the 246th win by an American golfer on the European Tour. It was the second time Kieffer had been beaten in a playoff, having lost at the 2013 Open de Espana to Raphael Jacquelin after nine extra holes.

Steve Stricker closed with a 5-under 67 for a one-shot victory in the Chubb Classic. It was the sixth win on the PGA Tour Champions for the U.S. Ryder Cup captain – his first title since the U.S. Senior Open in 2019. Robert Karlsson of Sweden and Monday qualifier Alex Cejka of Germany each made birdie on the final hole to tie for second. ...Mike Weir posted his eighth top 25 finish in 13 starts this year …Stephen Ames birdied the final three holes of the final round for his only under-par round of the event