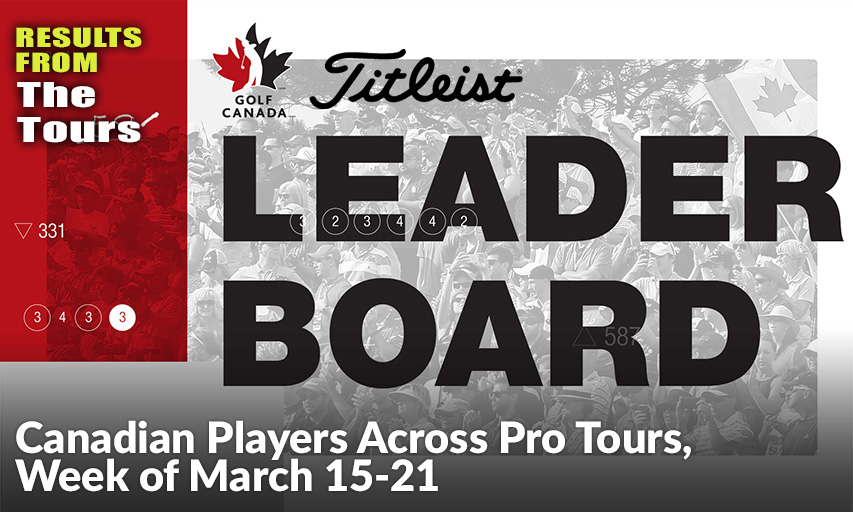 Matt Jones won the Honda Classic by five shots Sunday, matching the largest margin of victory in tournament history, tying the mark set by Jack Nicklaus in 1977 and matched by Camilo Villegas in 2010. Jones, who started the week with a course-record-tying 61, also earned a return invite to the Masters next month. Brandon Hagy celebrated his 30th birthday with a runner-up finish. Five other golfers tied for third. … Adam Hadwin recorded his first top 10 result since July 2020. … Roger Sloan notched his second straight top 30 results. His third round 66 was just one stroke off the low round of the day and his lowest round on the tour since the final round of The RSM Classic last November. …Mackenzie Hughes posted his second top 40 result in his last four starts

Justin Harding carded a bogey-free round of 66 to win the Magical Kenya Open by two strokes. It was a sixth worldwide victory in the last three years for the South African, who had not posted a top 10 result since September. American Kurt Kitayama finished runner-up …Aaron Cockerill posted his best result in 2021 to date

Roberto Diaz of Mexico shot a final round 68 for a one-stroke victory over Peter Uihlein at the Chitimacha Louisiana Open for his first Korn Kerry Tour title. After moving into a tie for the lead with a birdie at No. 14, Uihlein three-putted the par-4 17th and found the water with his tee shot at 18. Despite managing to par the hole, it was enough for Diaz to two-putt for the victory. It is the first professional win for Diaz in 193 starts on the PGA Tour, Korn Ferry Tour and PGA Tour Latinoamerica. …Adam Svensson posted his first top 10 result since July 2020. His third round 65 was just three strokes off the low round of the day. …For only the ninth time in 23 starts, Taylor Pendrith shot 70 or more in the opening round. He remains second on the Tour’s year-long points list.